In this post we examine DSSG project on Predicting and Reducing Adverse Birth Outcomes.

Worldwide mortality rates of children under five have dropped 53% between 1990 and 2015 but have missed the 66% target. 16,000 children under five still die every day. Although this project is US based, where there are less than 25 deaths for every 1000 live births it is a framework that could be expanded to Sub-Saharan Africa where help is needed most and the mortality rate is over 4 times greater. 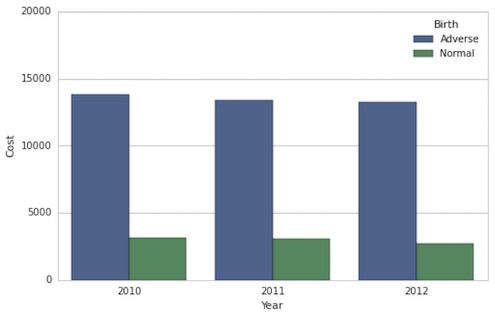 An adverse birth is defined here as a child that is born too early or small, assigned to a neo-natal intensive care unit or dies within their first year. In Illinois there are 25,000 adverse births per year with 1 in 10 babies born pre-term and 1 in 12 with low birth-weights.

To combat adverse births, the Better Birth Outcomes (BBO) initiative was developed by the Illinois Department of Human Services (IDHS) in 2013; it provides prenatal health education, coordination of medical care and other services to at-risk pregnant women. As only 2,000 women can avail of this annually, it was recognised that a data driven approach to identify localities and women who needed support the most should be adopted.

The first step taken in this project was to expand the definition of an adverse birth from pre-mature births only, to the definition outlined above. Previously, the IDHS used maps of county-level pre-term rates to determine facility locations. To improve these locations, a cluster analysis was performed on the combined data sources of: granular census track data and data from mothers who previously participated in BBO. This analysis highlighted areas with a high-concentration of adverse births and service provision mismatches of originally placed facilities.

Once they found the most at risk locations, it was necessary to identify individuals who needed support the most. Originally, a 17 question, evidence based assessment was used to identify at-risk women but it was found that not all questions were equally predictive. The impact of each question on the likelihood of an adverse birth was measured and the importance of each item was used to re-weight each question accordingly. This allowed each woman to be placed on a more individualised risk continuum, estimated to be 1.5 times more accurate than the previous method. Finally a web application was developed to allow practitioners more easily interface with the output of the project. These new approaches will help IDHS find pregnant women in Illinois with the greatest needs and provide them with essential services to increase the chance of a healthy birth and child.