Modern big data discovery tools enable all employees to access the data, streamlining the data prep process, and allowing data scientists to spend more time on advanced analytics. The infographics in this post show the evolution of the data scientist from data drudgery to modern data science for all.

The data scientist role has been called the “hot job of the decade” – Harvard Business Review has even dubbed it “the sexiest job of the 21st century.” Regardless of what you call it, one thing is clear: the field of data science is exploding. At the center of it all are data scientists.

Over the last few years, there has been a shift. Data scientists are no longer working in isolation – data needs to be accessed by all departments. Modern big data discovery tools such as Platfora enable all employees to access the data – streamlining the data prep process by combining traditionally separate tools and allowing data scientists to spend more time using advanced analytics capabilities to find hidden insights that solve business problems. The graphics below show the evolution of the data scientist – marking the transition from data drudgery to modern data science for all.

A company in the modern age of data science integrates input from data scientists throughout its workflow and across departments. These data scientists work alongside executives and engineering teams to solve crucial business challenges and bring value to various aspects of the organization – from customer success to internal operations. With the use of a big data discovery platform and advanced analytics capabilities of tools such as Apache Spark, modern data scientists are able to transform raw data into visualizations and on-demand insights in a matter of minutes. These technologies liberate data scientists from hours on end typically exhausted on data preparation, freeing them to focus on more serious matters around planning and business decision making. 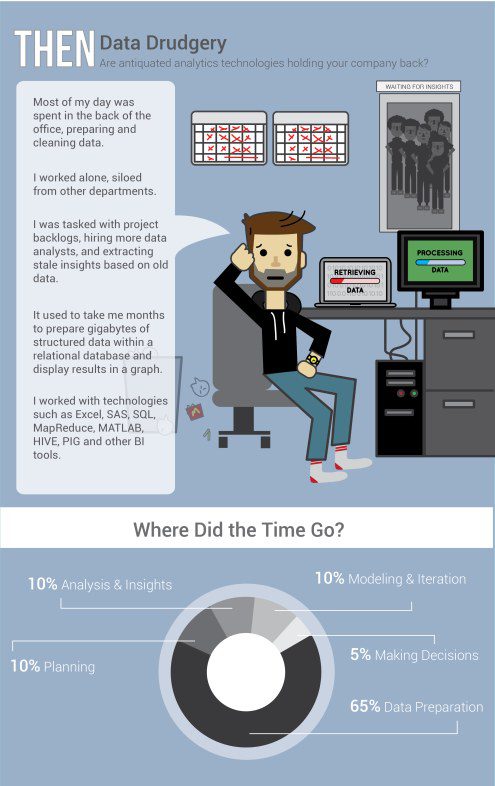