The terrorism threat advisory system was designed to give the public prior warning to when terrorist plots are about to unfold. However, the analysis shows that this system is not more helpful than monkey throwing a dart. 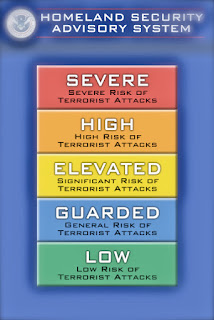 This level of bungling would be humorous if the stakes weren’t so high.  The terrorism threat advisory system (initially in the U.S. termed Homeland Security Advisory System) was designed to give the public prior warning to when terrorist plots are about to unfold.  Granting the public a meaningful chance to raise their guard, and be more vigilant with their state of mind.  At a national level, this 5 candy-color scale would only go as high as orange, which it did a half-dozen times (covering a total of >200 days).  But as we’ll see below, every one of the 19 terrorist attacks during the time this system was in place, occurred not during the orange threat level, but when we were all caught off-guard loosening up within the fairly neutral yellow status!  And the system was not capable of preventing barbarism either, as not one of the 10 failed attacks also occurred under the orange code.

All of this absurdity happens, regrettably, as terrorist attacks in the U.S. occur at an elevated pace.  Even with the new (and equally blundered) National Terrorism Advisory System, the number and pace of new terrorist activities continues to soar throughout its nearly 5 year existence.  Unless you have been dwelling under a bunker for the past several years, you couldn’t have missed it.  All the while the federal government’s threat status has stayed muted, as if again whistling Dixie in the chronic terror war.  And finally succumbing (way-too-late) with an alert on December 16. We can see on the chart below that 94% of the time, the Homeland Security Advisory System (HSAS) was in the more neutral yellow state.  However, this is when 99% of the attacks and 100% of the failed attacks took place.  In other words, this official orange status Americans have hypnotized over was never around to warn anyone, of anything! One would have been more correct simply rolling die, every time one was curious about the threat level (e.g., only be fearful when the sum of die equals 12).  More dispiriting, one would be even safer simply doing the exact opposite of what the government’s threat assessment recommends. More on these probabilities in a moment. 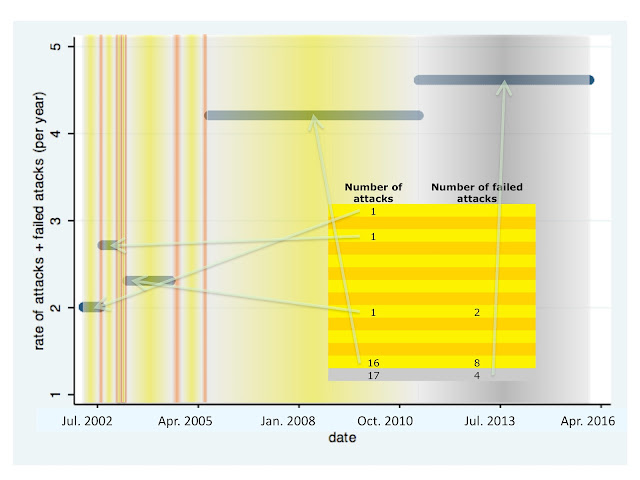 We see in the information above that there were 6 raises of the terror alert in >9 years (with a typical duration of 36 days each).  Those periods were: Sep 2002, Feb 2003, Mar-Apr 2003, May 2003, Aug 2004, Nov 2004, Jul-Aug 2005. One would think that there was simply not enough opportunities for our national threat system to evidence its power.  This is incorrect however, and probability theory starts by knowing that the purpose of these advisory systems is to err on the side of caution. And anyway, a skilled apparatus capable of guessing correct, just ¾ of the time, would completely miss foreseeing an attack (just from bad luck) given 6 threat advisory attempts less than 0.05% of the time!  In other words our national intelligence apparatus is not at all successfully skilled.  See links here, here for more information.

Even a mad monkey (here, here), haphazardly throwing 6 darts at the calendar (each time carving out a random 1-month period), would (again by sheer luck) include at least 1 of the 19 terrorist attacks, 99% of the time! So with a very high statistical significance, the mathematical evidence here heavily weights towards the HSAS proving itself to be totally ineffectual, in warning anyone of terrorist threats.

This point continues April 2011, for the subsequent ~4.7 years under the National Terrorism Advisory System (NTAS), as shown in silver on the chart above.  Where there has been an additional 17 attacks (plus 4 more failed attacks).  This amounts to a record rate of terrorism [(17+4)/4.7] threats skyrocketing to the upper-right of the chart above.  Not once during these many Obama Administration years did the terror status alert get escalated by the even less sophisticated NTAS (perhaps explaining why Americans travel oblivious of surging terrorism).

Finally bowing to pressure on December 16, after the one-two punch of the Paris attacks and the San Bernardino attack, the government raised the terror threat.  It’s very late however to ignorantly warn of future attacks, bewilderingly interlaced with optimistic messages of defeating extremists, only after being surprised at completely missing the prior terrorist attacks.  This is a repeat of the knee-jerk reaction we saw from the HSAS.  And investors know that ill feeling, as we see the same thing in financial markets, when experts falsely warn of risk only after it catches everyone off-guard and is completely over.

This (non)performance track record causes Americans to lose faith in our national alert system designed to safeguard us, when instead the all-clear “thumbs up” is a mere reflection of nothing.  A terrible system where any victories in you not being killed is just through chance alone. 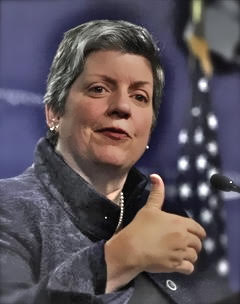 We see in summary that the War on Terror, as seen through the eyes of the national terror alert system, is a political show with an odd coloring system that changes altogether out of sync with the increasing, real threats. A demanding public has forced the Department of Justice to replace the HSAS terror alert system with another equally bad system. It will be of great interest to see if the current NTAS shows an increased terror status before the elections, given the surge in global terrorism, obvious to everyone.  But hey don’t worry about it: Janet Napolitano is giving you an audacious thumbs up.