Apache Spark went through a lot in 2015. Get a solid review from Databricks, the steward organization founded by the creators of Spark and the drivers of its innovation.

2015 has been a year of tremendous growth for Apache Spark. The pace of development is the fastest ever. We went through 4 releases (Spark 1.3 to 1.6) in a single year, and each of them added hundreds of improvements.

The number of developers that have contributed code to Spark has also grown to over 1000, doubling from 500 in 2014. To the best of our knowledge, Spark is now the most actively developed open source project among data tools, big or small. We’ve been humbled by Spark’s growth and the community that has made Spark the project it is today.

At Databricks, we are still working hard to drive Spark forward — indeed, we contributed about 10x more code to Spark than any organization in 2015. In this blog post, we wanted to highlight some of the major developments that went into the project in 2015:

With this rapid pace of development, we are also happy to see how quickly users adopt new versions. For example, the graph below shows the Spark versions run by over 200 customers at Databricks (note that a single customer can also run multiple Spark versions): 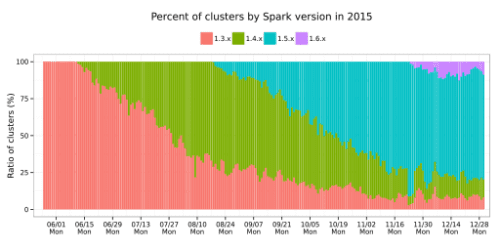 As you can see from the graph, Spark users track the latest versions pretty well. Merely 3 months after Spark 1.5 was released, the majority of our customers were running it. And a small fraction have been using Spark 1.6, as it was available as a preview package since late November.

Before Spark, the primer to Big Data included a daunting list of concepts, from distributed computing to MapReduce functional programming. As a result, Big Data tooling was used primarily by data infrastructure teams with an advanced level of technical sophistication.

The first major theme of development for Spark in 2015 was to build simplified APIs for big data, similar to those for data science. Rather than forcing data scientists to learn a whole new development paradigm, we wanted to substantially lower the learning curve and provide something that resembles the tools they are already familiar with.

To that end, we introduced three major API additions to Spark.

Although they have only been released for a few months, already 62% of Spark users reported via our 2015 Spark Survey that they are using the DataFrame API. Just as revealing, survey respondents had predominantly identified themselves as data engineers (41%) or data scientists (22%). This uptick in interest by data scientists is even more apparent when evaluating the languages used in Spark with 58% (49% increase over 2014) of respondents using Python and 18% already using the R API.

Since we released DataFrames, we have been collecting feedback from the community. One of the most important pieces of feedback is that for users building larger, more complicated data engineering projects, type safety provided by the traditional RDD API is a useful feature. In response to this, we are developing a new typed Dataset API in Spark 1.6 for working with these kinds of data.

To application developers, Spark is becoming the universal runtime. Applications only need to program against a single set of APIs, and can then run in a variety of environments (on-prem, cloud, Hadoop, …) and connect to a variety of data sources. Earlier this year, we introduced a standard pluggable data source API for 3rd-party developers that enables intelligent pushdown of predicates into these sources. Some of the data sources that are now available include: 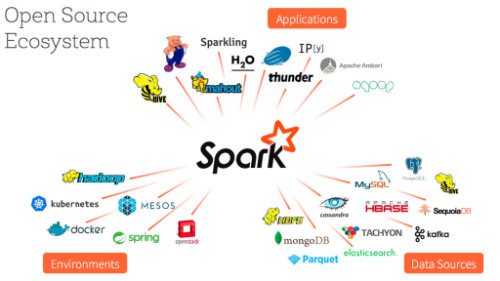 To make it easier to find libraries for data sources and algorithms, we have also introduced spark-packages.org, a central repository for Spark libraries.

Another interesting trend is that while the early adopters of Spark were predominantly using Spark alongside Hadoop, as Spark grows, Hadoop no longer represents the majority of Spark users. According to our 2015 Spark Survey, 48% of Spark deployments now run on Spark’s standalone cluster manager, while the usage of Hadoop YARN is only around 40%.

According to our 2015 Spark Survey, 91% of users consider performance the most important aspect of Spark. As a result, performance optimizations have always been a focus in our Spark development.

Earlier this year we announced Project Tungsten – a set of major changes to Spark’s internal architecture designed to improve performance and robustness. Spark 1.5 delivered the first pieces of Tungsten. This includes binary processing, which circumvents the Java object model using a custom binary memory layout. Binary processing significantly reduces garbage collection pressure for data-intensive workloads. It also includes a new code generation framework where optimized byte code is generated at runtime for evaluating expressions in user code. Throughout the 4 releases in 2015, we also added a large number of built-in functions that are code generated, for common tasks like date handling and string manipulation.

In addition, data ingest performance is as critical as query execution. Parquet has been one of the most commonly used data formats with Spark, and Parquet scan performance has a pretty big impact on many large applications. In Spark 1.6, we introduced a new Parquet reader that uses a more optimized code path for flat schemas. In our benchmarks, this new reader increases the scan throughput by almost 50%.

Another aspect where Databricks invested heavily in is training and education for Spark users. In 2015, we partnered with UC Berkeley and UCLA and offered two MOOCs. The first course, Introduction to Big Data with Apache Spark, teaches students about Spark and data analysis. The second course, Scalable Machine Learning, introduces students to machine learning with Spark. Both courses are freely available on the edX platform. Over 125,000 students registered for the first delivery of the two classes, and we plan to offer them again this year.

We are proud of the progress we have made together with the community in one year and are thrilled to continue working to bring even more great features to Spark. Stay tuned on our blog for new developments in 2016.

About: Databricks was founded by the team at UC Berkeley AMPLab that created and continues to drive Apache Spark. Their vision is to make big data simple for data scientists, engineers, developers, and business users alike.