We often look back at the past year and an overall history of rare events, and try to then extrapolate future odds of the same rare event, based on that. We illustrate here, that rare past events have no usefulness in understanding the rarity of the same events in the future!

As we head into 2016, we can often look back at the past year and an overall history of rare events, and try to then extrapolate future odds of the same rare event, based on that. See this recent, confusing CNBC segment for example, where two Wall Street strategists (Tobias Levkovich and David Bianco) both mishandled their understanding of recent market data (facts) and how to think about their odds going forward (probability theory).  What we will illustrate here is that recherché past events has no usefulness in understanding the rarity of the same events in the future!  So the flat or worse 2015 for the markets would be rare to some degree, but that is just a trivial understanding that can’t be used to guess the future.

As a first matter, let’s put aside the technical aspects of the dispute on the CNBC video. The market hasn’t rarely been down or flat two years straight. Despite the long-term uptrend of the stock market, this rare streak has happened a bit since the S&P started in the early 1950s:

We use any annual market change of within 3% (such as 2015) as the definition of flat.  Also in 2001, we see this streak immediately repeat again (so which combination of two or three years should one use to data mine?) Now as a second matter, we should note that we are sitting at the end of 2015 (possibly within, as opposed to the end of, a 2-year or greater pattern).  And one can’t simply set-up their backtest by mixing in other conditions that you feel like, such as recessions in that first of two years.  So given that context, there is plenty of identical market observations from the past in which to backtest such asset allocation ideas. On an aside, Ritholtz (a Bloomberg contributor) gets it right if you want to stay locked at looking at  responses to just 1-year flat periods in the market.

The larger scheme here is that these rare market statistics are (perhaps) fun to talk about, but have no predictive power for the future (other than in rare circumstances where one gets lucky). If any of the talking financial heads would confess to this, then there wouldn’t be anyone on Wall Street able to hawk excess trading and risk management services. After the global financial crisis that I worked on the rescue from, it’s easy to imagine that even those on Wall Street believe their own market prediction skills (here, here). And their complete failure again in getting the S&P target for 2015 (I meant 2016) is just the latest example of their shameful inabilities.

The colorful illustration below (different from but similar concept to the Golden ratio φ of 1.618034…, while below we see it is a ratio of plainly 2) helps show these 6 generated time periods in which to test.  The smallest period is actually ~252 days (1 year), but our probability set-up gives it the statistical power of nearly 11 years! 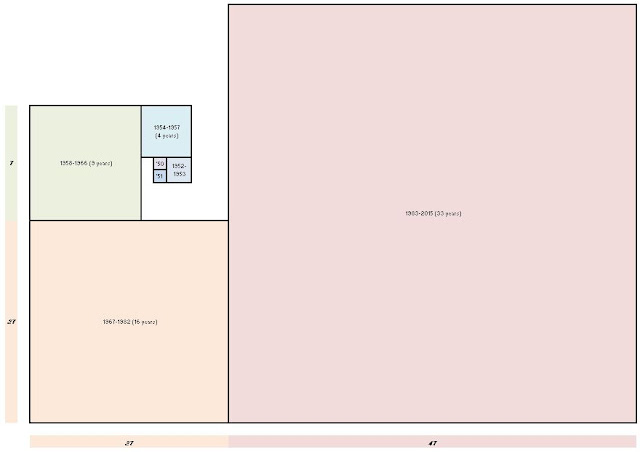 Looking at exotic trends is different from the simple, mainstream financial analysis which only (at best) looks at frequencies (here, here) or “reactions” to market changes (e.g., a scatterplot showing what generally happens the day after a market crash).  We must appreciate that trends in black days do not always hold.  Whether they are bundled into in cute engineering theories, such as a Black Swan model, designed to show humans can reach the breaking point and break through.  Or whether they are enveloped into periods of policy change, such as 1987’s Black Monday, where the single day loss of more than 20% has never occurred since (not even during the wildest, 15 day stretch of 2008).