A discussion of three major approaches to building smart machines - Classic AI, Simple Neural Networks, and Biological Neural Networks - and examples as to how each approach might address the same problem. 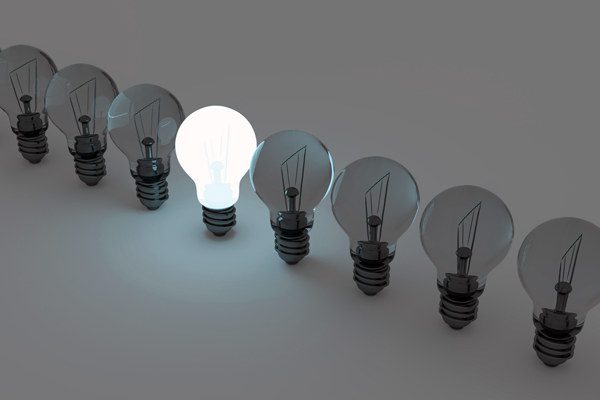 We are frequently asked how we distinguish our technology from others. This task is made difficult by the fact that there is not an agreed vocabulary; everybody uses the above terms (and other associated terms) differently. In addition, the commonly understood meaning of some of these terms has evolved over time. What was meant by AI in 1960 is very different than what is meant today.

In our view, there are three major approaches to building smart machines. Let’s call these approaches Classic AI, Simple Neural Networks, and Biological Neural Networks. The rest of this blog post will describe and differentiate these approaches. At the end, we’ll include an example as to how each approach might address the same problem. This analysis is intended for a business rather than technical audience, so we simplify somewhat and thus beg the indulgence of technical experts who might quibble with the details.

The earliest approaches to AI were computer programs designed to solve problems that human brains performed easily, such as understanding text or recognizing objects in an image. Results of this work were disappointing and progress was slow. For many problems, researchers concluded that a computer had to have access to large amounts of knowledge in order to be “smart”. Thus they introduced “expert systems”, computer programs combined with rules provided by domain experts to solve problems, such as medical diagnoses, by asking a series of questions. If the disease was not properly diagnosed, the expert adds additional questions/rules to narrow the diagnosis. A Classic AI system is highly tuned for a specific problem.

IBM’s Watson could be viewed as a modern version of a Classic AI system. It focuses on creating a sophisticated knowledge base on a particular issue. Although Watson doesn’t rely on encoded rules, it requires the close involvement of domain experts to provide data and evaluate its performance. Classic AI has solved some clearly defined problems but is limited by its inability to learn on its own and by the need to create specific solutions to individual problems. In this regard, in spite of it being called artificial intelligence, it has very little in common with general human intelligence.

When the limits of Classic AI became clear, some researchers turned to the idea that intelligent machines should be modeled after the human brain by simulating networks of neurons. The resulting technology, artificial neural networks (ANNs), was created over 50 years ago when very little was known about how real neurons worked. Since then, neuroscientists have learned a great deal about neural anatomy and physiology, but the basic design of ANNs has changed very little. Therefore, despite the name neural networks, the design of ANNs has little in common with real neurons. Instead, the emphasis of ANNs moved from biological realism to the desire to learn from data without human supervision. Consequently, the big advantage of Simple Neural Networks over Classic AI is that they learn from data and don’t require an expert to provide rules. Today ANNs are part of a broader category called “machine learning” which includes other mathematical and statistical techniques. Machine learning techniques, including ANNs, look at large bodies of data, extract statistics, and classify the results.

ANNs have recently evolved into Deep Learning networks, whose advances have been enabled by access to fast computers and vast amounts of data for training. Deep Learning has successfully addressed many problems such as image classification, language translation and identifying spam in email.

Although Simple Neural Network systems can solve many problems that were not solvable using Classic AI, they have limitations. For example, they don’t work well when there is limited data for training, and they don’t handle problems where the patterns in the data are constantly changing. Essentially, the Simple Neural Network approach is a sophisticated mathematical technique that finds patterns in large, static data sets.

There is a deeper and more important issue beyond the current limitations of Classic AI and of Simple Neural Networks. In our view, both of these approaches are not on a path to achieve true machine intelligence; they don’t provide a roadmap to get there, which brings us to the third approach.

Everyone agrees that the human brain is an intelligent system; in fact it is the only system everyone agrees is intelligent. We believe that by studying how the brain works we can learn what intelligence is and what properties of the brain are essential for any intelligent system. For example we know the brain represents information using sparse distributed representations (SDRs), which are essential for semantic generalization and creativity. We are confident that all truly intelligent machines will be based on SDRs. SDRs are not something that can be added to existing machine learning techniques; they are more like a foundation upon which everything else depends. Other essential attributes include that memory is primarily a sequences of patterns, that behavior is an essential part of all learning, and that learning must be continuous. In addition, we now know that biological neurons are far more sophisticated than the simple neurons used in the Simple Neural Network approach -- and the differences matter. We believe you can’t get to machine intelligence by incrementally building upon the simple neuron approach, but instead must throw it away and start over with a more realistic biological approach.

Numenta’s technology, Hierarchical Temporal Memory (HTM), is the best example of the Biological Neural Network approach. Today, HTM systems are able to learn the structure of streaming data, make predictions and detect anomalies. They learn continuously from unlabeled data. By taking a robust biological approach, the brain gives us a roadmap of where to direct our work in the future, such as completing our understanding of behavior, attention and short term memory. This roadmap distinguishes HTM from other techniques and makes it the best candidate for creating intelligent machines.

Let’s take a problem and think about how it might be addressed in the three different approaches. Again, we oversimplify a bit in order to distinguish the main differences of the three approaches.

We have been asked to detect rogue behavior of an employee within an organization. For example, companies with confidential information want to know if people with internal access are abusing that information. A change in employee behavior might be totally legitimate – the employee has changed roles, and now has new responsibilities – or it could be a problem.

Rogue behavior is difficult to identify. The Classic AI approach would address this problem with a series of rules. For example, let’s consider an analyst who works with confidential customer data. The Classic AI system would need a human to figure out likely problem scenarios then program the system to look for those scenarios. This solution might flag any instance where the analyst has accessed the customer file more than 10 times in the month. As the Classic AI system is deployed, and false positives and false negatives are examined, the rules would be strengthened. The new rule might say that an analyst accessing customer data in the first few days of the month is not flagged, but it is for the remainder of the month.

The Simple Neural Network approach would start with lots of historical data, namely a large database of known problem scenarios. The Simple Neuron Network system might figure out, for example, that abuse of this information only happens in the last week of the month. The system identifies such features and then classifies an individual as “unusual” or “not unusual”. Although it sounds similar to the Classic AI approach, in this case, the features are learned from the data, not from an expert.

Both approaches have some problems. With the Classic AI solution you need to know what you are looking for. But criminals constantly change strategies to avoid detection and the rules don’t adapt. The Simple Neural Network approach requires a lot of labeled data to be able to find common features, but this kind of data generally doesn’t exist for unusual behavior. Both approaches are unsuitable for modeling individual behaviors and require the system to be retrained when new patterns arise.

The Biological Neural Network approach would stream the data from each analyst (such as the details of the files routinely accessed, numbers of emails, numbers of postings, etc.) and would automatically build individual models of normal behavior for each person. The system would then predict what would be normal for each analyst and would flag anything abnormal. One could stream a lot of different metrics without knowing which will be important – all the modeling is automated. The Biological Neural Network system does not need to know what it is looking for, can model each individual separately, and continuously learns as data changes.

In summary, below are the characteristics of the three different approaches: 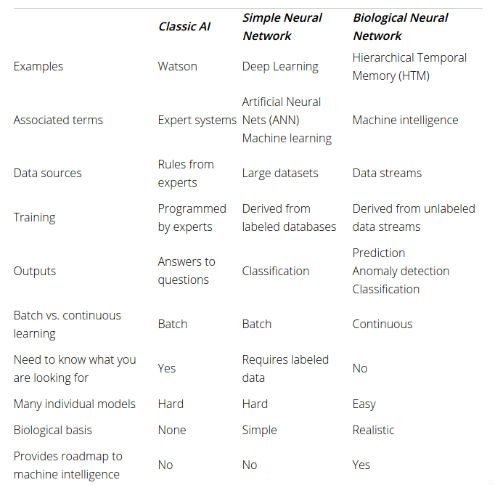 We return to the question of terminology that we started this post with. Our feeling is that the term “artificial intelligence” has been used in so many ways that it is now confusing. People use AI to refer to all three approaches described above, plus others, and therefore has become almost meaningless. The term “machine learning” is a more narrowly defined term for machines that learn from data, including simple neural models such as ANNs and Deep Learning. We use the term “machine intelligence” to refer to machines that learn but are aligned with the Biological Neural Network approach. Although there still is much work ahead of us, we believe the Biological Neural Network approach is the fastest and most direct path to truly intelligent machines.

About: Numenta’s mission is to lead a new era of machine intelligence. Their technology, Hierarchical Temporal Memory (HTM), is a detailed computational framework based on principles of the brain along with an extensive suite of software operating on HTM principles. Their HTM learning algorithms are available through the NuPIC open source community and are embedded in their commercial applications.