Q4. Explain what precision and recall are. How do they relate to the ROC curve?

Here is the answer from KDnuggets FAQ: Precision and Recall:

Calculating precision and recall is actually quite easy. Imagine there are 100 positive cases among 10,000 cases. You want to predict which ones are positive, and you pick 200 to have a better chance of catching many of the 100 positive cases.  You record the IDs of your predictions, and when you get the actual results you sum up how many times you were right or wrong. There are four ways of being right or wrong:

Makes sense so far? Now you count how many of the 10,000 cases fall in each bucket, say:

See also a very good explanation of Precision and recall in Wikipedia. 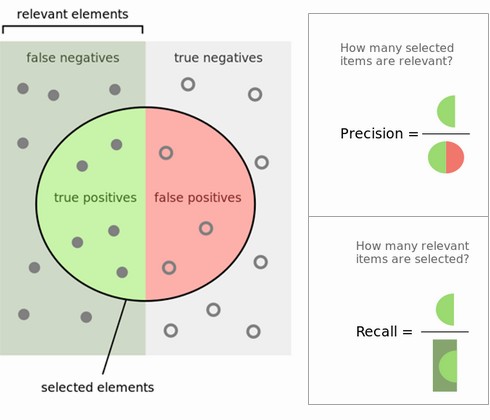 ROC curve represents a relation between sensitivity (RECALL) and specificity(NOT PRECISION) and is commonly used to measure the performance of binary classifiers. However, when dealing with highly skewed datasets, Precision-Recall (PR) curves give a more representative picture of performance. See also this Quora answer: What is the difference between a ROC curve and a precision-recall curve?.

Q5. How can you prove that one improvement you've brought to an algorithm is really an improvement over not doing anything?

Often it is observed that in the pursuit of rapid innovation (aka "quick fame"), the principles of scientific methodology are violated leading to misleading innovations, i.e. appealing insights that are confirmed without rigorous validation. One such scenario is the case that given the task of improving an algorithm to yield better results, you might come with several ideas with potential for improvement.

An obvious human urge is to announce these ideas ASAP and ask for their implementation. When asked for supporting data, often limited results are shared, which are very likely to be impacted by selection bias (known or unknown) or a misleading global minima (due to lack of appropriate variety in test data).

Data scientists do not let their human emotions overrun their logical reasoning. While the exact approach to prove that one improvement you've brought to an algorithm is really an improvement over not doing anything would depend on the actual case at hand, there are a few common guidelines:

One common way to achieve the above guidelines is through A/B testing, where both the versions of algorithm are kept running on similar environment for a considerably long time and real-life input data is randomly split between the two. This approach is particularly common in Web Analytics.

Q6. What is root cause analysis?

Root cause analysis (RCA) is a method of problem solving used for identifying the root causes of faults or problems. A factor is considered a root cause if removal thereof from the problem-fault-sequence prevents the final undesirable event from recurring; whereas a causal factor is one that affects an event's outcome, but is not a root cause.

Root cause analysis was initially developed to analyze industrial accidents, but is now widely used in other areas, such as healthcare, project management, or software testing.

Here is a useful Root Cause Analysis Toolkit from the state of Minnesota.

Essentially, you can find the root cause of a problem and show the relationship of causes by repeatedly asking the question, "Why?", until you find the root of the problem. This technique is commonly called "5 Whys", although is can be involve more or less than 5 questions.

Fig. 5 Whys Analysis Example, from The Art of Root Cause Analysis .

Those are economics terms that are not frequently asked of Data Scientists but they are useful to know.

Price optimization is the use of mathematical tools to determine how customers will respond to different prices for its products and services through different channels.

Big Data and data mining enables use of personalization for price optimization. Now companies like Amazon can even take optimization further and show different prices to different visitors, based on their history, although there is a strong debate about whether this is fair.

Similarly, Price elasticity of supply is an economics measure that shows how the quantity supplied of a good or service responds to a change in its price.

Competitive intelligence: the action of defining, gathering, analyzing, and distributing intelligence about products, customers, competitors, and any aspect of the environment needed to support executives and managers making strategic decisions for an organization.

Tools like Google Trends, Alexa, Compete, can be used to determine general trends and analyze your competitors on the web.