Onalytica gives us a new list of the top 100 Big Data influencers and brands, and provides some insight into both the relationships between influencers and their selection methodology.


Onalytica, a firm which specializes in social network analysis and influencer relationship software, recently released their latest Top 100 Big Data Influencers and Brands Report. The report not only lists the top 100 in each category but also graphically explores the relationships between them. As would be expected of an organization which specializes in this kind of data analysis, Onalytica has also shared their selection methodology in this informative blog post.

The report's website shares a list of the top 50 in each category (influencers and brands), while the downloadable full report contains the top 100. As a taste of what to expect, here is a list of the Top 20 Influencers:


Below is a graph of the relationships between the top influencers (a similar graph exists on Onalytica's website for top brands). Click to enlarge. 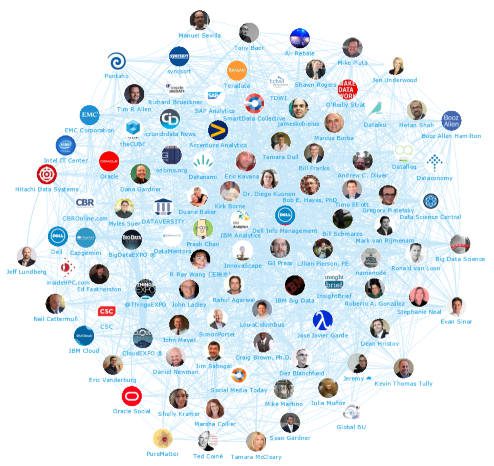 Onalytica also reached out to some of the top influencers for exclusive insight into what 2016 may hold for Big Data, and included some of this feedback as quotes. Kirk Borne, Principal Data Scientist with Booz Allen Hamilton and #1 ranked influencer, had this to say:

Big Data has moved beyond its original hype phase, and even beyond its concept phase, and is now entering the productization and monetization phase. Every organization that is collecting vast sums of data now see that as an asset to generate better outcomes: new discoveries, improved decisions, and innovative products.

When I first started writing about Big Data some five years ago, I thought it was about the search for a needle in a haystack. Now it’s clear to me that breakthrough analytic discoveries often have little to do with what you thought you were looking for.


And KDnuggets' own Gregory Piatetsky-Shapiro had the following to say:

Big Data, GPUs, and better algorithms will make 2016 a breakout year for Deep Learning, which will achieve human or superhuman performance in many areas, with a focus on speech, image, and video recognition and analysis.


There is much more exclusive insight shared on Onalytics site, so visit and have a look for yourself. You might even find another KDnuggets writer included further on down the list.


The full report can be downloaded from Onalytica's website.