Around the World in 60 Days: Getting Deep Speech to Work in Mandarin

Baidu continues to make impressive gains with deep learning. Their latest achievement centers on Mandarin speech recognition, which you can read about here from the researchers involved in the project.

At SVAIL (Silicon Valley AI Lab), our mission is to create AI technology that lets us have a significant impact on hundreds of millions of people. When we did the original Deep Speech work [6] in English, it became clear that the shortest path to achieving our mission would be to get the system working in Mandarin Chinese. In our recent paper [1], we showed our results in Mandarin. In just a few months, we had produced a Mandarin speech recognition system with a recognition rate better than native Mandarin speakers. The biggest change we had to make for our Deep Speech system to work in Mandarin was increasing the size of our output layer to accommodate the larger number of Chinese characters (see figure 1). Here we want to discuss what we did to adapt the system to Mandarin and how the end-to-end learning approach made the whole project easier. 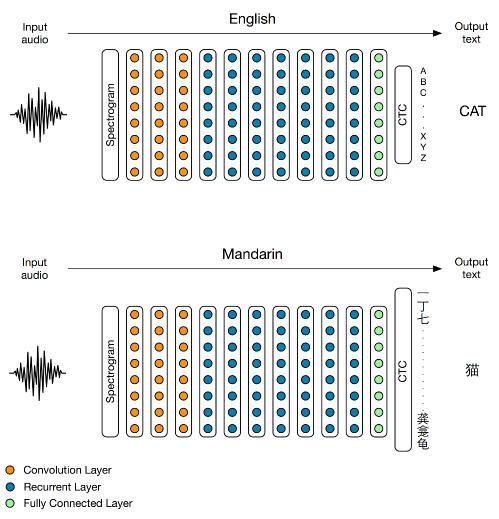 Figure 1. Architecture of the DS2 system used on English versus Mandarin. The only change is the larger output layer in Mandarin that accommodates the 6000 Mandarin characters, as opposed to the 29 we use in English.

2. How End-To-End Learning Made Switching to Mandarin Easier

Chinese is considered one of the hardest widely spoken languages for English speakers to learn for several reasons [7]. First, unlike English, Mandarin is a tonal language. This means that changes in pitch actually convey different words, rather than just intentions as in English. Secondly, the language has more than 20,000 different characters, around 6,000 of which are commonly used [10]. Thirdly, the writing system doesn’t use spaces to delimit different words.

Traditional speech recognition systems have many components that are necessary to achieve good accuracy with small training data sets. But the complexity of these systems exacerbates the challenges of adapting a speech recognition system to Mandarin. The end-to-end approach used in Deep Speech allowed us to achieve state-of-the-art results quickly with a minimal amount of effort geared towards domain specific adaptation. Below we cover how our end-to-end approach helped us deal with these problems.

Traditional speech recognition systems first convert the raw audio signal into audio features such as mel-frequency cepstral coefficients (MFCCs) in order to preserve and amplify the speech related information in the audio signal while reducing the input dimension [3]. These features suppress some of the pitch information that is unimportant for recognizing words in English but essential for tonal speech recognition. Researchers adapting the system to a tonal language like Mandarin may need to add new features containing pitch information to get good performance [9, 11].

Deep Speech doesn’t use specialized features like MFCCs [1]. We train directly from the spectrogram of the input audio signal. The spectrogram is a fairly general representation of an audio signal. The neural network is able to learn directly which information is relevant from the input, so we didn’t need to change anything about the features to move from English speech recognition to Mandarin speech recognition.

Traditional speech recognition systems use the audio input features to predict abstract units of sound known as phonemes. Before training begins, researchers come up with a mapping from each of the words in their vocabulary to sequences of phonemes. This mapping is known as a lexicon. Usually linguists build the lexicon by agreeing on the phonetic representation of a core set of words. To augment the size of the vocabulary, a statistical model or rule-based system can also be used to estimate the phonetic representation of other words [8]. These phonemes are then aligned in time with short 10 millisecond frames of audio in an iterative training process. When switching to a new language with a traditional speech recognition system, a whole new lexicon must be hand crafted. In the case of Mandarin, the phonemes will contain tone information, and word segmentation may be necessary (see section 2.3) [11].

With the Deep Speech network, constructing a new lexicon in Mandarin is unnecessary. Deep Speech uses a deep recurrent neural network that directly maps variable length speech to characters using the connectionist temporal classification loss function [4]. There is no explicit representation of phonemes anywhere in the model, and no alignment needs to be done. This saves us a great deal of work and language specific adaptation that would require knowledge of Mandarin linguistics.