The Rise Of The Robot

Atlas, the latest robot from Google's Boston Dynamics a pretty resilient chap. He can trudge through uneven snow, be knocked off his feet and get up again. and do work that can take place in any warehouse. We examine what it means for our future.

By Matt Reaney, BigCloud.io on March 3, 2016 in Google, Humans vs Machines, Robots

Atlas from Boston Dynamics (a subsidiary of Google) is a pretty resilient chap, judging by the video below. He can trudge through uneven snow, be knocked off his feet and get up again (in an eerily similar way to the film Real Steel), and perform the sorts of menial tasks that might take place in any warehouse or shop storeroom across the country.

In fact, it is hard to believe that there isn’t a human in there somewhere.

The mechanical limitations of robots have meant that they have thus far not had so many applications in the real world (outside the military), but over the next 5-10 years it seems that they will join us in mainstream life. When this functionality is combined with already sophisticated artificial intelligence systems, the step to a robot that thinks about its next move independently is not so far away.

In the video, the robot is pushed away from a box with a hockey stick. Its tame response is to recalibrate itself and try to pick up the box again. If it were thinking rationally, maybe its reaction should be to eliminate the person who is doing the pushing, and then it would be free to pick up the box in peace…

This scenario plays out in the film “Ex Machina” (with recent Oscar winner Alicia Vikander). You cannot quite predict what is going on in the android’s head for the entire length of the film, and the ending is so unexpected that it truly makes you stop and think… what if.

Humanity seems to be on a constant mega quest to improve ourselves, but it sometimes seems to me that in doing so we are starting to replace ourselves. 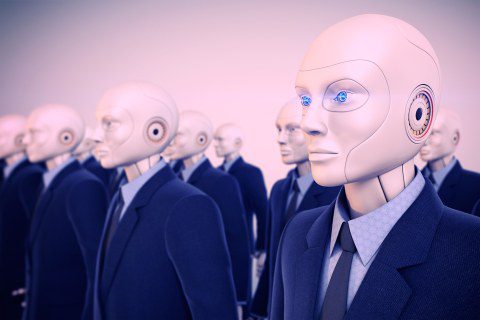 Our kids no longer play with each other so much in the park, they chat and play in a virtual world (admittedly with other “real” children). How far is the day that parents can program a virtual friend to play with their kids, together with all the desired behavioural traits? Students will no longer go through the rituals of university – they will simply sit MOOCs in a virtual lecture room. Algorithms are now even being introduced to grade the work of those students.

On the physical side of things, 3D printing is about to make a mockery of manufacturing, robots will soon be servicing our every need, and trucks will be driving themselves the length and breadth of our countries (truck driver is the most common job in most U.S. states).

I am proud to work in Big Data, but when will that “data” become so “big” that only artificial intelligence can process it and make suitable decisions from it? You need a pretty big brain to be a Data Scientist, and some of the guys that we place are amongst the most intelligent people on the planet. However, even they tell me stories about when they had to shrug their shoulders and admit defeat when confronted with a certain problem.

Robots and artificial intelligence won’t admit defeat – they will simply keep computing until they reach a suitable conclusion.

In watching Atlas being pushed away from the box with a hockey stick, that is what worries me slightly. The robots are indeed rising…