The puzzle of data science is examined through the relationship between several key concepts in the data science realm. As we will see, far from being concrete concepts etched in stone, divergent opinions are inevitable; this is but another opinion to consider.

Data mining, as a sister term of machine learning, is also critical to data science. Before the explosion of the term data science, in fact, data mining enjoyed much greater success as a Google search term. Having a look at Google Trends stretching back a further 5 years than those shown in the above graphic, data mining was once much more popular. Today, however, data mining seems to be split as a concept between machine learning and data science itself. If one was to endorse the above explanation, that data mining is a process, then it makes sense to view data science as both a superset of data mining as well as a successor term. 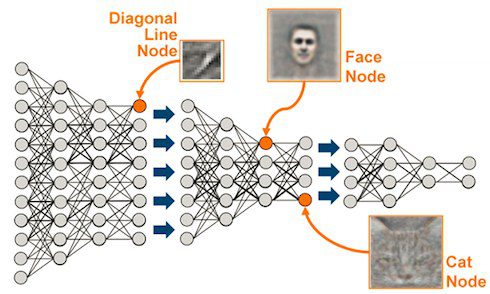 Deep learning has racked up an impressive collection of accomplishments of late. In light of this, it's important to keep a few things in mind, at least in my opinion:

Deep learning can provide an awful lot to data science in the form of additional processes and tools to help solve problems, and when observed in that light, deep learning is a very valuable addition to the data science landscape.

Most people find a precise, and often times even a broad, definition of artificial intelligence difficult to put their finger on. I am not an artificial intelligence researcher, and so my answer here may wildly differ from someone who is, or may even upset folks in other fields. I have philosophized on the idea of AI a lot over the years, and I have come to the conclusion that artificial intelligence, at least the concept of it which we generally think of when we do think of it, does not actually exist.

In my opinion, AI is a yardstick, a moving target, an unattainable goal. Whenever we get on a path toward AI achievements, somehow these accomplishments seem to morph into being referred to as something else.

I once read something like the following: If you asked an AI researcher in the 1960s what their idea of AI was, they would probably agree that a small device that fit in our pockets, which could help anticipate our next moves and desires, and had the entirety of human knowledge readily available at will, there would probably be consensus that said device was true AI. But we all carry smartphones today, a very few of us would refer to them as artificial intelligence.

Where does AI fit into data science? Well, as I have stated that I don't believe that AI is really anything tangible, I guess it's hard to say that it fits in anywhere. But there are a number of areas related to data science and machine learning where AI has provided motivation, which at times is just as valuable as the tangible; computer vision certainly comes to mind, as does contemporary deep learning research, which have both benefited from the Artificial Intelligence Ethos at some point, if not indefinitely.

AI may well be the research and development apparatus with the deepest pockets which never actually produces anything in its namesake industry. While I would say that drawing a straight line from AI to data science may not be the best way to view the relationship between the 2, many of the intermediary steps between the 2 entities have been developed and refined by AI in some form. 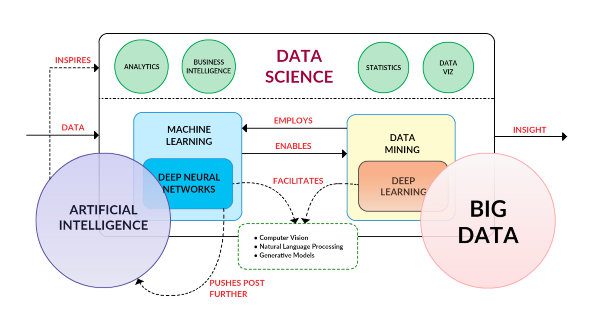 So, after discussing these related concepts and their place within data science, what exactly is data science? To me, this is the toughest concept of the lot to attempt to define precisely. Data science is a multifaceted discipline, which encompasses machine learning and other analytic processes, statistics and related branches of mathematics, increasingly borrows from high performance scientific computing, all in order to ultimately extract insight from data and use this new-found information to tell stories. These stories are often accompanied by pictures (we call them visualizations), and are aimed at industry, research, or even just at ourselves, with the purpose of gleaning some new idea from The Data.

Data science employs all sorts of different tools from a variety of related areas (see everything you've read above here). Data science is both synonymous with data mining, as well as a superset of concepts which includes data mining.

Data science yields all sorts of different outcomes, but they all share the common aspect of insight. Data science is all of this and more, and to you it may be something else completely... and we haven't even covered acquiring, cleaning, wrangling, and pre-processing data yet! And by the way, what even is data? And is it always big?

I think my idea of the data science puzzle, at least, the version of it which can be represented by the above diagram, jives well with Piatetsky-Shapiro's Venn diagram at the top of this post. I would also suggest that it is also mostly in agreement with with Drew Conway's data science Venn diagram, though I would add one caveat: I believe his very well-reasoned and useful graphic is actually referring to data scientists, as opposed to data science. This may be splitting hairs, but I don't think the { field | discipline | concept } of data science, itself, encompasses hacking skills; I believe this is a skill that scientists possess in order to allow the to do data science. Admittedly, this may be quibbling over semantics, but it makes sense in my mind.

Of course, this is not a full picture of the landscape, which is constantly evolving. For example, I recall reading, not very long ago, that data mining was a sub-field of business intelligence! Even with differences in opinions, I really can't imagine this being a valid idea today (it was difficult to accept a few years ago, to be honest).

And there you have it: some of your favorite terms bent out of shape in new ways you won't forgive me for. If you're furious right now and can't wait to tell me how wrong I am, remember the point of this post: you have just read one man's opinion. In that spirit, feel free to sound off in the comments with your (potentially heated and sharply) contrasting views. Otherwise, I hope that this has either exposed new readers to the puzzle which is data science or forced them to look at their own version of this puzzle in their heads.