Whether Evolution or Revolution, The Internet of Things is Here to Stay

The Internet of Things (IoT) is the next boom you need to know about, and insurance provider AIG has recently released a no-nonsense whitepaper providing an overview of the landscape in the space.

A mere decade ago, there were 500 million devices connected to the internet, whereas today there are between 10 and 20 billion. By 2020, there will be between 40 and 50 billion. Perhaps surprisingly, the majority of these connected devices are not what one would traditionally think of as “computers.” The Internet of Things (IoT) is upon us. 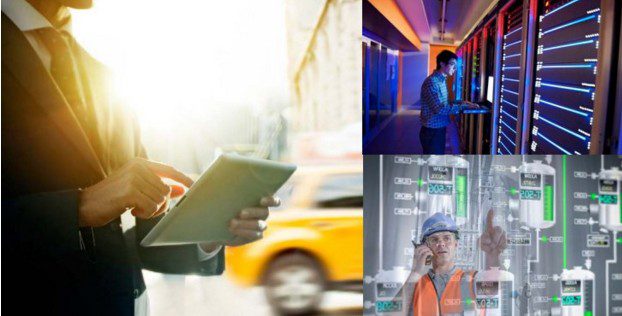 The IoT is, simply put, “the online digitization of our physical world.” The two main enabling factors of the IoT are the ubiquity of the wirelessly connected mobile device, and the mass proliferation of sensors on many of these devices. Not only are people carrying more devices than ever, but these devices are increasingly environmentally-aware, thanks to the prevalence of inexpensive sensors which collect enormous amounts of data without any need for human intervention. Today the smartphone has become the main enabler of these driving factors; however, reliable cloud storage and Big Data analytics have also played supporting roles in the arrival of the IoT era.

Is a new Industrial Revolution in the making? Semantics and hyperbole aside, the IoT presents an enormous opportunity for business. It can be argued that the IoT is one of the main components, alongside other emerging technologies such as Big Data and nanotechnology, of an oncoming era which will provide opportunities for improved efficiency, productivity, and safety in all aspects of life. Harnessing these technologies for business is not just possible; successful organizations will use them as linchpins of a successful corporate strategy as this era sets upon us. Companies that do not take advantage will be left behind by more insightful organizations. The IoT is not a fad; ask yourself how many organizations which ignored the internet are still thriving today. 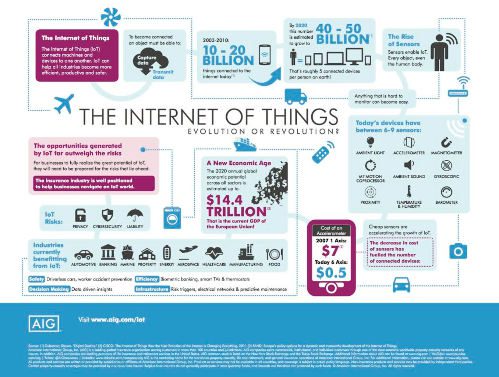 But with such opportunity comes unpredictability. Even those organizations which had the foresight to boldly ride the wave at the fore of the internet revolution had to mitigate such risk. There will, no doubt, be questions of data security and liability, for starters. The insurance industry has been at the center of analyzing such risk and liability for years. Insurance companies, like AIG, will have a major role to play in the IoT era.

AIG has recently released a whitepaper on IoT, entitled ”The Internet of Things: Evolution or Revolution?,” the first in a series, which aims to help cut through the mystery surrounding the technology. In addition to providing insight into its inevitable effects on a wide array of industries, such as automotive, manufacturing, and healthcare, the whitepaper also covers the main risks associated with the IoT, namely cybersecurity, privacy, and liability.

If you have questions about IoT, from its origins, to its applications in business, and on to the risks associated with its inevitable arrival, download AIG’s whitepaper here. It is a quality treatment of the topic, including a no-nonsense overview of the associated risks. The IoT is coming and bringing dramatic changes along with it. Don’t miss out on the evolution. Or the revolution.

This article is the product of a partnership between KDnuggets and member companies of American International Group, Inc. Although this post is sponsored, the information and opinions expressed in the article constitute only KDnuggets’ own beliefs.

I partnered with the brand to write this article but every word is mine.

KDnuggets Home » News » 2016 » Mar » Opinions, Interviews, Reports » Whether Evolution or Revolution, The Internet of Things is Here to Stay