The “Thinking” Part of “Thinking Like A Data Scientist”

People have a tendency to blindly trust claims from any source that they deem credible, whether or not it conflicts with their own experiences or common sense. Basic stats - common sense = dangerous conclusions viewed as fact.

Imagine my surprise when reading the March 28, 2016 issue of BusinessWeek and stumbling across the article titled “Lies, Damned Lies, and More Statistics.”

In the article, BusinessWeek warned readers to beware of “p-hacking” which is the statistical practice of tweaking data in ways that generate low p-values but actually undermine the test (see p-value definition below). One of the results of “p-hacking” is that absurd results can be made to pass the p-value test, and important findings can be overlooked. For example...

A study from the Pennington Biomedical Research Center in Baton Rouge [1] followed 17,000 Canadians over 12 years and found that those who sat for most of the day were 54% more likely to die of heart attacks that those that didn’t.

54%!? Yikes, that’s a scary fact. Proof that sitting kills you by heart attack. As a person who spends a lot of time sitting behind a desk, or on an airplane, or at sporting events, this “54% more likely to die of heart attacks” fact is very concerning.  Can I cheat certain death by throwing out my current desk and buying one of those expensive “stand up” work desks? Sounds like a bargain.

But the BusinessWeek article concludes with the statement “... hold findings to a higher standard if they conflict with common sense.” Bottom-line: think!

Unfortunately, people have a tendency to blindly trust a claim from any source that they deem credible, even if it completely conflicts with their own experiences, or common sense.

But I started to think, and challenge the assumption that there is some sort of causality between sitting and heart attacks. Some questions that immediately popped to mind included:

Let’s use this to remind ourselves to think before jumping to conclusion. And this is a great opportunity to employ our “thinking like a data scientist" techniques to identify what other variables might contribute to this “54% more likely to die of heart attacks” observation. In particular, this is an opportunity to test the “By Analysis” to explore what other variables we might want to consider. To perform the “By Analysis,” let’s craft the statement against which we want to apply this technique:

I want understand details on each of the study’s participants by...

Here are some of the variables and metrics that we could test to see if they might be predictors of heart attacks:

Upon further analysis, we start to see groupings of related variables and metrics around specific use cases including:

And there are likely others that we would want to identify and test with respect to those variables and metrics ability to predict heart attacks.

The goal is to use these techniques to identify which metrics and variables are the best predictors of performance, and if you are doing that, you’re thinking like a data scientist!

If you are interested in learning more about this “Thinking Like A Data Scientist” process, join me at EMC World in Las Vegas (that should set off your stress alerts), on Monday, May 2, 12:00 PM – 1:00 PM. I promise not to stress you out! 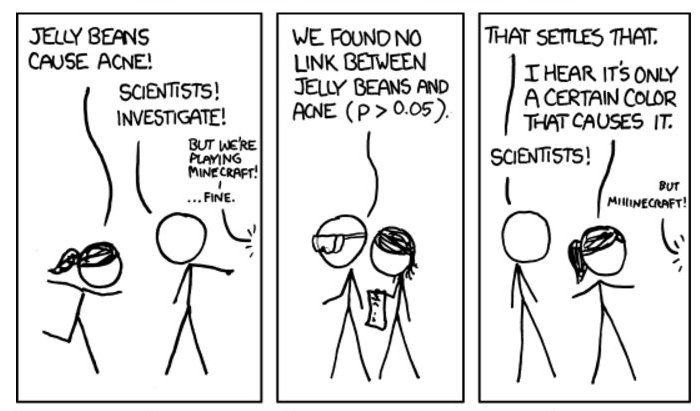 A hypothesis test is a statistical test to determine whether there is enough evidence in a sample of data to infer that a certain condition is true for the entire population. For example, the hypothesis to test is whether test group A had better cancer recovery results than test group B due to medication X. A hypothesis test examines two opposing hypotheses about a population: the null hypothesis and the alternative hypothesis.

The alternative hypothesis (that there exists an effect or a difference between the test groups) is the hypothesis you want to be able to conclude is true.

A common misconception is that statistical hypothesis tests are designed to select the more likely of two hypotheses. Instead, a hypothesis test only tests whether to reject the null hypothesis.

Confusing? Yea, that’s what I think as well.

The Minitab Blog was a great source for much of the above data (http://blog.minitab.com)

Bio: William (Bill) Schmarzo, the "Dean of Big Data," is the CTO of EIM Service Line at EMC. An avid blogger, Bill speaks frequently on the use and application of big data and advanced analytics to drive an organization’s key business initiatives.