This post will provide a quick overview the current state of Data Scientist salaries in the US, and performs some data analysis in concert with some additional data.

This post will provide a quick overview the current state of Data Scientist salaries in the US.

Among its career research resources, PayScale provides salary data for Data Scientists in 15 cities. It reports the median salary to be $93,146, all skills, companies and locations considered. We can drill down to find median salaries by location; we will disregard comparisons of skills or companies herein.

We would all likely agree that the term Data Scientist has become a catch-all for professionals possessing a subset of a common body of related skills. However, let's take a look at what PayScale regards as a Data Scientist, so that we're all on the same page:

IT data scientists are responsible for mining complex data and providing systems-related advice for their organization. They design new ways to incorporate vast information with a focus on information technology topics. They work with teams of other IT professionals to manage statistical data and create different models based on the needs of their company. They possess advanced analytical skills, in addition to their exceptional oral and written communication abilities. They process research information for easier consumption and transform it into actionable plans. They also provide value to their businesses through their findings and thoughtful insights. 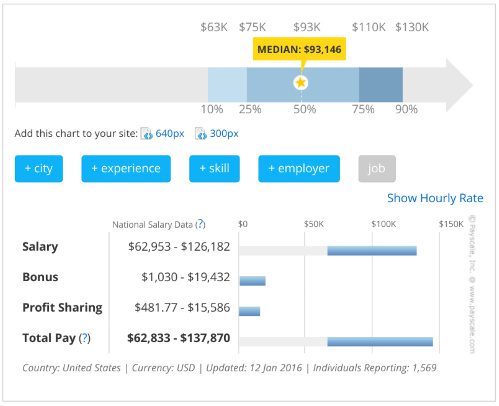 PayScale's select city data does not give us a whole lot to work with, but let's take a closer look anyhow. First we'll map the median salary data for the 15 cities in order to visualize it geographically.

The samples are taken from what we would likely consider a number of the top destinations of "technology" workers in the nation. Below are the median salaries visualized by city.

Of course, this data alone does not tell a full story. $100,000 in Palo Alto is a lot different than $100,000 is Cleveland; for example, the median home value in Palo Alto is currently $2,539,500, while Cleveland's current median home value is $49,400, according to real estate website Zillow. This is a poignant example of the disparities in required finances between major cities in the United States.

Figure 4 plots the actual salary along the Y-axis against the Cost of Living (COL) Index on the X-axis, with bubble size providing us with a COL-adjusted salary, which should give us a better understanding of what the salaries in these cities are actually worth, and how they stack up against each other.

The COL uses New York City as the baseline, with its index set at 100. We could have chosen any city in our group to act as the baseline, but any choice would have been arbitrary. Using NYC is also arbitrary, but it is the widely-accepted arbitrary in this case.

Note that cities are color-coded by region (East, West, South, and Midwest). Also note that individual COL indexes were not available for Palo Alto and Mountain View, and so the decision was made to use San Francisco's COL index for both (again, arbitrary, but something needed to be done).

Even if the same income would be worth more in Cleveland than in Palo Alto, it makes no difference if a job with said salary cannot be attained. So let's have a look at the number of job postings on Indeed which include (at the time of writing) the term "Data Scientist" (quotes included) for each of the 15 cities. Figure 5 plots the number of search returns against the adjusted salary.

It should be intuitive that the cluster of cities in the upper right portion of the scatter would provide Data Scientist job-seekers with the best chance of securing a position with a relatively high-value salary, after COL adjustments. However, this does not take into account numerous other factors, notably job competition.

This is a very elementary look at Data Scientist salaries in a number of cities across the United States. While we can draw no conclusions based on our small sample size and limited number of factors, we can note some interesting gleaned information, such as the fact that Data Scientists in Cleveland would likely afford a high standard of living with the comparatively low salary, but landing a job there may be difficult with only 7 job listings.

Ultimately, where we choose to live and work is not a completely data-driven decision. Having some data in hand while contemplating such a decision is definitely wise, however, and not doing so would be unthinkable for a Data Scientist. Perhaps next time we will take a data-driven look at the best employers for Data Scientists.