How to Quantize Neural Networks with TensorFlow

I’m pleased to say that we’ve been able to release a first version of TensorFlow’s quantized eight bit support. I was pushing hard to get it in before the Embedded Vision Summit, because it’s especially important for low-power and mobile devices, so it’s exciting to get it out there. All this documentation will be appearing on the main TensorFlow site also, but since I’ve talked so much about why eight-bit is important here, I wanted to give an overview of what we’ve released in this post too.

When modern neural networks were being developed, the biggest challenge was getting them to work at all! That meant that accuracy and speed during training were the top priorities. Using floating point arithmetic was the easiest way to preserve accuracy, and GPUs were well-equipped to accelerate those calculations, so it’s natural that not much attention was paid to other numerical formats.

These days, we actually have a lot of models being being deployed in commercial applications. The computation demands of training grow with the number of researchers, but the cycles needed for inference expand in proportion to users. That means pure inference efficiency has become a burning issue for a lot of teams.

That is where quantization comes in. It’s an umbrella term that covers a lot of different techniques to store numbers and perform calculations on them in more compact formats than 32-bit floating point. I am going to focus on eight-bit fixed point, for reasons I’ll go into more detail on later.

Why does Quantization Work?

Training neural networks is done by applying many tiny nudges to the weights, and these small increments typically need floating point precision to work (though there are research efforts to use quantized representations here too).

Taking a pre-trained model and running inference is very different. One of the magical qualities of deep networks is that they tend to cope very well with high levels of noise in their inputs. If you think about recognizing an object in a photo you’ve just taken, the network has to ignore all the CCD noise, lighting changes, and other non-essential differences between it and the training examples it’s seen before, and focus on the important similarities instead. This ability means that they seem to treat low-precision calculations as just another source of noise, and still produce accurate results even with numerical formats that hold less information.

Neural network models can take up a lot of space on disk, with the original AlexNet being over 200 MB in float format for example. Almost all of that size is taken up with the weights for the neural connections, since there are often many millions of these in a single model. Because they’re all slightly different floating point numbers, simple compression formats like zip don’t compress them well. They are arranged in large layers though, and within each layer the weights tend to be normally distributed within a certain range, for example -3.0 to 6.0.

The simplest motivation for quantization is to shrink file sizes by storing the min and max for each layer, and then compressing each float value to an eight-bit integer representing the closest real number in a linear set of 256 within the range. For example with the -3.0 to 6.0 range, a 0 byte would represent -3.0, a 255 would stand for 6.0, and 128 would represent about 1.5. I’ll go into the exact calculations later, since there’s some subtleties, but this means you can get the benefit of a file on disk that’s shrunk by 75%, and then convert back to float after loading so that your existing floating-point code can work without any changes.

Another reason to quantize is to reduce the computational resources you need to do the inference calculations, by running them entirely with eight-bit inputs and outputs. This is a lot more difficult since it requires changes everywhere you do calculations, but offers a lot of potential rewards. Fetching eight-bit values only requires 25% of the memory bandwidth of floats, so you’ll make much better use of caches and avoid bottlenecking on RAM access. You can also typically use SIMD operations that do many more operations per clock cycle. In some case you’ll have a DSP chip available that can accelerate eight-bit calculations too, which can offer a lot of advantages.

Moving calculations over to eight bit will help you run your models faster, and use less power (which is especially important on mobile devices). It also opens the door to a lot of embedded systems that can’t run floating point code efficiently, so it can enable a lot of applications in the IoT world.

Why Not Train in Lower Precision Directly?

There have been some experiments training at lower bit depths, but the results seem to indicate that you need higher than eight bit to handle the back propagation and gradients. That makes implementing the training more complicated, and so starting with inference made sense. We also already have a lot of float models already that we use and know well, so being able to convert them directly is very convenient.

How Can You Quantize Your Models?

TensorFlow has production-grade support for eight-bit calculations built it. It also has a process for converting many models trained in floating-point over to equivalent graphs using quantized calculations for inference. For example, here’s how you can translate the latest GoogLeNet model into a version that uses eight-bit computations:

This will produce a new model that runs the same operations as the original, but with eight bit calculations internally, and all weights quantized as well. If you look at the file size, you’ll see it’s about a quarter of the original (23MB versus 91MB). You can still run this model using exactly the same inputs and outputs though, and you should get equivalent results. Here’s an example:

You’ll see that this runs the newly-quantized graph, and outputs a very similar answer to the original.

You can run the same process on your own models saved out as GraphDefs, with the input and output names adapted to those your network requires. I recommend that you run them through the freeze_graph script first, to convert checkpoints into constants stored in the file.

How Does the Quantization Process Work?

We’ve implemented quantization by writing equivalent eight-bit versions of operations that are commonly used during inference. These include convolution, matrix multiplication, activation functions, pooling operations and concatenation. The conversion script first replaces all the individual ops it knows about with quantized equivalents. These are small sub-graphs that have conversion functions before and after to move the data between float and eight-bit. Below is an example of what they look like. First here’s the original Relu operation, with float inputs and outputs:

Then, this is the equivalent converted subgraph, still with float inputs and outputs, but with internal conversions so the calculations are done in eight bit. 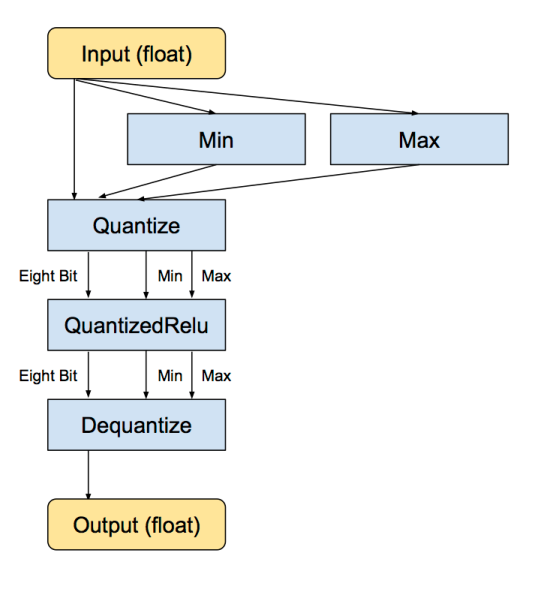