How to Quantize Neural Networks with TensorFlow


The min and max operations actually look at the values in the input float tensor, and then feeds them into the Dequantize operation that converts the tensor into eight-bits. There’s more details on how the quantized representation works later on.

Once the individual operations have been converted, the next stage is to remove unnecessary conversions to and from float. If there are consecutive sequences of operations that all have float equivalents, then there will be a lot of adjacent Dequantize/Quantize ops. This stage spots that pattern, recognizes that they cancel each other out, and removes them, like this: 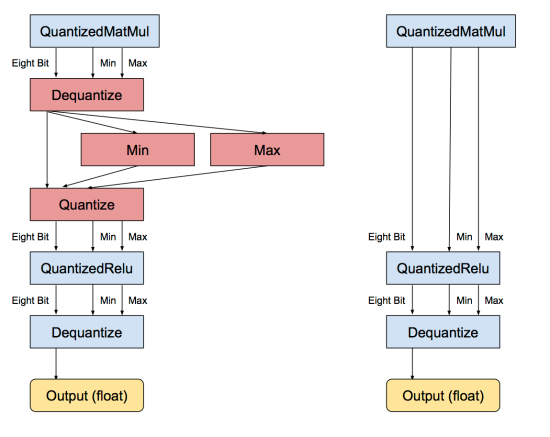 Applied on a large scale to models where all of the operations have quantized equivalents, this gives a graph where all of the tensor calculations are done in eight bit, without having to convert to float.

What Representation is Used for Quantized Tensors?

We approach converting floating-point arrays of numbers into eight-bit representations as a compression problem. We know that the weights and activation tensors in trained neural network models tend to have values that are distributed across comparatively small ranges (for example you might have -15 to +15 for weights, -500 to 1000 for activations on an image model, though the exact numbers will vary). We also know from experiment that neural nets tend to be very robust in the face of noise, and so the noise-like error produced by quantizing down to a small set of values will not hurt the precision of the overall results very much. We also want to pick a representation that’s easy to perform calculations on, especially the large matrix multiplications that form the bulk of the work that’s needed to run a model.

The advantages of this format are that it can represent arbitrary magnitudes of ranges, they don’t have to be symmetrical, it can represent signed and unsigned values, and the linear spread makes doing multiplications straightforward. There are alternatives like Song Han’s code books that can use lower bit depths by non-linearly distributing the float values across the representation, but these tend to be more expensive to calculate on.

The advantage of having a strong and clear definition of the quantized format is that it’s always possible to convert back and forth from float for operations that aren’t quantization-ready, or to inspect the tensors for debugging purposes. One implementation detail in TensorFlow that we’re hoping to improve in the future is that the minimum and maximum float values need to be passed as separate tensors to the one holding the quantized values, so graphs can get a bit dense!

How do we Determine Ranges?

The nice thing about the minimum and maximum ranges is that they can often be pre-calculated. Weight parameters are constants known at load time, so their ranges can also be stored as constants. We often know the ranges for inputs (for examples images are usually RGB values in the range 0.0 to 255.0), and many activation functions have known ranges too. This can avoid having to analyze the outputs of an operation to determine the range, which we need to do for math ops like convolution or matrix multiplication which produce 32-bit accumulated results from 8-bit inputs.

If you’re doing any kind of arithmetic on 8-bit inputs, you’ll naturally start to accumulate results that have more than 8 bits of precision. If you add two 8 bit values, the result needs 9 bits. If you multiply two 8 bit numbers, you get 16 bits in the output. If you total up a series of 8-bit multiplications, like we do for matrix multiplication, the results grow beyond 16 bits, with the accumulator typically needing at least 20 to 25 bits, depending on how long the dot products involved are.

This can be an issue for our quantization approach, since we need to take an output that’s much wider than 8 bits and shrink it down to feed into the next operation. One way to do it for matrix multiplies would be to calculate the largest and smallest possible output values, assuming all of the input values were at extremes. This is safe, since we know mathematically that no results can fall outside this range, but in practice most weights and activation values are much more evenly distributed. This means that the actual range of values we see is much smaller than the theoretical one, so if we used the larger bounds we’d be wasting a lot of our 8 bits on numbers that never appeared. Instead, we use the QuantizeDownAndShrinkRange operator to take a 32-bit accumulated tensor, analyze it to understand the actual ranges used, and rescale so that the 8-bit output tensor uses that range effectively. There are strategies that involve observing the actual minimums and maximums encountered with large sets of training data, and hard-coding those to avoid analyzing the buffer for ranges every time, but we don’t currently include that optimization.

How is the Rounding Done?

One of the hardest and most subtle problems we hit during quantization was the accumulation of biases. As I mentioned above, neural networks are very resilient to noise, but unless you’re very careful with rounding it’s easy to introduce biases in a single direction that build up during computation and wreck the final accuracy. You can see the final formula in the code, but the important part was that we needed to subtract the rounded version of the minimum from the rounded version of the float input value, rather than subtracting float minimum from the input and then rounding.

We’ve found that we can get extremely good performance on mobile and embedded devices by using eight-bit arithmetic rather than floating-point. You can see the framework we use to optimize matrix multiplications at gemmlowp. We still need to apply all the lessons we’ve learned to the TensorFlow ops to get maximum performance on mobile, but we’re actively working on that. Right now, this quantized implementation is a reasonably fast and accurate reference implementation that we’re hoping will enable wider support for our eight-bit models on a wider variety of devices.

If you’re interested, I highly recommend digging through the quantization code in TensorFlow, especially looking at the kernels that implement quantized ops. These all include reference implementations that we’re hoping will help portability to new hardware devices.

We also hope that this demonstration will encourage the community to explore what’s possible with low-precision neural networks. Thanks to everyone who helped put the quantization support together, it’s been great getting this out there!

Bio: Pete Warden is Engineer, CTO of Jetpac Inc, author of The Public Data Handbook and The Big Data Glossary for O’Reilly, builder of OpenHeatMap and the Data Science Toolkit , and other open source projects.