By Gregory Piatetsky, KDnuggets on June 14, 2016 in Big Data, Big Data Software, Data Mining Software, Deep Learning, Poll, Python, R
For each tool, we compute the R% and Py% - % of time this tool is used along with R or Python. We define R/Python bias as the ratio of R%/Py% for this tool, divided by global ratio of R/Python = 1.071.

Fig 3 shows R/Python bias for top tools (with >150 votes). To make the patterns easier to see we chart log2(R_Py_bias). 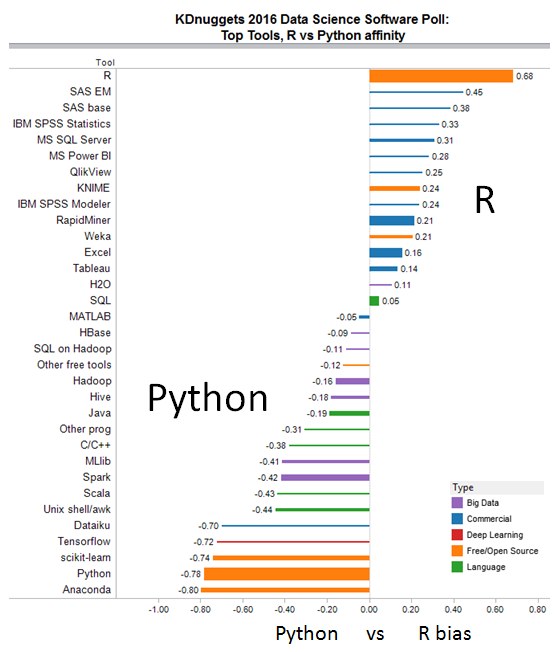 We note that the tools with R bias are mainly blue (commercial), except for KNIME and Weka, while tools with Python bias are Free/Open Source (orange), Languages (green) and Big Data (purple).

Anaconda and scikit-learn, which are based on Python, have the largest Python bias, while SAS, SQL Server, IBM SPSS Statistics, KNIME, and RapidMiner have R bias. 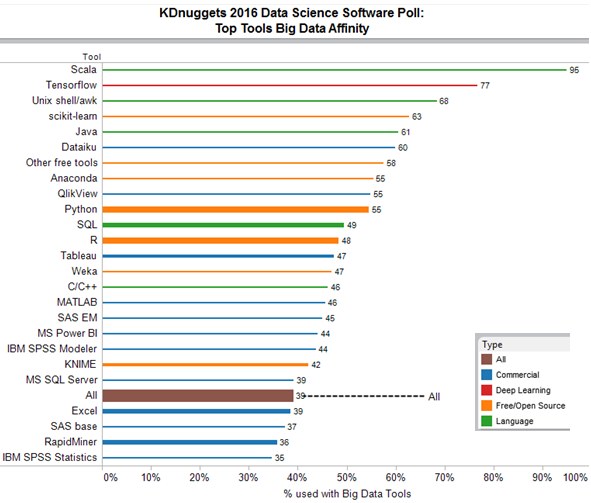 We note that Scala has an amazing 95% correlation with Big Data. Most of the tools with high Big Data affinity are languages or free tools, It is expected that Tensorflow is used frequently Big Data (it has 77% affinity), but we also note that 23% of Tensorflow users are still in learning phase, and have not used any Big Data tools.

Next, we compute Deep Learning affinity among top tools using a similar approach.