Interesting Things I Learned at SciPy 2016

Learn about some interesting projects featured at SciPy 2016, brought to you by an attendee who put in the work to bring you this great list of projects.

Editor's note: This post was written during SciPy 2016, and so rest assured that the author is currently no longer in attendance, as the tone and language may suggest.

Jupyter dashbord - Extension for Jupyter Notebook that enables the layout and presentation of dashboards from notebooks.

Jupyterlab - A computational environment. This is a very early preview, and is not suitable for general usage yet. But nice to checkout now.

altair - This is a declarative statistical visualization library for Python.

Glumpy - A python library for scientific visualization that is both fast, scalable and beautiful.

binder - Turn a GitHub repo into a collection of interactive notebooks.

dask - A flexible parallel computing library for analytics, it can 'deal with' big data even on a single machine.

simpeg - An open source python package for simulation and gradient based parameter estimation in geophysical applications.

steno3d - Visualize 3d data, but it is not free if data size over certain limit.

Intel Python distribution - It is said to boost the performance of the packages.

HPX-5 - A distributed programming model allowing programs to run unmodified on systems from a single SMP to large clusters and supercomputers with thousands of nodes.

loopy - A code generator for array-based code in the OpenCL/CUDA execution model.

sharedmem - A different flavor of multiprocessing in Python.

nbflow - A tool that supports one-button reproducible workflows with the Jupyter Notebook and Scons.

auto-sklearn - An automated machine learning toolkit and a drop-in replacement for a scikit-learn estimator.

scikit-optimize - A simple and efficient library for model-based optimization, accessible to everybody and reusable in various contexts.

nbdime - Tools for diffing and merging of Jupyter notebooks. 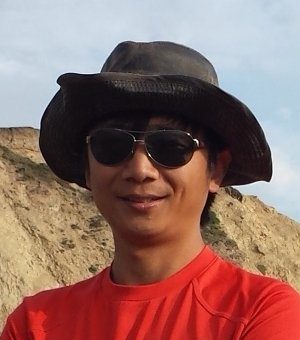 Bio: Qingkai Kong is a PhD candidate at Berkeley Seismological Laboratory, he is interested in data science and earthquakes!