Neural Designer provides an integrated environment for predictive analytics. The software specializes in neural networks, which is considered one of the most advanced techniques for predictive modelling.

Neural Designer solves approximation, classification, forecasting and association applications. It does not deal with computer vision or natural language processing.

The user interface guides the user through a sequence of well-defined steps, in order to simplify data entry as well as the execution of the different tasks. There is no need for programming or building block diagrams.

The results are written in a comprehensive report containing interactive descriptions, tables and graphs. The objective is that the user is able to understand and interpret each step in the modeling process. 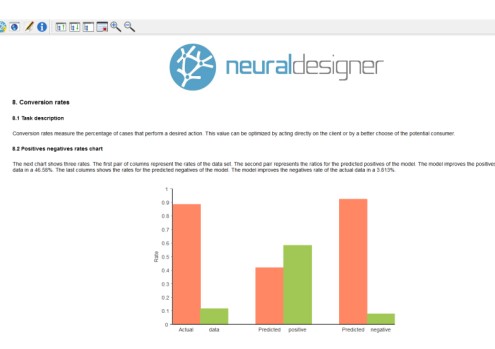 Advanced algorithms for data pre-processing, such as cleaning outliers or calculating principal components, are included.

The software implements neural network architectures with an arbitrary number of nonlinear layers, in order to build the most powerful predictive models.

It also includes different error and regularization methods so that the user can achieve the best results for a given data set.

Sophisticated training strategies, such as the quasi-Newton method or the Levenberg-Marquardt algorithm, have been developed for more accurate computations.

One of the main advantages of Neural Designer is the inclusion of an advanced model selection framework, which allows the user to obtain the most relevant variables in a given process.

The tool also contains many different methods for testing exhaustively the generalization capabilities of a predictive model, depending on the application at hand.

Finally, the resulting neural network can be operated within the program in different ways, or exported to any programming language, such as R or Python, using its mathematical expression.

Neural Designer offers excellent performance. It is developed in C++ for better memory management and higher processing speed, and implements CPU parallelization by means of OpenMP and GPU acceleration with CUDA.

The software installs onto a Windows, Mac OS X, and Linux operating systems.