This analysis uses Twitter data to perform a sentiment analysis to help determine how people truly feel about Trump. We found that while his fans have supported him throughout his entire campaign, more and more Twitter users have started to grow tired of Trump’s attitude.


The rest of these words, though, are pretty much useless in telling us how people feel about Trump. They either recount the events or cannot be analyzed.

The verbs, however, are actually much more interesting in this case. “Love”, in fact, obtained a higher frequency than “hate” (1236 to 1011). Trump supporters, therefore, seem busy combating the negativity being pushed towards him. But, they are relatively close, so it is hard to say whether it is significant or not.

Regarding the pie chart, while the surprise did go up from the last event, it still did not top the initial announcement of his campaign, meaning people might be slowly getting used to Trump’s unpredictability. 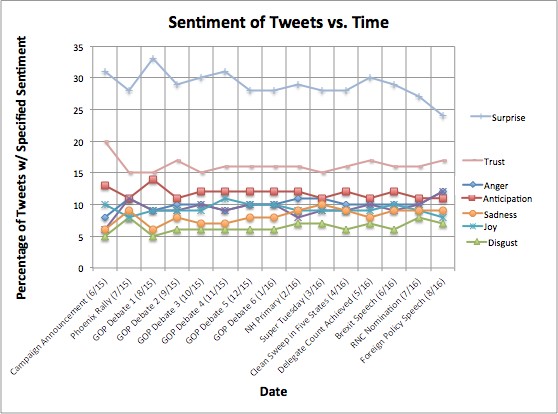 When I first started this project, I had a few hypotheses about what the data would look like. First of all, I expected less #trumptrain advocates. Following Trump’s crazy media coverage, I expected people to be constantly surprised and anxious after all his antics.

The graph, however, shows slightly different story. Trump’s supporters, though, have really stood their ground. During the entire 14 months of observation, the trust percentage has managed to keep spot number two and stay constant at more than 15%. With all the negativity Trump has been receiving as seen in the three events above, they have continued to trust him and promote his campaign.

Moving on to the other sentiment in question, surprise, while still in first, has decreased over time. It looks like a Trump comment that would have been extremely offensive a year ago may seem almost normal now. But is this a result of apathy or habituation? Since people have still remained at around the same level of anticipation, people may be just accustomed to Trump’s dauntlessness.

In the analyses of specific events above, we observe that the number of tweets about Trump has increased over the past year, so while people have become less surprised, he has been talked about more and more by both the media and Twitter users around the world. From my observations, however, a good portion of these tweets is sarcastic references to this heated election. Twitter houses many comedians looking for likes and retweets, and what better way to poke fun at someone than adding America’s phenomenon into the mix. Since netizens love satire and sardonicism, jokes poking fun at the tiring presidential fiasco have appeal and popularity. So, while the declining surprise factor may just be a result of familiarization, it may be because people are getting tired of Trump. 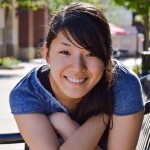 Bio: Yunyang Wang is currently a high school senior at Dublin Jerome HS in Dublin, OH, USA. Avid learner and big data novice. She would like to thank Professor Yan Yu for her guidance throughout this project. She would also like to thank Junyan Wang and Felix E-Nelson for their help.