We review 12 core Apache Flink concepts, to better understand what it does and how it works, including streaming engine terminology.

In this post we will learn basic concepts and description of the technology and workflow used by Apache Flink:

1. What is Apache Flink?

At first glance, the origins of Apache Flink can be traced back to June 2008 as a researching project of the Database Systems and Information Management (DIMA) Group at the Technische Universität (TU) Berlin in Germany.

Apache Flink is an open source platform for distributed stream and batch data processing, initially it was designed as an alternative to MapReduce and the Hadoop Distributed File System (HFDS) in Hadoop origins.

According to the Apache Flink project, it is

What does Flink offer?

Batch and Streaming in One System

What are Flink’s components? 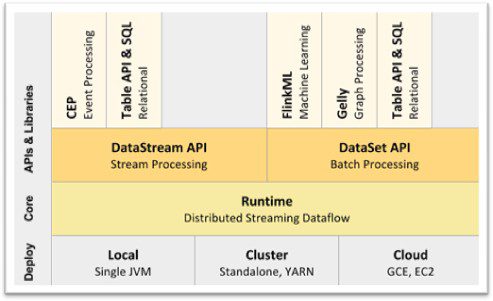 Apache Flink can execute programs in a diversity of context, such as standalone, or embedded in other programs. The execution could be in a local Java Virtual Machine JVM or in different clusters with many nodes.

The Distributed Streaming Dataflow layer receives a program like a generic parallel data flow with arbitrary tasks, which inputs and outputs are data streams. This tasks are called “JobGraph”.

4. Stream Processing/ What is stream processing?

Stream processing is a new sight of processing, the business logic is applied to every transaction that is being recorded in real-time in a system, for example E-commerce, the Internet of Things (IoT) with various sensors that emit data online, online monitoring of traffic in a city, telecom, banking, etc. In other words, stream processing applies business logic to each event that is being captured online in instead of store whole events and hence process it as a batch. The highlight of process in this way is that the analysis will show the real or online state of the data at this instance, that is in real-time with unbounded data.

Bath processing is processing a huge volume of bounded data at once. The steps need for processing are called batch jobs. Batch jobs could be stored up during working hours for example working hour and hence executed during the evening, or even during weeks or months and executed on weekend or once a month. The classic example of batch processing is how the credit card companies process billing. The client does not receive a bill for each transaction, usually a customer receives the billing each month when whole data has been collected. One example for managing it is Hadoop that provides map Reduce as a processing tool for these large scale files which can be months or years of data stored.

Data Stream is the main API that offers Apache Flink, and what makes difference with its competitors. DataStream API allows develop programs (in Java, Scala and Python) that implement transformations on datastreams (see examples in 6.1). The data streams are initially created from multiple sources such as message queues, socket streams or files. The results of the data streams return via Data Sinks, which allow write the data to distributed files or for example command line terminal.

6.1  Examples of transformations in Flink: