By Gregory Piatetsky, KDnuggets on October 20, 2016 in About KDnuggets, LinkedIn, LinkedIn Groups

comments
Soon after my 2015 post about LinkedIn Groups Top LinkedIn Groups for Analytics, Big Data, Data Mining, and Data Science - Discussions up, Engagement down, LinkedIn - who certainly saw the same trends of declining engagement - has removed the full group statistics from public view.

So what is happening to LinkedIn Groups? How fast are they growing?

What is the rate of conversations. comments, and likes (introduced in 2015)?

Where do groups fall in the quadrants of Active, Posting, Commenting, and Passive?

I collected the group membership on Jan 1 and Sep 30, 2016 and with the help of KDnuggets editors Prasad Pore, Matt Mayo, and Anmol Rajpurohit collected the group conversations around October 7, 2016 for 26 of the largest LinkedIn groups in Analytics, Big Data, Data Mining, and Data Science.

The 10 largest groups grew at a similar rate, except the top Big Data & Analytics group - see Fig 1, but the next 20 groups showed a lot more variety, with some groups like Data Scientists and KDnuggets growing fast, but many groups showing very slow growth or declining. 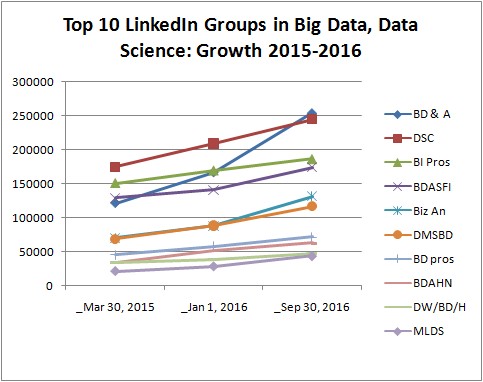 
Next, we examine the group engagement