Key themes included the polling failures in 2016 US Elections, Deep Learning, IoT, greater focus on value and ROI, and increasing adoption of predictive analytics by the "masses" of industry. 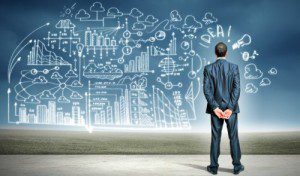 While the "Trail Blazers" (Google, Amazon, Facebook, ...) and "Early Assimilators" companies were reaping substantial benefits through wide spread institutionalization, there were this large pool of organisations ("Masses") who were at the fringes watching closely. The big trend I see emerging for 2017 and forward, is the increasing adoption of data science as a practice among the "Masses". Adoption of data science domain within these companies are relatively at a smaller scale, as Proof of Concept projects , to figure out what Data Science can do for them. Lot of these organisations are seeing early successes with their small projects and are at the cusp of institutionalizing their early gains. From the conversations we have had with many customers, come 2017 we might witness the explosion of data science as a domain within the Masses.

The large blow-up in data science (in failing to predict 2016 US presidential election) has come from the use of social media information to provide accurate facts from all of the information they share. From a company level (e.g., Facebook video metrics or their censoring tools in China) to the individuals having noisy data consumed (e.g., Reddit comments edited, or fake twitter news), it is clear that post-election there is far more scrutiny on how information can be judged to be valuable and reliable. And whether the large technology companies can be independently trusted to set differentiated rules evenly for everyone.

Predictive workforce analytics and Data Science - The future of Hiring

For decades human resource has struggled along hiring based on HR metrics and resume buzzwords like engagement and people analytics but little has been done to actually decrease turnover and attrition.

The time is now for forward thinking and with billions of HR and Workforce dollars at stake some companies have decided to take a more analytical and even predictive approach but unfortunately not enough. Using workforce metrics to solve business problems will make a stand in 2017. Those who jump on board will see almost immediate results but those that continue to follow the old HR methods, turnover will continue to plague!

Businesses have relied on Industrial and Organizational (Ind/Org) Psychologists to apply science to workplace issues. Much of this work involves creating tests, surveys, training courses, selection procedures and the like. Until recently, Ind/Org Psychology has shown a deductive, purely statistical mindset - more chi-square, less AUC. This rigor is good, and sometimes Data Science could use more of it.

We are seeing signs of change now, where some in the Ind/Org community are embracing machine learning and inductive methods of modern Data Science. This will be a fascinating fusion of mindsets, and we expect to see it begin to blossom in 2017.

Gregory Piatetsky-Shapiro, President of KDnuggets, co-founder of KDD conferences, a co-founder and past chair of ACM SIGKDD.

I see two landmark Data Science related events in 2016.
First, the convincing victory of DeepMind AlphaGo over the world-champion Go player Lee Sedol was a landmark achievement for Deep Learning and a strong indicator for the progress we are likely to see from this technology in many areas where data is plentiful.

Second, the failure of almost all polls to predict Trump victory in 2016 US election (as well as a similar failure to predict Brexit) was a reminder to the limits of Data Science and predictions when dealing with small data, human behavior, and implicit biases. I expect more Deep Learning successes in data-rich domains in 2017, and hope that Data Scientists have learned the lessons from failure to predict Trump.

2016 saw a continued expansion of the variety of graphical representations available for displaying data patterns and the results of predictive analyses. The options for displaying our findings have come a long way from the years of box plots and simple line graphs.

In 2017, the predictive analytics community may experience a backlash resulting from the missed predictions of the 2016 election. Companies and organizations who are new to the idea of predictive analytics may be more suspicious of our industry than they have previously. The magnitude, extent, and publicity around the missed election predictions may require us to work harder to prove our value to those outside the community.

The data science miss and other data science lessons learned from Trump's victory over Clinton. Nate Silver's success in predicting Obama's presidential election (including every state) over the 2008 and 2012 elections set us up for a big fall. Nate missed the election (giving Clinton a 70% chance of winning the morning of the election) and missed on 9 states. Stunning. There is tons to learn that we can apply to all industries and organizations (e.g., Analytics Half-life syndrome, Importance of constantly looking for customer and market sentiment proxies, harnessing analytic modeling paranoia).

Key Trends in 2017? The hype around the Internet of Things (IoT) will continue to grow, but organizations will only make intermittent progress in identifying where and how IoT can drive and derive business value. The fascination with the different IoT technologies and creating "connectedness" will eventually give way to a business framework that emphasizes "smart" over "connected." Eventually the conversation will boil down to this simple question: "How effective is your organization at leveraging IoT to power your business models?"

Predictive analytics continues to further its penetrating across a wide variety of verticals and horizontals, such as sales and marketing, market research, e-commerce, environmentalism, financial services, insurance, news media, healthcare, pharmaceuticals, government, human resources, travel, real estate, construction, and law. How did I derive that particular list? Those are the fields within which I've been commissioned to give talks over the last few years. Also, following market opportunities, our Predictive Analytics World event series (www.pawcon.com) has expanded its portfolio to include PAW Business, PAW Healthcare, PAW Government, PAW Manufacturing, PAW Workforce, and PAW Financial Services. The trend is unstoppable.

The key trends for 2016 were the acceptance of Machine Learning and AI are categories along with the clear win for open source languages for analytics. These technological developments have been front and center and have dominated investment and other decisions by companies this year.

The consequence of this focus on analytic technology is that a key trend for 2017 is going to be fixing the analytic value chain - moving the focus away from how "good a model can we build" to "how can we improve the business with analytics". This means investing in developing business understanding, using decision modeling for instance, and in deployment of analytic models into production systems (with all the associated organizational change).