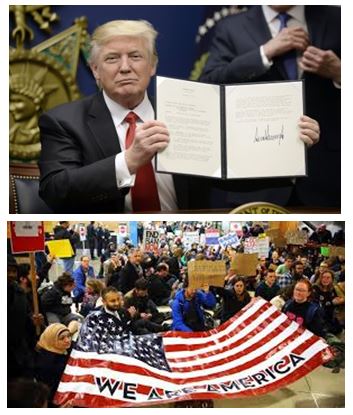 President Trump Executive Order 13769 'Protecting the Nation from Foreign Terrorist Entry into the United States' (aka 'A Muslim Ban'), called for a 90-day ban on immigrants from seven predominantly Muslim nations and a 120-day ban on all refugees.

It has been very controversial from the start, with massive protests, and was put on hold by courts.

While US public has been split about this ban (depending on how the question was asked - see more below), over 100 leading US tech companies, including Apple, Airbnb, Google, Microsoft, Netflix, Paypal, Tesla, and Uber, have filed an amicus brief opposing the president's executive order.

Your autocomplete results and order may vary, but you will probably also see "impeachment" auto-complete option. This suggests that many people already believe that Trump behavior (not only in regards to this ban) is unconstitutional and is likely to lead to impeachment.