A parody of Billy Joel's song 'We Didn't Start the Fire,' rewritten to include the accomplishments of various Big Data influencers. 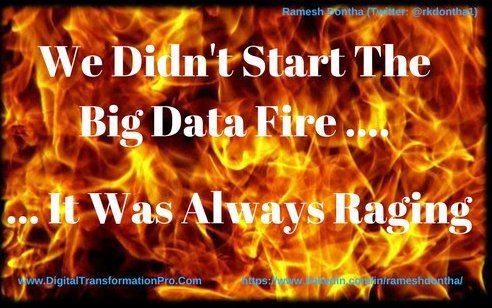 Unless you are hiding under a rock, you know that the Big Data fire is raging. Whole lot of people have contributed significantly to the advancement of Big Data over the years and quite a few are continuing to influence. I learn every day from these pioneers and influencers so I wanted to recognize my ‘guru’s and I had couple of options: 1) Write another boring article 2) Be little bit creative and write a song (and of course be ridiculed for doing so). Well, I wanted to take a chance.

One of my favorite singers is Billy Joel and one of my all time favorite songs is ‘We Didn’t Start The Fire’. Wait, did you just say, never heard of that song? I am sorry but you are not permitted to read this anymore until and unless you watch ‘We Didn’t start the fire’ on Youtube.

Here is my crude attempt to parody that great song in honor of Big Data pioneers and influencers. I relied on few sites to pick my list (sources are at the end of this article) and I am honored to say that I have interacted with a few of them personally. Challenge in coming up with a list like this is that there are lot more people that I am not aware of but are contributing significantly to big data and data science in general. Apologies in advance for not including many more but it is not intentional. Please feel free to do add your own influencers in the comments below.

The following song has links to their linkedin profiles or twitter handles or their web sites. I strongly advise you to follow them if you can. With that out of the way, shall we start? Remember, keep that tune in your head as you hum (or read) along. Let’s take it from the top, shall we?