Climate Change Denial and CO2 Emissions – What is the Connection?

We examine the connection between Climate Change Denial and CO2 emissions and find a strong correlation - countries with higher CO2 emissions/capita also have higher percentage of climate skeptics.

comments
Recent UN/Western Digital "Data For Climate Action" Challenge has once again highlighted the gulf between the world-wide scientific community, where there is an overwhelming consensus that climate change is real and the opinions of many republicans in the US (including the current US government), who think that climate change is a hoax.

See my interview with UN Global Pulse Director about the 'Data For Climate Action' Challenge, where we discussed the best sources of climate data, examples of using data for climate mitigation and climate adaptation, and resources for convincing climate change skeptics.

But what drives the climate skepticism?

There are not many people that doubt scientific theory of gravity, or Mendeleev periodic table of elements.

The public usually doubts science - most notably theory of evolution or climate change - only if the science is in conflict with other powerful interests that push alternative views.

Would countries that pollute more also have more doubters?

I decided to investigate.

I took CO2 emissions per capita numbers from 2015 European Commission data and the data on climate change denial from the 2014 Ipsos Global Trends survey on the environment.

For each country I took the percent who disagreed with the question:

We have 19 countries that appear in both lists charted below. 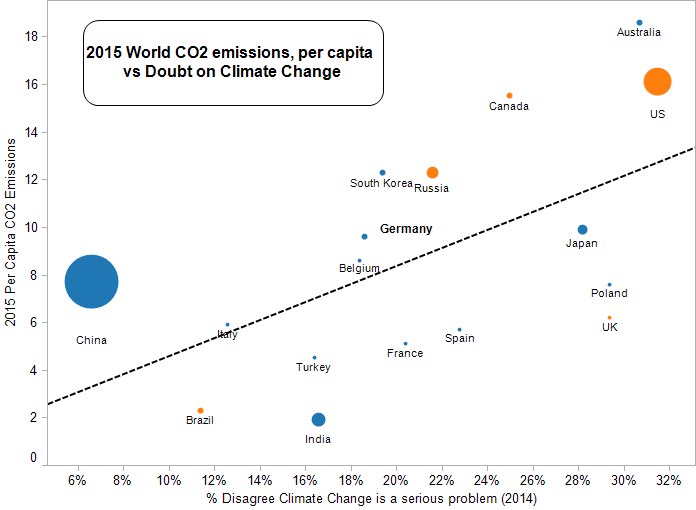 On one hand, we see a clear correlation (p=0.02) between higher CO2 emissions per capita (which roughly correspond also to GDP/capita) and percent of doubters.

On the other hand, correct understanding of the climate change is not enough without coordinated government and industry action.

China has both low percent of doubters (only 7%) and low emissions per capita, but because of its huge population, it has a very high share (29.5%) of the world total CO2 emissions. India, also with low % of doubters and low per/capita emissions, has 7% of world emissions.

US is at the other extreme, with high percent of doubters (32%), high emissions per capita, and 14% of the world total emissions.

Climate change is a complex problem and simple solutions are not enough.

Data Scientists can help by taking part in Data for Climate Action challenge to harness data science and big data from the private sector to fight climate change.

Apply and submit your proposals at DataForClimateAction.org by 10 April 2017.