During a rally in February, President Trump had these disparaging words about Sweden’s humane immigration policy... but nothing of note actually happened the previous night in Sweden.


Editor's note: This blog is the winner of Data Science vs Fake News Contest, organized by KDnuggets, Data for Democracy, and data.world. Additional entries will be published in the coming weeks.

During a rally in February, President Trump had these disparaging words about Sweden’s humane immigration policy,

"You look at what’s happening last night in Sweden. Sweden. Who would believe this? Sweden.
They took in large numbers. They’re having problems like they never thought possible."

...But nothing of note actually happened the previous night in Sweden, leading many in the twitterverse to wonder if Mr. Trump had been self medicating when Jeff Sessions was out of the room.

As the holder of the highest elected office in the land, we know that Mr. Trump is privy to best in class intelligence and should have his finger on the pulse of all major world events. Yeah... if only he went to intelligence briefings and didn’t ask for complex matters to be simplified whenever he actually attends.

It appears, however, that the President prefers to gather intel from alternative sources which sometimes lead to alternative facts. By now, the public can deduce that the validity of the statement is nowhere near as important as the narrative that President wants to push.

If you have had access to a television in recent years, you would most likely have heard the assertion that bad hombres were overrunning developed countries and bringing in bad hombre stuff with them, including crime.

While academic research has proved this to be demonstrably false, let’s look at the numbers in Sweden to see if this idea holds any weight. 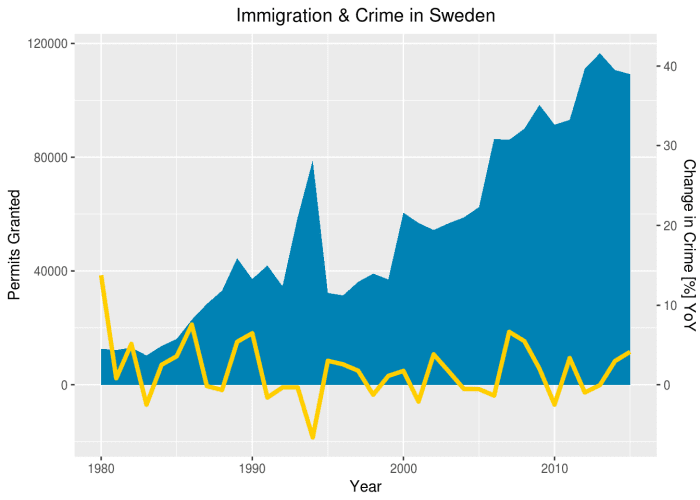 No... it doesn’t. While Sweden “took in large numbers,” the change in the crime rate, year over year, has ebbed and flowed in the same manner that it has for decades. Many factors contribute to the change in crime rates, but visually we can see that bad dudes are not a major one.

While crime is no more of a problem than it was in previous years, this perception that the “others” commit crimes at higher rates is real and harmful enough for the Swedish government to work on dispelling the notion by reiterating facts about the situation.

So, is Sweden a great country for accepting thousands of people in need? The short answer, yes. The long answer, they also will get a lot in return. The reason for this is that their population is aging, bigly. The amount of retirees as a percent of the population increased significantly over the last 50+ years, while the youth population has simultaneously declined. 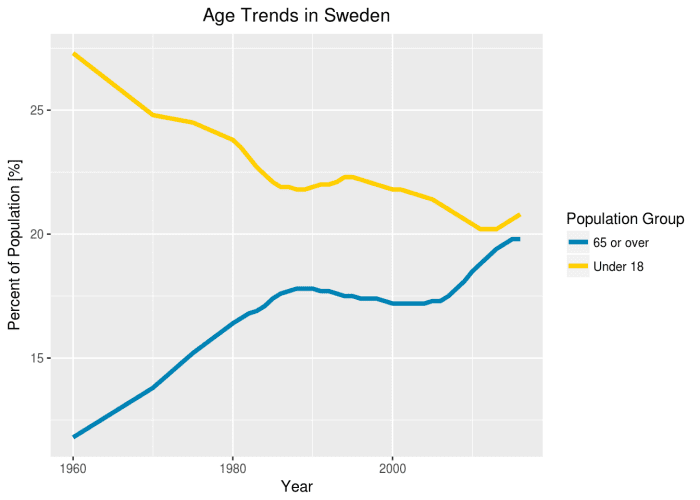 This spells trouble for their earned benefit system if actions aren’t taken to correct it. The Swedish government will need additional taxpayers to prop up their economy and support retirees for years to come. A great way to supplement the workforce is to welcome in people from other countries in search of better opportunities.

It’s safe to say that they are winning with this policy.

Bio: Jacob Igono is currently pursuing a PhD in economic theory from Charles University in Prague. His previous studies include master degrees from the Sorbonne in economics and a bachelors in finance from Arizona State University. He has worked in strategy and data science consultancy roles for startups and young companies in Europe and Africa. He is particularly interested in fintech, machine learning and applied microeconometrics. Lastly, he was a Manchester City supporter before they were good.