Statistics, though a central set of tools for data science, are often overlooked in favor of more solidly technical skills like programming. Even machine learning learning algorithms, with their reliance on mathematical concepts such as algebra and calculus -- not to mention statistics! -- are often treated at a higher level than is required to appreciate the underlying math, leading, perhaps, to "data scientists" who lack a fundamental understanding of one of the key aspects of their profession.

This post won't resolve the discrepancy between knowing and not knowing the absolute basics of statistics. However, if you are unable to fully understand the basic descriptive statistics terminology included herein, you are definitely lacking foundational knowledge that is needed to build a whole series of much more robust and useful professional concepts on top of.

So here is a collection of 15 basic descriptive statistics key terms, explained in easy to understand language. A comprehensive example follows, which includes a bit of Python code. Note that, as a basic introduction, mathematical representations and descriptions of the terms herein have been intentionally omitted.

A population is a selected individual or group representing the full set of members of a certain group of interest.

A sample is a subset drawn from a larger population. If this drawing is accomplished in such a manner that each member of the population has an equitable chance of selection, the result is referred to as a random sample.

A parameter is a value which is generated from a population. If I had all the data of all humans on Earth and generated the mean age, this value would be a parameter.

A statistic is a value which is generated from a sample. If I calculated the mean age of a subset of humans on planet Earth (much more feasible), this value would be a statistic. Hence, the discipline of statistics.

Generalizability refers tot he ability to draw conclusions about the characteristics of the population as a whole based on the results of data collected from a sample. This is ability is not a given, and depends heavily on the nature of sample collection, sample size, and various other factors.

A distribution is the arrangement of data by the values of one variable in order, from low to high. This arrangement, and its characteristics such as shape and spread, provide information about the underlying sample.

When there are more scores toward one end of the distribution than the other, this results in skew. When the scores of a distribution are more clustered at the high end, the relatively fewer number of scores on the low end result in a tail, with the scenario being referred to as negative skew. Positive skew is when a distribution shows a tail at its high end.

One of the most important measures of dispersion, the range is the difference between the maximum and minimum values of a distribution.

Variance is the statistical average of the dispersion of scores in a distribution. Variance is not often used on its own, but can be a useful calculation on the way to a more descriptive statistical measurement, such as standard deviation.

The IQR is the difference between the score delineating the 75th percentile and the 25th percentile, the third and first quartiles, respectively.

Below is a simple Python script for computing much of the descriptive statistics discussed above, followed by an example. 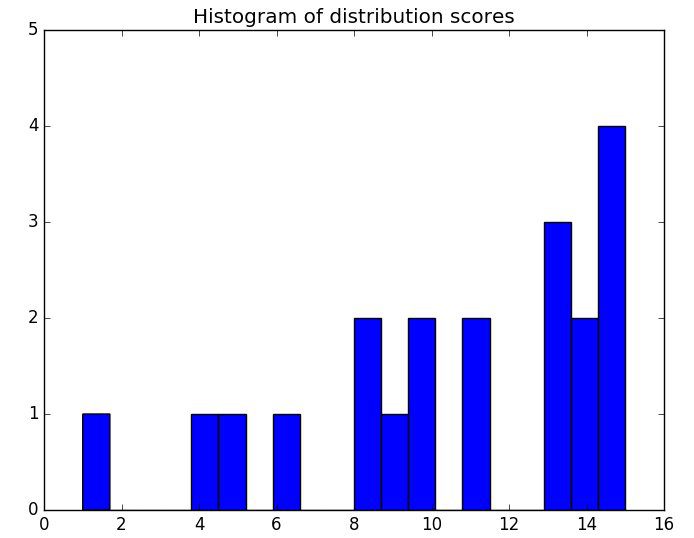