The Real “Fear” of AI is Automation Inundation

The biggest threat to minimum wage earners (and beyond, quite frankly) is the new tsunami of automation in the workplace.

You've certainly heard it: the continuous discussion related to raising the minimum wage in the various districts of numerous countries, with $15 per hour being the currently hyped target in particular areas of the United States and Canada. I am not a politician, an activist, or an economist; while I have brought this subject up for context, I am now going to bypass it directly and instead address 2 other specific, closely-related topics.

Minimum wage automation in the service industry: I'm not lovin' it.

First, in the context of the above utterance, it seems that job security for minimum wage earners is not getting enough coverage. While it is understandable that generally unskilled minimum wage earners would be interested in a guarantee of more money -- a perfectly reasonable concern -- knowing that they will have the same job to go to tomorrow, the next day, and the day after is likely nearly as important to many, at least in the longer term. I would go so far as to say, without any evidence whatsoever, that minimum wage earners would even be willing to sacrifice some percentage of their hourly earnings -- the particular percentage being open to argument -- for ironclad job security in the long term. I suspect that earning $14.50 per hour, guaranteed, for the next 5 years may be more attractive to a large swathe of workers than would $15.00 with no promise of work tomorrow. This job security would also cover the ongoing trend toward part time job position creation in contrast to full time employment positions.

And this is not to take away from arguments in favor of increased minimum wage. I'm not politicizing, nor is this an either-or situation, but I feel that this aspect of security gets overlooked in the minimum wage discussion for the most part. However, and yet again, I only bring up the point of job security to segue into my main point: the biggest threat to minimum wage earners (and beyond, quite frankly) is the new tsunami of automation in the workplace.

I'm not talking about the inevitable automation that's coming decades from now; I mean the reality that the labor force is changing dramatically as we speak, and will continue to do so at an exponential rate, becoming increasingly noticeable year over year.

If you're trying to understand AI's near-term impact, don't think "sentience." Instead think "automation on steroids."

Just ask Andrew Ng: artificial intelligence shouldn't conjure visions of SkyNet at this point; there is literally zero reason for this unfounded train of thought. The real fear of AI (and a better expansion of the acronym) is "Automation Inundation."

Today, AI does not refer to sentience, but instead relates to automating a single or narrow set of functionality which is deemed to require "intelligence" of some sort to perform, an intelligence which has been mimicked for this specific and restricted skill. This type of AI is generally welcomed by the public when it comes to automating parts of life which offer a reasonable return on investment in free time (coffee makers and washing machines are typical examples); however, this welcoming attitude usually does not extend to the workplace, for reasons easy to distinguish.

It is the first 2 points which will have the greatest effect on minimum wage earners, both of which are already visible in the workplace. Point number 1, the automation of activities, has been ongoing since at least the onset of the industrial revolution -- you can't, and generally don't want to, stop innovation -- but the pace at which secondary, tertiary, and quaternary sectors are being affected by contemporary automation has increased dramatically of late.

It's not all bad news for all low wage earners. McKinsey points out that "the hourly rate alone is not a strong predictor of automatability, despite some correlation between the two." Landscaping workers are singled out in the figure below, and for good reason. Recall that the "intelligence" referred to in "artificial intelligence" is restricted to narrow sets of skills, and typically to well-defined locales. The chances of developing an end-to-end landscaping "intelligence" to deal with locale differences, a wide skill set, and the nuanced decision making which would occur at the intersection of these 2 requirements is not only impossible at this stage, but even if it were possible the ROI on development of such a system would likely be prohibitive. 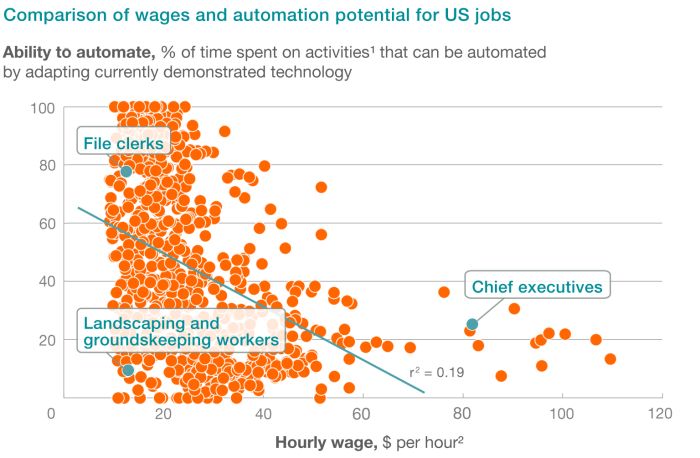 The future is automated. It's best to embrace and prepare for this inevitability. Doing so would be a much better use of time than would be musing about the upcoming and "inevitable" End Days courtesy of evil sentient robots and the like. Instead, do your best to safeguard your future, because there almost certainly will be one.