You have likely noticed the recent relative uptick in the use of the words "intelligence" and "cognitive," as well as their derivatives. Are such terms really true or are they a marketing device?

Machine learning is passe. "Artificial" is no longer a trendy form of "intelligence." Cognitive this, cognitive that.

Remember when "the cloud" and "data mining" were the big issues, either they were going to save us all, or doom our existence? To industry, they were the answer to everyone's problems (What problems? Doesn't matter!). To the uninitiated, hearing about security leaks and Big Data and their friend's uncle's babysitter being placed on some watch list for calling the wrong person from the airport and saying "tuna fish" on the call, it was End Times.

I was recently at a conference which threw around the latest "industry" (what industry?) buzzwords with astonishing generosity and unabashed liberalness. And did so, arguably, incorrectly, even considering the normalized general incorrectness of buzzword usage in "industry." 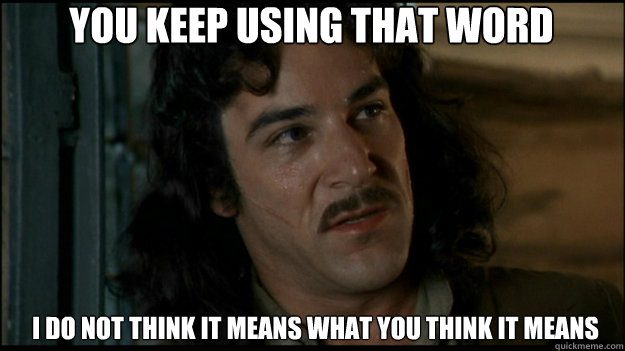 Anyhow, you have likely noticed the recent relative uptick in the use of the words "intelligence" and "cognitive" (and cognitive cognate, "cognition").

You have heard how Watson "solved" Jeopardy (marketingspeak: Cognitive platform delivers intelligence to the masses; luditespeak: We're all gonna die!). You know about pre-trained neural network models in the cloud using cognition to enhance intelligent decision making processes (read: API recognizes cats). You probably had someone tell you that AlphaGo is a "cognitive intelligence," as opposed to a series of algorithms working in tandem with the sole purpose of solving Go. And nothing else. I don't know about you, but I'm not sure we would be calling a human being who could only solve Go -- which would be a remarkable achievement -- and do, literally, nothing else "intelligent." The Rain Man of Go, but couldn't dial a phone, put on pants, or speak? I don't know if that balances the intelligence scales.

What are we doing throwing these terms around the way we do? I'm not a cognitive scientist and am not involved in neuroscience -- kind of the bigger point, here -- but I can't imagine that we're getting this correct. Like, actually correct.

It may not be about "intelligence" or "cognition," but this NY Times excerpt, encompassing a quote from Oren Etzioni, seems particularly apt:

“I would be very careful with terms like ‘superhuman performance,’ ” said Oren Etzioni, chief executive of the Allen Institute for Artificial Intelligence in Seattle. “Of course the calculator exhibits superhuman performance, with the possible exception of Dustin Hoffman,” he added, in reference to the actor’s portrayal of an autistic savant with extraordinary math skills in the movie “Rain Man.”

I know this is less informative and more of a rant, but anyone else want to weigh in here? Are we doomed to the enduring mis-classification of tech-based "intelligence," even amongst those who should know better? In the post-truth era, is the language of marketing steering the discussion on what it is that is actually happening, maybe even more so than in the past, or in other fields, industries, and technologies?