Improve your skills in every layer of the Data Science stack at ODSC West 2017 and test drive the leading open source tools. Save 60% with code KD60 until Sep 1. 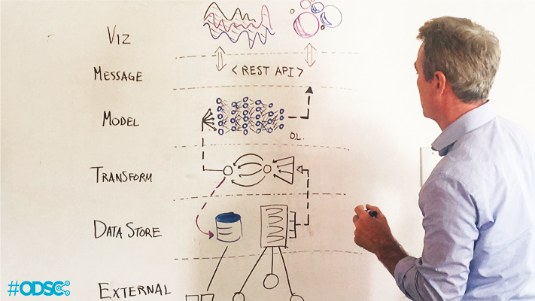 Register now for ODSC West and save 60% with code KD60 until September 1st.

Data Science is built on a rapidly expanding stack. Let me explain by using a software analogy. To build functioning web apps you need a data store, model (or business) layer, some kind of message layer, and a front-end, all running on the cloud. Think of it as a somewhat narrow vertical stack.

As little as a few years ago a data scientists could get away with just having deep expertise in the model layer with rudimentary, relatively speaking,  I/O and visualization skills. Knowing R or Python and producing results on a local machine sufficed since the layers could be compressed in good (hopefully) coding structure.

For most professional data scientists, those days are long gone. The vertical stack is now well established in data science. The kicker is that in many respects the stack for data science is also more horizontal or fatter than traditional software development stacks. Take the data store layer. Structured data stores may sit alongside unstructured data stores, or even real-time streaming data feeds. Thus you may end up with a layer composed of PostgreSQL, MongoDB, and Kafka with plenty to tools still to choose from. The transformation layer may be a combo of Spark and a language like Python, R or Julia.

However, it’s the model layer that data scientists start to detect a noticeable bulge. Chances are if you are working with various formats and sources of data you will be using a host of models and tools to suit. DL on TensorFlow for images, NLP on Spark for text, Prophet for time series, and so on. It’s also not uncommon to stack (aka meta ensemble) the models themselves to generate a new model.

ODSC West 2017 can be viewed as a full stack data science conference. We place a lot of emphasis on the modeling layer with beginner to advanced data science workshops and talks on topics in modeling such as:

Nobody can expect to be an expert in every layer of the stack. Quite the opposite. With today's plethora of tool releases, it’s extremely difficult to stay current. ODSC West 2017 is the perfect environment to test drive many of these tools such as:

With AI, the abstraction layer goes one step further up the stack. Whatever your flavor of AI is such as conversational AI, autonomous machines,, etc., AI is basically another layer on top of the stack. ODSC is on it also with talks and workshops on:

With over 20 full training session, 50 workshops and 100 speakers, ODSC West 2017 is ideal for beginners to experts looking to understand the latest in tools and topics in data science and AI

Register now and save 60% with code KD60 until September 1st.