We report on top influencers in Data science in 2017 and compare with similar reports reports from 2016.

By Thuy T. Pham, U. of Technology Sydney on August 7, 2017 in About KDnuggets, Data Science, Influencers, Top list 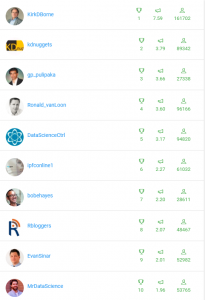 How the K-core influencer score is calculated? Relationships between people can be presented as graphs where vertices are entities and edges are connections among them. Finding communities in the graph can be done as finding subgraphs. In large-scale network analysis, K-core of a graph is a maximal connected subgraph in which every vertex is connected to at least k vertices in the subgraph.

According to Kcore Analytics reports, six influencers in the top ten of 2016 maintained their influence in the top ten of 2017. Among of these, @KirkDBorne, @KDnuggets, and @Ronald_vanLoon have more than new 30 thousand followers from 2016 to 2017. We use the last year number of followers to see the growth rate (given the released period is 412 days).  Some top handles increased less than 50% but still made the list. It might be explained by the depth of their influence network. For example, KDnuggets maintained the second ranked with just 41.5% growth rate. For handles not in the list of 2016, the growth rates are marked as NA. Below is table of the list with details of the scores and number of followers in 2017. The original rank for 2017 can be seen in the screenshot of this post. The 2016 report can be found in other sources e.g. here.