A popular example of reinforcement learning is a chess engine. Here, the agent decides upon a series of moves depending on the state of the board (the environment), and the reward can be defined as win or lose at the end of the game:

There are many different subtypes of reinforcement learning. However, a general scheme is that the agent in reinforcement learning tries to maximize the reward by a series of interactions with the environment. Each state can be associated with a positive or negative reward, and a reward can be defined as accomplishing an overall goal, such as winning or losing a game of chess. For instance, in chess the outcome of each move can be thought of as a different state of the environment. To explore the chess example further, let’s think of visiting certain locations on the chess board as being associated with a positive event—for instance, removing an opponent’s chess piece from the board or threatening the queen. Other positions, however, are associated with a negative event, such as losing a chess piece to the opponent in the following turn. Now, not every turn results in the removal of a chess piece, and reinforcement learning is concerned with learning the series of steps by maximizing a reward based on immediate and delayed feedback.

Clustering is an exploratory data analysis technique that allows us to organize a pile of information into meaningful subgroups (clusters) without having any prior knowledge of their group memberships. Each cluster that arises during the analysis defines a group of objects that share a certain degree of similarity but are more dissimilar to objects in other clusters, which is why clustering is also sometimes called unsupervised classification. Clustering is a great technique for structuring information and deriving meaningful relationships from data. For example, it allows marketers to discover customer groups based on their interests, in order to develop distinct marketing programs.

The following figure illustrates how clustering can be applied to organizing unlabeled data into three distinct groups based on the similarity of their features X1 and X2. 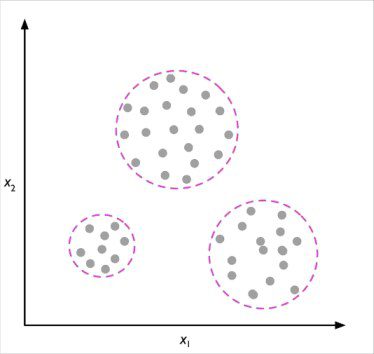 Another subfield of unsupervised learning is dimensionality reduction. Often we are working with data of high dimensionality—each observation comes with a high number of measurements—that can present a challenge for limited storage space and the computational performance of machine learning algorithms. Unsupervised dimensionality reduction is a commonly used approach in feature preprocessing to remove noise from data, which can also degrade the predictive performance of certain algorithms, and compress the data onto a smaller dimensional subspace while retaining most of the relevant information.

You should by now have a solid understanding of the basics of these three core areas of machine learning. If you’d like to learn more about the algorithms behind machine learning – and how to build them – you’ll find everything you need inside Python Machine Learning 2nd Edition.

use KDnuggets code PML250KDN to save 50% off the book cost.