Former U.S. Chief Data Scientist DJ Patil will be lending his expertise to DataScience.com’s product, engineering, and R&D teams as they expand the features of the company’s enterprise data science platform.

Los Angeles, CA, November 20, 2017 — DataScience.com has added former U.S. Chief Data Scientist DJ Patil — co-creator of the term “data science” — to its board of advisors, the body of experts who guide development of the company’s enterprise data science platform. In his new advisory role, Patil will work with DataScience.com’s product, engineering, and R&D teams as they build new features that boost the ability of enterprise companies to scale data science work. 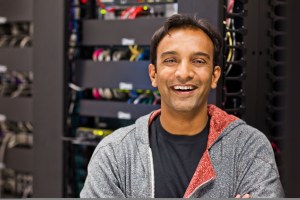 “Now more than ever, businesses need to derive value from data,” said Patil, who made it his mission to maximize the nation’s return on its investment in data during his tenure as U.S. chief data scientist. “At some companies, data science teams number in the hundreds or thousands. The work those teams do should be a competitive differentiator, but it often doesn’t have the impact that it should. Some common roadblocks are an inability to collaborate, a lack of reproducibility, and not having the right tools at the right time. Companies need a data science platform to overcome these barriers, and that’s what DataScience.com has built.”

Data science platforms are an emerging technology designed to bring together the many disparate tools data scientists rely on, from programming languages like Python or R to deep learning packages like TensorFlow, while also making it easy and efficient to put models into production. Forrester predicted last year that data science platform adoption would more than double by the end of 2018 as companies increasingly recognize their value. Thanks to the guidance of experts like Patil, DataScience.com Platform users have already seen value from their data science work while benefiting from robust environment management features, integrations with technology providers like MapR, and the ability to deploy models as APIs for easy integration with the applications of their choice.

“We’re excited to add one of the most influential people in the data science field to our advisory board,” said DataScience.com Chief Executive Officer Ian Swanson. “Our mission is to help companies get real, measurable ROI from data science work by giving data science, IT, and business teams the tools they need to collectively make an impact. Who better to help us do that than the man whose name is synonymous with data science teamwork?”

DataScience.com provides an enterprise data science platform that makes it easy and intuitive for data scientists to work collaboratively with IT and business teams on the data-driven projects that transform how companies do business. Explore and visualize data, share analyses, deploy models into production, and track performance — all from one place.