Get Network insights in Excel with NodeXL

NodeXL, the network overview discovery and exploration add-in for the familiar Microsoft Office Excel (TM) spreadsheet brings network functions within the reach of people who are more comfortable making pie charts than writing code. See what NodeXL finds in KDnuggets network and download NodeXL Pro for your analyses.

We now live in a sea of tweets, posts, blogs, and updates coming from a significant fraction of the people in the connected world. Our personal and professional relationships are now made up as much of texts, emails, phone calls, photos, videos, documents, slides, and game play as by face-to-face interactions.  Social media can be a bewildering stream of comments, a daunting fire hose of content.  With better tools and a few key concepts from the social sciences, the social media swarm of favorites, comments, tags, likes, ratings, updates and links can be brought into clearer focus to reveal key people, topics and sub-communities.  As more social interactions move through machine-readable data sets new insights and illustrations of human relationships and organizations become possible.  But new forms of data require new tools to collect, analyze, and communicate insights.

Networks are a common data structure - we live in a "network society" after all - but networks as a data structure have been out of the reach of many people who are not software developers.  NodeXL, the Network overview discovery and exploration add-in for the familiar Microsoft Office Excel (TM) spreadsheet brings network functions within the reach of people who are more comfortable making pie charts than writing code.  Networks are widely found throughout the world, business, and particularly social media.  Networks are created whenever things connect to other things.  All social media services create networks whenever they enable populations to author collections of connections among themselves.
The Social Media Research Foundation's NodeXL project makes analysis of social media networks accessible to most users of the Excel spreadsheet application.  With NodeXL, network charts become easy to create with just a few clicks.

The Social Media Research Foundation (http://www.smrfoundation.org), formed in 2010 to develop tools, data sets, and scholarship related to social media.  The Foundation's focus is on creating and publishing tools that enable social media network analysis and visualization from widely used services like email, Twitter, Facebook, flickr, YouTube and the WWW. The NodeXL project is a spreadsheet add-in that fits inside your existing copy of Microsoft Office Excel (2007, 2010, 2013 or 2016) and makes creating a social network map similar to the process of making a pie chart.

Using NodeXL's social media importer features, users can easily make a map of public social media conversations around topics that matter to them. Maps of the connections among the people who recently said the name of a product, brand or event can reveal key positions and clusters in the crowd.  Some people who talk about a topic are more in the "center" of the graph, they may be key influential members in the population.  NodeXL makes it a simple task to sort people in a population by their network location to find key people in core or bridge positions.  NodeXL supports the exploration of social media with import features that pull data from personal email indexes on the desktop, Twitter, Flickr, YouTube, Facebook, Wikis, blogs and WWW hyper-links. The tool allows non-programmers to quickly generate useful network statistics and metrics and create visualizations of network graphs.

A book Analyzing Social Media Networks with NodeXL: Insights from a connected world is available from Morgan-Kaufmann.  The book provides an introduction to the history and core concepts of social network analysis along with a series of step-by-step instructions that illustrate the use of the key features of NodeXL.  The second half of the book is dedicated to chapters by a number of leading social media researchers that each focus on a single social media service and the networks it contains. Chapters on Twitter, email, YouTube, flickr, Facebook, Wikis, and the World Wide Web illustrate the network data structures that are common to all social media services.

A recent report co-authored with the Pew Research Center's Internet Project documents the discovery of the six basic forms of social media network structures present in social media platforms like Twitter.
The report, "Mapping Twitter Topic Networks: From Polarized Crowds to Community Clusters" provides a step by step guide to analyzing social media networks.  A video overview of this report can be found at https://www.youtube.com/watch?v=kDiGl-2m868.

An example is a recent NodeXL map of the network created when people tweet the term KDNuggets in Twitter: 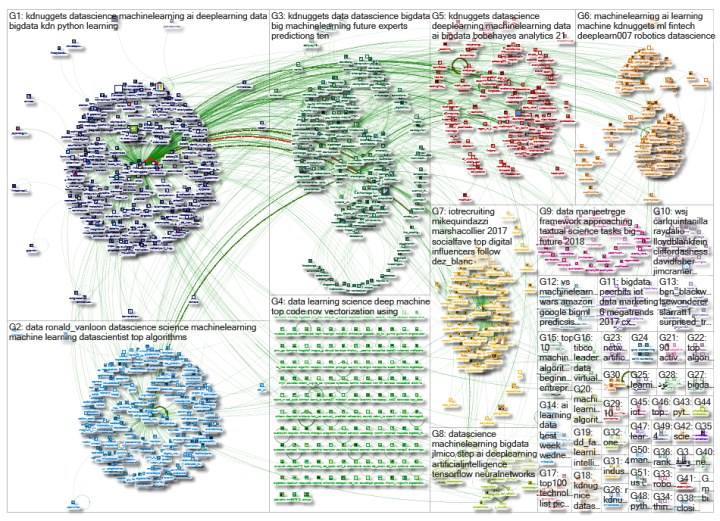 The "hub-and-spoke" structures that are prominent in many of the largest groups are an indication that "kdnuggets" is a "broadcast" topic in which most people retweet the messages shared by a small group of core contributors.  Group 4 is a composed of people with zero connections (these are "isolates" - users who did not mention anyone else while tweeting about "KDnuggets" nor did anyone mention them).  This group is an indication of the "brand" quality or public visibility of "KDnuggets".  Major brands often have a large group of isolate users in the G1 position in their network. 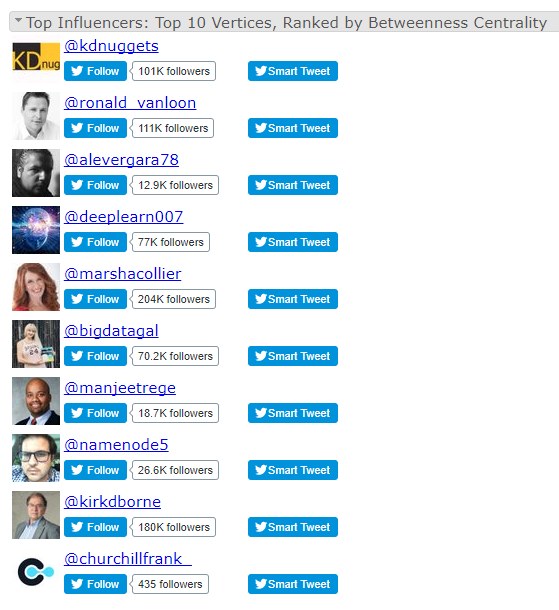 These contributors (@kdnuggets, @ronald_vanloon, @alevergara78, @deeplearn007, @marshacollier, @bigdatagal, @manjeetrege, @namenode5, @kirkdborne, @churchillfrank_) may not have the most followers (although many have large followings) but they do have high centrality.  Centrality is the property of being in the middle of a group and betweenness centrality is the quality of being most like a "bridge" among otherwise disconnected people.

Each of the hub-and-spoke broadcast clusters has a slightly different set of topics of interest, as illustrated by the list of most frequently used hashtags labeling each of the groups.  Group 1 mentions #neuralnetworks, while group 2 is focused on #datascience.

The goal of NodeXL is to expand access to network data sets to people without advanced programming and data analysis skills.  To help people "Think Link", NodeXL converts network data sets into a set of worksheets in an Excel workbook.  For people who can currently make a bar chart or pie chart, it is now possible to collect, store, analyze, visualize, and report on network structures with just a few clicks.