This is a summary of 12 key lessons that machine learning researchers and practitioners have learned include pitfalls to avoid, important issues to focus on and answers to common questions. 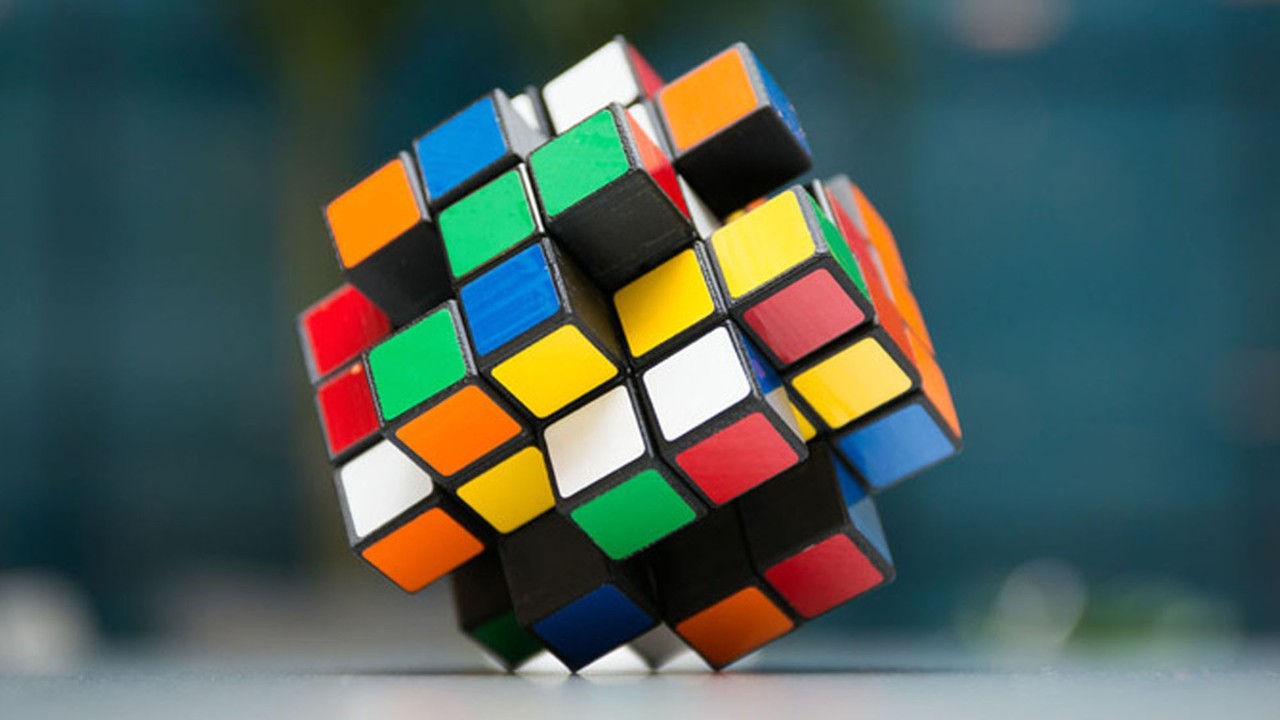 Machine learning algorithms can figure out how to perform important tasks by generalizing from examples. This is often feasible and cost-effective where manual programming is not. As more data becomes available, more ambitious problems can be tackled. As a result, machine learning is widely used in computer sincere and other fields. However, developing successful machine learning applications requires a substantial amount of “black art” that is hard to find in textbooks.

I recently read an amazing technical paper by Professor Pedro Domingos of the University of Washington titled “A Few Useful Things to Know about Machine Learning.” It summarizes 12 key lessons that machine learning researchers and practitioners have learned include pitfalls to avoid, important issues to focus on and answers to common questions. I’d like to share these lessons in this article because they are extremely useful when thinking about tackling your next machine learning problems.

The fundamental goal of machine learning is to generalize beyond the examples in the training set. This is because, no matter how much data we have, it is very unlikely that we will see those exact examples again at test time. Doing well on the training set is easy. The most common mistake among machine learning beginners is to test on the training data and have the illusion of success. If the chosen classifier is then tested on new data, it is often no better than random guessing. So, if you hire someone to build a classifier, be sure to keep some of the data to yourself and test the classifier they give you on it. Conversely, if you’ve been hired to build a classifier, set some of the data aside from the beginning, and only use it to test your chosen classifier at the very end, followed by learning your final classifier on the whole data. 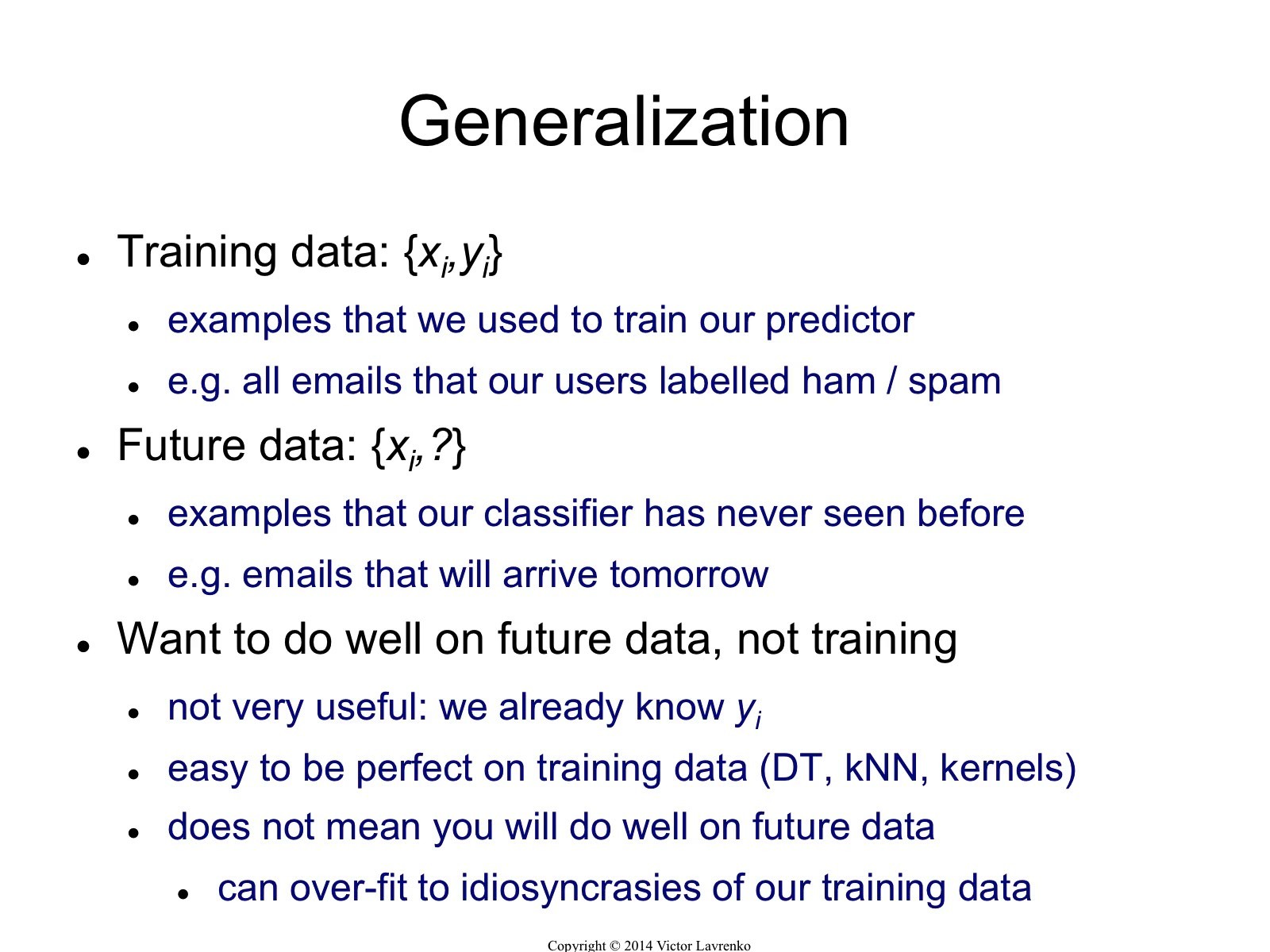 3 — Data Alone is Not Enough

Generalization being the goal has another major consequence: data alone is not enough, no matter how much of it you have.

This seems like rather depressing news. How then can we ever hope to learn anything? Luckily, the functions we want to learn in the real world are not drawn uniformly from the set of all mathematically possible functions! In fact, very general assumptions — like smoothness, similar examples having similar classes, limited dependencies, or limited complexity — are often enough to do very well, and this is a large part of why machine learning has been so successful. Like deduction, induction (what learners do) is a knowledge lever: it turns a small amount of input knowledge into a large amount of output knowledge. Induction is a vastly more powerful lever than deduction, requiring much less input knowledge to produce useful results, but it still needs more than zero input knowledge to work. And, as with any lever, the more we put in, the more we can get out. 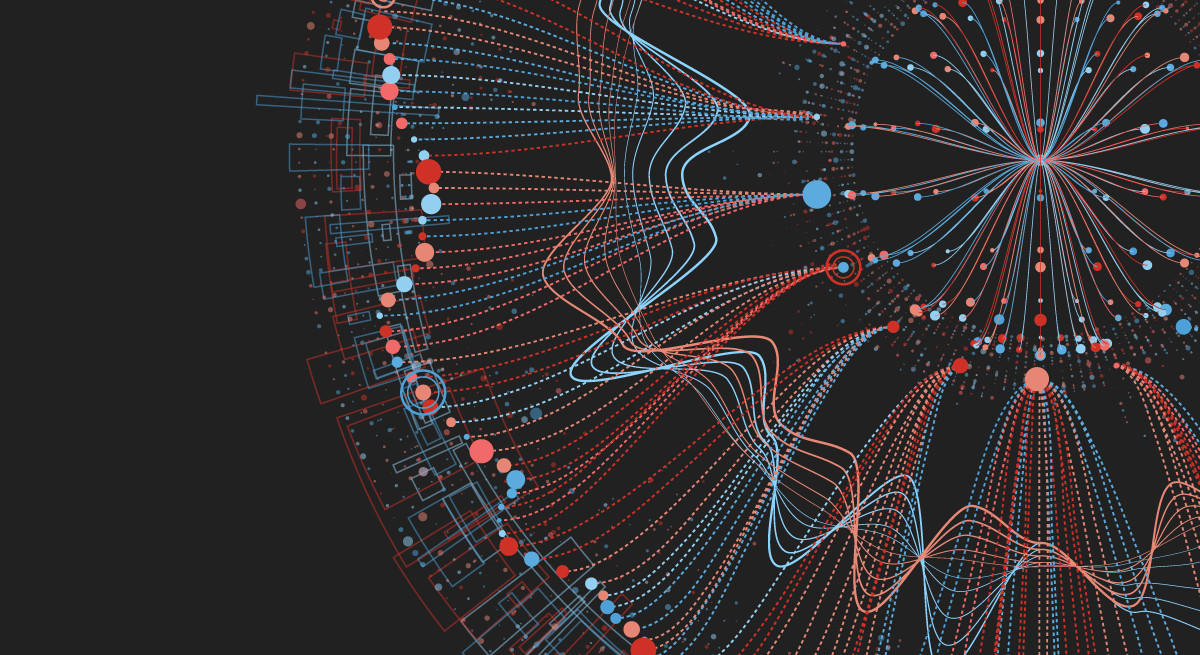 In retrospect, the need for knowledge in learning should not be surprising. Machine learning is not magic; it can’t get something from nothing. What it does is get more from less. Programming, like all engineering, is a lot of work: we have to build everything from scratch. Learning is a more like farming, which lets nature do most of the work. Farmers combine seeds with nutrients to grow crops. Learners combine knowledge with data to grow programs.

4 — Overfitting Has Many Faces

What if the knowledge and data we have are not sufficient to completely determine the correct classifier? Then we run the risk of just hallucinating a classifier (or parts of it) that is not grounded in reality and is simply encoding random quirks in the data. This problem is called overfitting and is the bugbear of machine learning. When your learner outputs a classifier that is 100% accurate on the training data but only 50% accurate on test data, when in fact it could have output one that is 75% accurate on both, it has overfitted.

Everyone in machine learning knows about overfitting, but it comes in many forms that are not immediately obvious. One way to understand overfitting is by decomposing generalization error into bias and variance. Bias is a learner’s tendency to consistently learn the same wrong thing. Variance is the tendency to learn random things irrespective of the real signal. A linear learner has high bias, because when the frontier between two classes is not a hyperplane the learner is unable to induce it. Decision trees don’t have this problem because they can represent any Boolean function, but on the other hand, they can suffer from high variance: decision trees learned on different training sets generated by the same phenomenon are often very different, when in fact they should be the same. 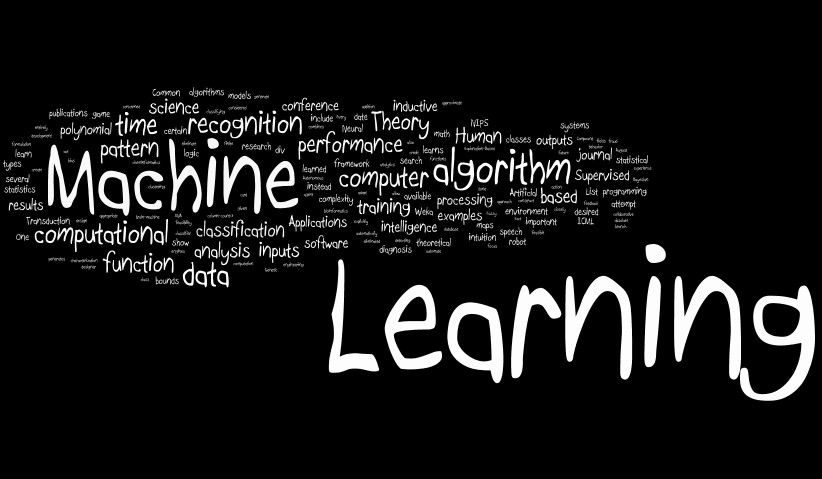 Cross-validation can help to combat overfitting, for example by using it to choose the best size of the decision tree to learn. But it’s no panacea since if we use it to make too many parameter choices it can itself start to overfit.

Besides cross-validation, there are many methods to combat overfitting. The most popular one is adding a regularization term to the evaluation function. This can, for example, penalize classifiers with more structure, thereby favoring smaller ones with less room to overfit. Another option is to perform a statistical significance test like chi-square before adding new structure, to decide whether the distribution of the class really is different with and without this structure. These techniques are particularly useful when data is very scarce. Nevertheless, you should be skeptical of claims that a particular technique “solves” the overfitting problem. It’s easy to avoid overfitting (variance) by falling into the opposite error of underfitting (bias). Simultaneously avoiding both requires learning a perfect classifier, and short of knowing it in advance there is no single technique that will always do best (no free lunch).

After overfitting, the biggest problem in machine learning is the curse of dimensionality. This expression was coined by Bellman in 1961 to refer to the fact that many algorithms that work fine in low dimensions become intractable when the input is high-dimensional. But in machine learning, it refers to much more. Generalizing correctly becomes exponentially harder as the dimensionality (number of features) of the examples grow, because a fixed-size training set covers a dwindling fraction of the input space.

The general problem with high dimensions is that our intuitions, which come from a 3-dimensional world, often do not apply in high-dimensional ones. In high dimensions, most of the mass of a multivariate Gaussian distribution is not near the mean, but in an increasingly distant “shell” around it; and most of the volume of a high-dimensional orange is in the skin, not the pulp. If a constant number of examples is distributed uniformly in a high-dimensional hypercube, beyond some dimensionality most examples are closer to a face of the hypercube than to their nearest neighbor. And if we approximate a hypersphere by inscribing it in a hypercube, in high dimensions almost all the volume of the hypercube is outside the hypersphere. This is bad news for machine learning, where shapes of one type are often approximated by shapes of another.

Building a classifier in 2 or 3 dimensions is easy; we can find a reasonable frontier between examples of different classes just by visual inspection. But in high dimensions, it’s hard to understand what is happening. This, in turn, makes it difficult to design a good classifier. Naively, one might think that gathering more features never hurts, since at worst they provide no new information about the class. But in fact, their benefits may be outweighed by the curse of dimensionality.

6 — Theoretical Guarantees are Not What They Seem

Machine learning papers are full of theoretical guarantees. The most common type is a bound on the number of examples needed to ensure good generalization. What should you make of these guarantees? First of all, it’s remarkable that they are even possible. Induction is traditionally contrasted with deduction: in deduction, you can guarantee that the conclusions are correct; in induction, all bets are off. Or such was the conventional wisdom for many centuries. One of the major developments of recent decades has been the realization that in fact, we can have guarantees on the results of induction, particularly if we’re willing to settle for probabilistic guarantees.

We have to be careful about what a bound like this means. For instance, it does not say that, if your learner returned a hypothesis consistent with a particular training set, then this hypothesis probably generalizes well. What is says is that, given a large enough training set, with high probability, your learner will either return a hypothesis that generalizes well or be unable to find a consistent hypothesis. The bound also says nothing about how to select a good hypothesis space. It only tells us that, if the hypothesis space contains the true classifier, then the probability that the learner outputs a bad classifier decreases with training set size. If we shrink the hypothesis space, the bound improves, but the chances that it contains the true classifier shrink also. 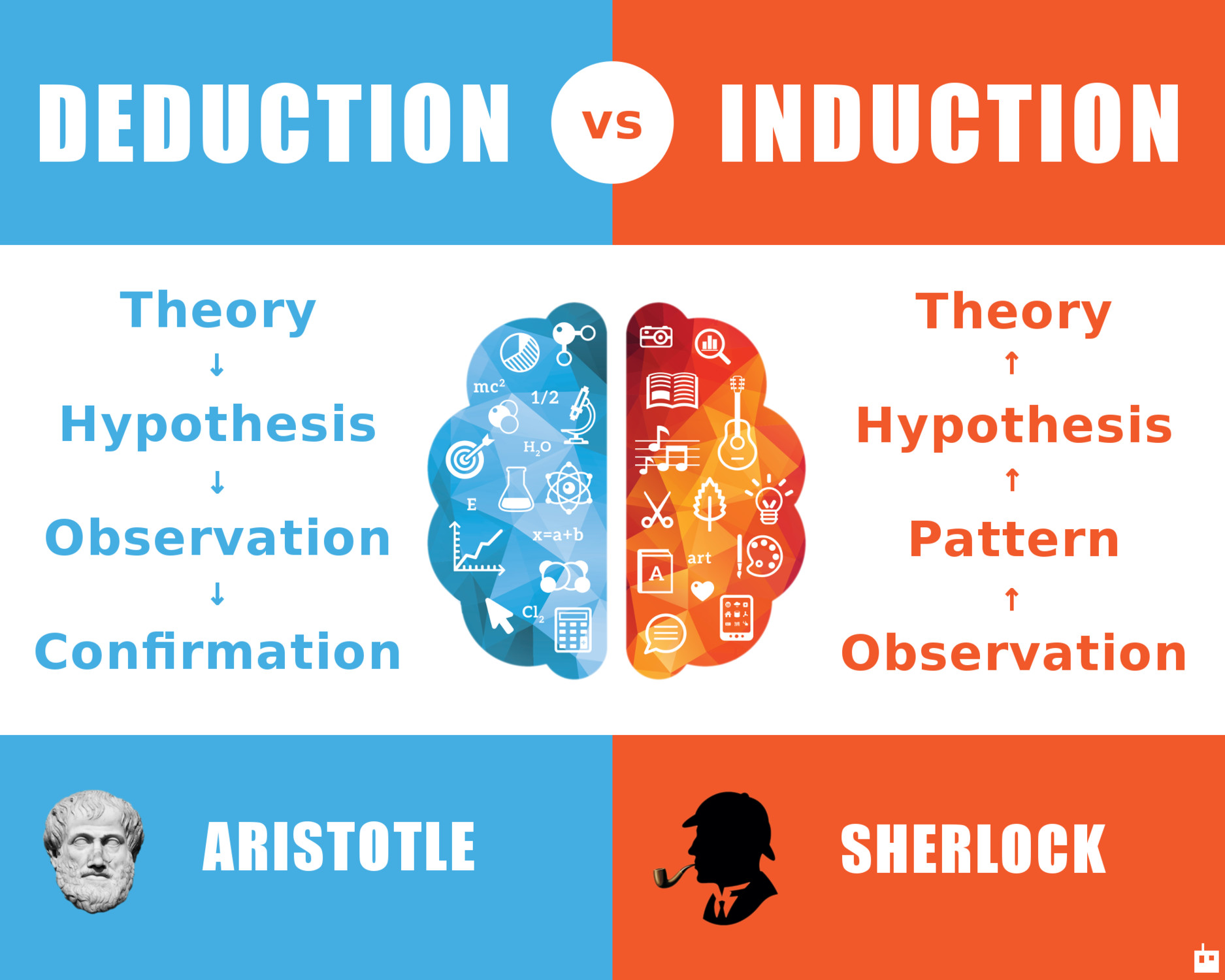 Another common type of theoretical guarantee is asymptotic: given infinite data, the learner is guaranteed to output the correct classifier. This is reassuring, but it would be rash to choose one learner over another because of its asymptotic guarantees. In practice, we are seldom in the asymptotic regime (also known as “asymptopia”). And, because of the bias-variance tradeoff discussed above, if learner A is better than learner B given infinite data, B is often better than A given finite data.

The main role of theoretical guarantees in machine learning is not as a criterion for practical decisions but as a source of understanding and driving force for algorithm design. In this capacity, they are quite useful; indeed, the close interplay of theory and practice is one of the main reasons machine learning has made so much progress over the years. But caveat emptor: learning is a complex phenomenon, and just because a learner has a theoretical justification and works in practice doesn’t mean the former is the reason for the latter.