Football World Cup 2018 Predictions: Germany vs Brazil in the final, and more

Looking ahead to the FIFA World Cup that kicks off this month (14th June), we have created the official KDnuggets predictions.

The 2018 FIFA World Cup is fast approaching, with the opening match between hosts Russia and Saudi Arabia kicking off the action on the 14th June.

Being a fanatical fan, I decided to do some data analysis to determine who the tournament favorites are. Taking some inspiration from the FiveThiryEight’s 2014 World Cup predictions, I considered the following systems:

Once I had collected all this information, I had to somehow merge them together to determine who was the overall favorite. All of the systems were on different scales; TransferMarkt’s figures are in Euros, whilst FIFA and Elo have their own rating system and the betting odds are in fractions. I standardized each to make them comparable. In statistics, the standard scores (also referred to as the z-scores/values, normal scores or standerdized values) are the number of standard deviations by which the value differs from the mean.

The below shows the results from this analysis: 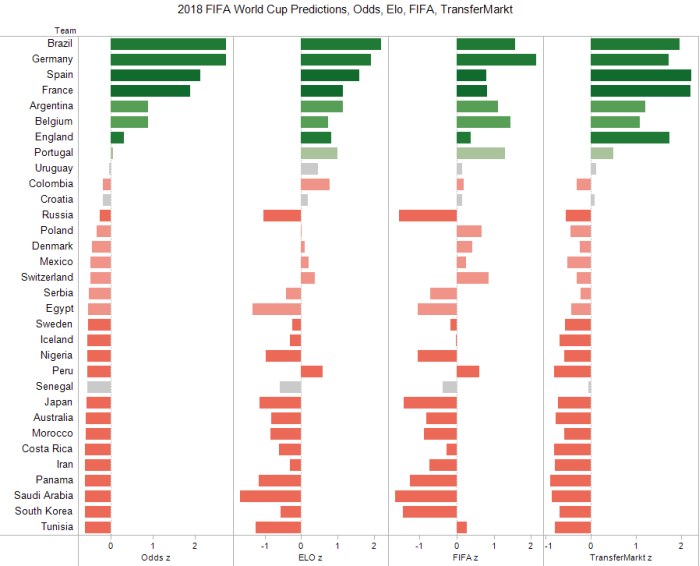 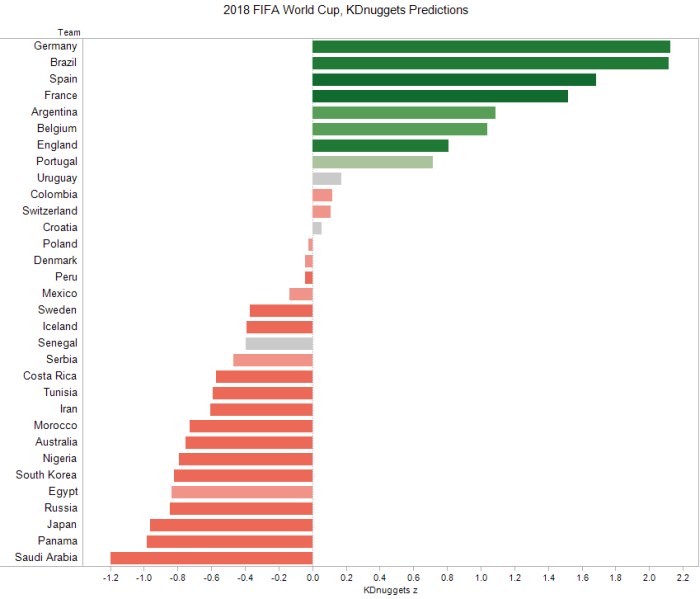 And the below shows how the World Cup brackets will turn out, if the KDnuggets predictions are correct:

The results brought up some interesting takeaways:

See below for a collection of other predictions ahead of the World Cup:

The Telegraph have an extensive analysis into each team, with a poll at the end to let readers have their say on who will lift the trophy.

Sporting life has not only attempted to calculate who will win the tournament, but they’ve also gone through each country and predicted at what stage they will leave the tournament.

And finally, both CBS Sports and Huffington Post have produced handy articles on who American Soccer fans should be rooting for this summer, following the US team’s elimination last year.