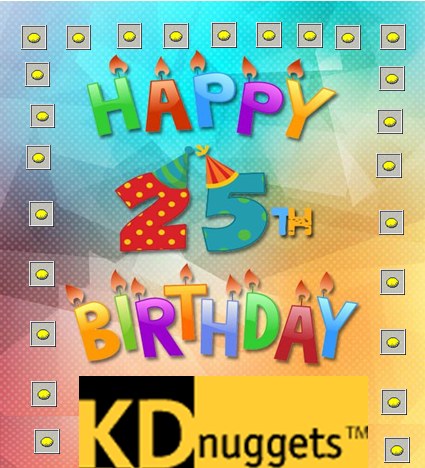 Almost exactly 25 years ago, on July 20, 1993, I emailed the very first issue of KDnuggets News to about 50 researchers who attended KDD-93 (Knowledge Discovery in Databases) workshop I organized in Anaheim, CA.

KDnuggets website followed about a year later, initially called Knowledge Discovery Mine which was the 2nd website in the world on the topic of data mining and knowledge discovery.

I started KDnuggets - both the website and the newsletter - as a service to help connect researchers that attended KDD Workshops and later KDD conferences that I helped organize.

All this was a purely volunteer, unpaid, activity until fall of 1999, when the startup, where I was a chief scientist, was hit by the Y2K freeze. The startup was providing analytics / data mining services to financial institutions, but the banks and insurance companies completed their Y2K testing and did not want to do any changes until year 2000. Both our work and our salaries were cut significantly.

With more time and less money, I experimented with putting some ads on KDnuggets, which by that time grew to several thousand email subscribers.

After our startup has crashed in dot-com bust of 2001, I left it and was publishing KDnuggets and doing consulting since then. In the last few years, KDnuggets grew so much that I stopped consulting and now work on KDnuggets full-time.

It is amazing that KDnuggets survived and thrived for 25 years.

Our mission has always been to cover what is interesting in the field, and even though the names kept changing - Data Mining / Knowledge Discovery in Data / KDD / Predictive Analytics / Data Science / Machine Learning, the essence has remained the same - understanding the world around us objectively, via data, and using this data to extract useful knowledge, including predicting the future. Data Science, Machine Learning and AI are perhaps the most important technologies of our time. We cover them, writing for the practitioners. Of course, with 500,000 visitors, we now have more tutorials and opinions aimed at beginning Data Scientists, but we continue to publish more advanced content as well.

We are not always serious - check our cartoons.

I think our success was due to our aiming at high quality while keeping the volume low - finding and selecting only a few interesting and relevant "nuggets" to share with our audience.

I have aimed to do business ethically, and I have never made business decisions which had questionable morals.

Of course KDnuggets would not be possible without help I have received from many people over the years, including Chris Matheus who helped start the initial Knowledge Discovery Mine at GTE, Michael Beddows who helped run it in 1990s, Anmol Rajpurohit was helping run KDnuggets in 2014-16, and our interns and contributors, including Devendra Desale, Grant Marshall, Geethika Bhavya, Ilan Reinstein, Jitendra Mudhol, Pedro Lopez, Prasad Pore, Ran Bi, Reena Shaw, Schweta Bhatt, Thuy Pham, Zack Lipton, and others.

Of course our success is also due to our authors and contributors who send us many blogs - please continue to do so, and see our submission guidelines.

Our current success is due in large part to excellent work by Matthew Mayo, KDnuggets Editor, and Dan Clark, KDnuggets Assistant Editor and Contributor.

Here is to many more years of KDnuggets!

Here are 25 years of KDnuggets News: I was very happy to see nice comments on LinkedIn:

Here are some of them:

Bonnie Holub, Senior Data Science and Analytics Leader
Wow, that went fast! 25 years of insightful observations, even-handed reviews, and strong community building. Thanks for your work! Keep it up.

Alec Smith, Head of People Operations at Spaceship
Congratulations Gregory! KDnuggets has been an incredible resource for me, especially when I was getting my head around the field. And being awarded a top blogging badge in 2016 remains one of my proudest achievements!