We can use Pandas to conduct Bayes Theorem and Scikitlearn to implement the Naive Bayes Algorithm. We take a step by step approach to understand Bayes and implementing the different options in Scikitlearn.

First, the categorical variables will need to be encoded.

Then we can create our training and test sets

Next, we can go on to fit our model and make predictions

It seems that the predictions have all returned 'yes'. This will have implications when evaluating the model as you will see.

The Multinomaial model gives us an accuracy of 60%
The RECALL (TRUE POSITIVE RATE) for the model is 100% due to there being no false negatives as there were no '0' classes predicted. Recall is calculated by [True positive/(True Positive+False Negative)]. Unfortunately, this is not acceptable because it unfathomable to have a 100% recall in a real world situation. This is merely the mathematics at play that require human interpretation to assess its suitability.

As the Gaussian Naive Bayes prefers continuous data, we are going to use the Pima Indians Diabetes datset

As we can see all the features are continuous.

The loop will tell us whether the data is normally distributed using the famous Shapiro-Wilkes test.

None of the features appear to be normally distributed.

Lets take it one step further and visualize their distributions 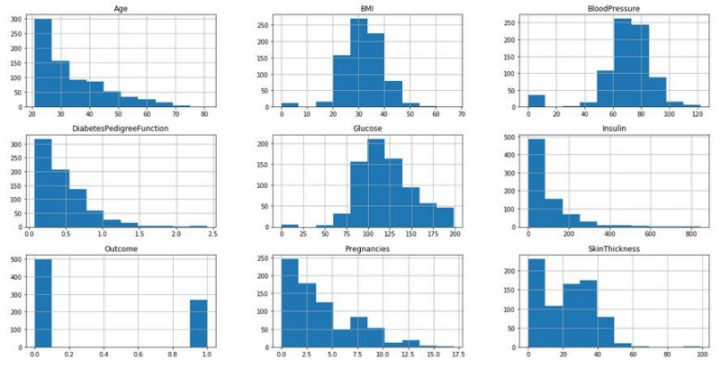 Upon visual inspection BMI and Blood Pressure seem to follow a normal distribution but the outliers on either side and the hypothesis test will have us think otherwise. Although the assumption
does not hold, we can still move forward to fit the model.

This time we can compute a Recall (True Positive Rate) as now both classes have been predicted.

I use average='binary' because our target variable is a binary target (0 and 1).
The model gives us a True Positive Rate (Recall) of 62%.

I had trouble obtaining the Accuracy for the model so we can just compute it manually:

The Gaussian model gives us 74% accuracy

Why use Naive Bayes as a baseline Classifier for performance?

My thoughts as to why Naive Bayes should be the first model to create and compare is that:

All of the above can be used as valid points that other classifiers should be built to outperform the Naive Bayes model. While Naive Bayes is great for spam filtering and Recommendation Systems, it is probably not ideal in most other applications.

Overall Naive Bayes is fast, powerful and interpretable. However, the overreliance on the prior probability of the target variable can create very misleading and inaccurate results. Classifiers such as Decision Trees, Logistic Regression, Random Forests and Ensemble methods should be able to outperform Naive bayes to be an actually useful. This is is no way removes Naive Bayes as a powerful classifier. The independence assumption, inability to handle interactions, and gaussian distribution assumption make it a very difficult algorithm to trust with prediction on its own as these models will have to be continuously upated.