Properties of the probability density function

In this case, p(x) is not necessarily less than 1 because it doesn’t correspond to the probability (the probability itself will still need to be between 0 and 1).

For instance, let’s say that we have a continuous random variable that can take values between 0 and 0.5. This variable is described by a uniform distribution so we will have the following probability distribution function:

Probability density function (uniform distribution). The area under the curve is equal to 1 (2×0.5) and the y-values are greater than 1.

We can see that the y-values are greater than 1. The probability is given by the area under the curve and thus it depends on the x-axis as well.

🤨 If you are like to see this by yourself, we will reproduce this example in Python. To do that we will create a random variable x that can take a value between 0 and 0.5 randomly. The uniform distribution will be used thanks to the Numpy function random.uniform(). The parameters of this function are the lowest value (included), the highest value (not included) and the number of samples. So np.random.uniform(0, 0.5, 10000) will create 10000 value randomly chosen to be ≥0 and <0.5. 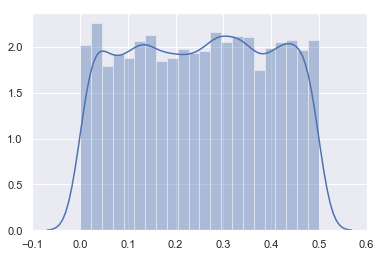 We can see that the shape looks like what I draw above with y-axis values around 2 for all x between 0 and 0.5.

However, one thing can be intriguing in this plot. We talked about continuous variable and here we have represented the distribution with bars. The explanation is the same as before: we need to discretise the function to count the number of outcomes in each interval. Actually, the number of intervals is a parameter of the function distplot(). Let’s try to use a lot of bins: 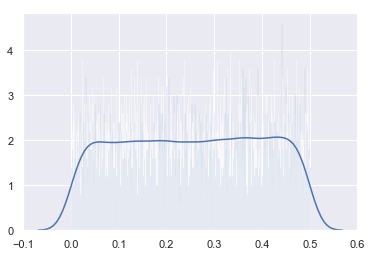 We can see that we are still around 2 but that the variability is greater than before (the bars can go from 1 to 4 which was not the case in the last plot). Any idea why?🤔

💡This is because since we took more bins, a smaller number of values were in each bin leading to a less accurate estimate. If this hypothesis is true, we could reduce this variability by increasing the number of samples. Let’s try that: 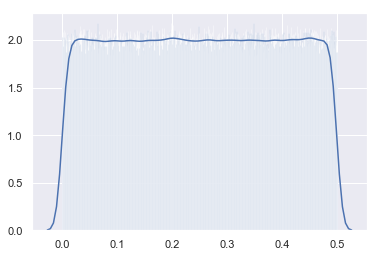 We can now go to the second property!

We saw in the last example, that the area was actually equal to 1. It can be easily obtained and visualised because of the squared shape of the uniform distribution. It is thus possible to multiply the height by the width: 2×0.5=1.

However, in many cases, the shape is not a square and we still need to calculate the area under the curve. Let’s see how to do this!

🔧 Area under the curve

Let’s start with a point on derivative! And then, with the next graphical example, it will be crystal clear. 🔮

We want to modelise the speed of a vehicle. Let’s say that the function f(x)=x2

define its speed (y-axis) in function of time (x-axis).

First, we will plot the function f(x)=x2it to see its shape: 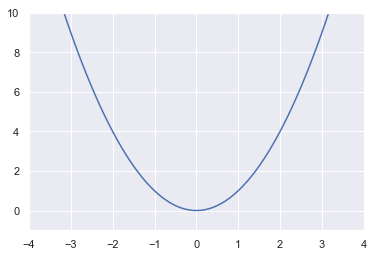 The shape is a parabola! It shows that the speed increases slowly at the beginning but increases more and more for a constant duration.

I have created a variable x (with the function arange() from Numpy) that contains all the points of the x-axis. So it is just all values from -10 to 10 with a step of 0.1. Let’s see the first 10 values.

Here is the doc of the arange() function from Numpy.

In our example, the function defines the speed of the vehicle in function of time so it doesn’t make sense to have negative values. Let’s take only the positive part of the x-axis to avoid negative time (we’ll say that 0 is the start of the experiment). 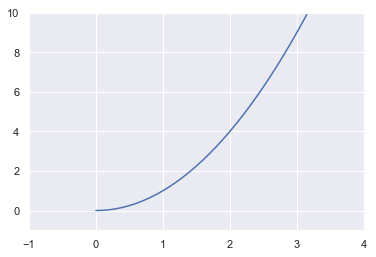 The derivative of this function is f′(x)=2x. To have more information about derivative rules, check here. 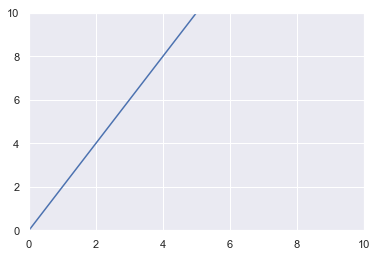 Being able to calculate derivatives is very powerful but is it possible to do the reverse: going from the rate of change to the change itself 😮. Whoah, this is cool! The answer is given by the integral of a function.

The integral of f′(x) gives us f(x) back. The notation is the following:

This means that we take f′(x) to get back f(x). The notation dx here means that we integrate over x, that is to say, that we sum slices weighted by y (see here).

If we take again the last example we have:

We can see that there is a difference: the addition of a constant c. This is because an infinite number of function could have given the derivative 2x (for instance x2+1 or x2+294…). We lose a bit of information and we can’t recover it.

And now, the graphical explanation (I love this one 💛): we have seen that 2x is the function describing the rate of change (the slope) of the function x2. Now if we go from f′(x) to f(x) we can see that the area under the curve of f′(x) correspond to f(x):

The area under the curve of f′(x) corresponds to f(x). This shows how the integral and derivative are reverse operations.

This plot shows the function f′(x)=2x and we can see that the area under the curve increases exponentially. This area is represented for different ranges ([0-0], [0-1], [0-2], [0-3]). We can calculate the area under the curve (using the Pythagorean theorem and dividing by 2 since the areas are half squares) and find the following values: 0, 1, 4, 9… This corresponds to the original function f(x)=x2! 🎺

You now have all the tools to dive more into probability. The next part will be about the chapters 3.4 to 3.8. We will see what we called marginal and conditional probability, the chain rule and the concept of independence.

I hope that this helped you to gain a better intuition on all of this! Feel free to contact me about any question/note/correction! 😀

Bio: Hadrien Jean is a machine learning scientist at Ava Accessibility and has personal interests in Full Stack Web Development and Data Science.