Building an Analytics Career at U. Chicago


Tags: Career, Chicago, MS in Analytics, U. of Chicago

Michael Collela describes how UChicago’s Master of Science in Analytics has helped him define his career path. Michael currently works as a data scientist at dunnhumby. 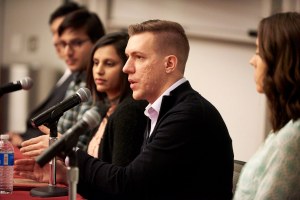 After completing his undergraduate degree in cognitive behavioral science, Michael accumulated an array of professional and academic experience in research and also earned his master’s in psychology in a program whose emphasis on corporate organization confirmed the career path he was starting. Michael is currently a solutions director for the world's first customer data science platform, London-based dunnhumby. He collaborates with other UChicago graduates as as both colleagues and clients.

“I started seeing that my heart was in business,” he says. “So I began leveraging my science and research background in any way I could as I made my transition into this new area.

“I don’t think that I could’ve got my foot in the door in my next role at Kraft Heinz had they not seen I was in the UChicago Master of Science in Analytics program,” he adds. “It speaks not only to my passion and experience with analytics, but to the high regard the analytics industry has for the program and the caliber of its graduates.”

Michael says that the quality of the instructors and their willingness to engage with him directly in a mentoring role has allowed him to clarify questions he had about his career path.

“These are people at the forefront of their industries,” he says. “Spending time with them in class and getting to know them and their perspectives on the world adds an indefinable quotient that you simply won’t get elsewhere, even where you’re otherwise learning ostensibly similar material.”

UChicago is currently accepting applications from students who plan to start their degree in autumn 2020. Start your application here ›