With so much to learn and so many advancements to follow in the field of data science, there are a core set of foundational concepts that remain essential. Twenty of these ideas are highlighted here that are key to review when preparing for a job interview or just to refresh your appreciation of the basics.

Just as the name implies, data science is a branch of science that applies the scientific method to data with the goal of studying the relationships between different features and drawing out meaningful conclusions based on these relationships. Data is, therefore, the key component in data science. A dataset is a particular instance of data that is used for analysis or model building at any given time. A dataset comes in different flavors such as numerical data, categorical data, text data, image data, voice data, and video data. A dataset could be static (not changing) or dynamic (changes with time, for example, stock prices). Moreover, a dataset could depend on space as well. For example, temperature data in the United States would differ significantly from temperature data in Africa. For beginning data science projects, the most popular type of dataset is a dataset containing numerical data that is typically stored in a comma-separated values (CSV) file format. 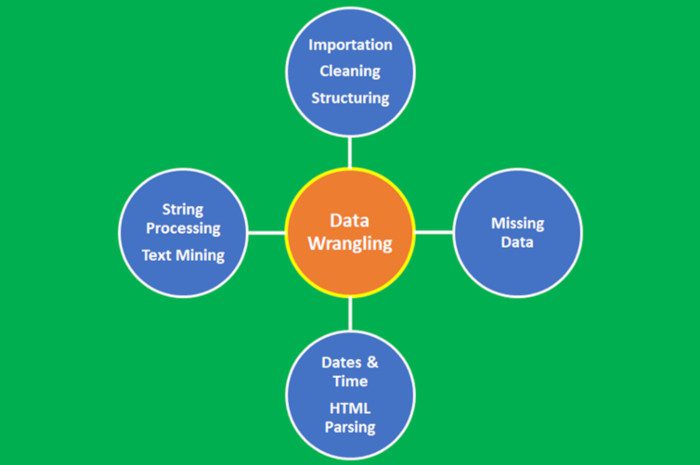 An example of data wrangling using the college towns dataset can be found here: Tutorial on Data Wrangling 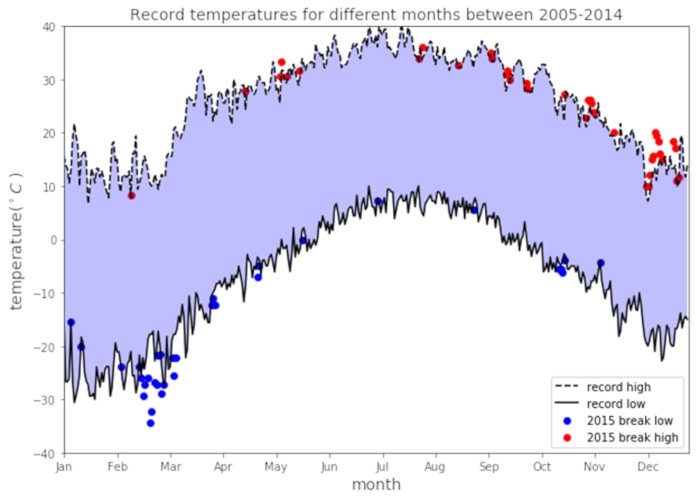 An outlier is a data point that is very different from the rest of the dataset. Outliers are often just bad data, e.g., due to a malfunctioned sensor; contaminated experiments; or human error in recording data. Sometimes, outliers could indicate something real such as a malfunction in a system. Outliers are very common and are expected in large datasets. One common way to detect outliers in a dataset is by using a box plot. Figure 3 shows a simple regression model for a dataset containing lots of outliers. Outliers can significantly degrade the predictive power of a machine learning model. A common way to deal with outliers is to simply omit the data points. However, removing real data outliers can be too optimistic, leading to non-realistic models. Advanced methods for dealing with outliers include the RANSAC method. 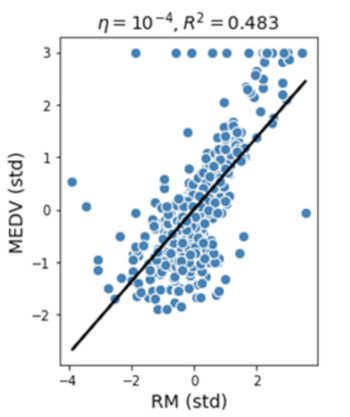 Most datasets contain missing values. The easiest way to deal with missing data is simply to throw away the data point. However, the removal of samples or dropping of entire feature columns is simply not feasible because we might lose too much valuable data. In this case, we can use different interpolation techniques to estimate the missing values from the other training samples in our dataset. One of the most common interpolation techniques is mean imputation, where we simply replace the missing value with the mean value of the entire feature column. Other options for imputing missing values are median or most frequent (mode), where the latter replaces the missing values with the most frequent values. Whatever imputation method you employ in your model, you have to keep in mind that imputation is only an approximation, and hence can produce an error in the final model. If the data supplied was already preprocessed, you would have to find out how missing values were considered. What percentage of the original data was discarded? What imputation method was used to estimate missing values?

Scaling your features will help improve the quality and predictive power of your model. For example, suppose you would like to build a model to predict a target variable creditworthiness based on predictor variables such as income and credit score. Because credit scores range from 0 to 850 while annual income could range from $25,000 to $500,000, without scaling your features, the model will be biased towards the income feature. This means the weight factor associated with the income parameter will be very small, which will cause the predictive model to be predicting creditworthiness based only on the income parameter.

Large datasets with hundreds or thousands of features often lead to redundancy especially when features are correlated with each other. Training a model on a high-dimensional dataset having too many features can sometimes lead to overfitting (the model captures both real and random effects). In addition, an overly complex model having too many features can be hard to interpret. One way to solve the problem of redundancy is via feature selection and dimensionality reduction techniques such as PCA. Principal Component Analysis (PCA) is a statistical method that is used for feature extraction. PCA is used for high-dimensional and correlated data. The basic idea of PCA is to transform the original space of features into the space of the principal component. A PCA transformation achieves the following:

a) Reduce the number of features to be used in the final model by focusing only on the components accounting for the majority of the variance in the dataset.

b) Removes the correlation between features.

An implementation of PCA can be found at this link: PCA Using Iris Dataset

PCA and LDA are two data preprocessing linear transformation techniques that are often used for dimensionality reduction to select relevant features that can be used in the final machine learning algorithm. PCA is an unsupervised algorithm that is used for feature extraction in high-dimensional and correlated data. PCA achieves dimensionality reduction by transforming features into orthogonal component axes of maximum variance in a dataset. The goal of LDA is to find the feature subspace that optimizes class separability and reduce dimensionality (see figure below). Hence, LDA is a supervised algorithm. An in-depth description of PCA and LDA can be found in this book: Python Machine Learning by Sebastian Raschka, Chapter 5.

An implementation of LDA can be found at this link: LDA Using Iris Dataset

In machine learning, the dataset is often partitioned into training and testing sets. The model is trained on the training dataset and then tested on the testing dataset. The testing dataset thus acts as the unseen dataset, which can be used to estimate a generalization error (the error expected when the model is applied to a real-world dataset after the model has been deployed). In scikit-learn, the train/test split estimator can be used to split the dataset as follows:

Here, X is the features matrix, and y is the target variable. In this case, the testing dataset is set to 30%.

These are machine learning algorithms that perform learning by studying the relationship between the feature variables and the known target variable. Supervised learning has two subcategories:

In a machine learning model, there are two types of parameters:

a) Model Parameters: These are the parameters in the model that must be determined using the training data set. These are the fitted parameters. For example, suppose we have a model such as house price = a + b*(age) + c*(size), to estimate the cost of houses based on the age of the house and its size (square foot), then a, b, and c will be our model or fitted parameters.

b) Hyperparameters: These are adjustable parameters that must be tuned to obtain a model with optimal performance. An example of a hyperparameter is shown here:

It is important that during training, the hyperparameters be tuned to obtain the model with the best performance (with the best-fitted parameters).

Cross-validation is a method of evaluating a machine learning model’s performance across random samples of the dataset. This assures that any biases in the dataset are captured. Cross-validation can help us to obtain reliable estimates of the model’s generalization error, that is, how well the model performs on unseen data.

Here is the k-fold cross-validation pseudocode: 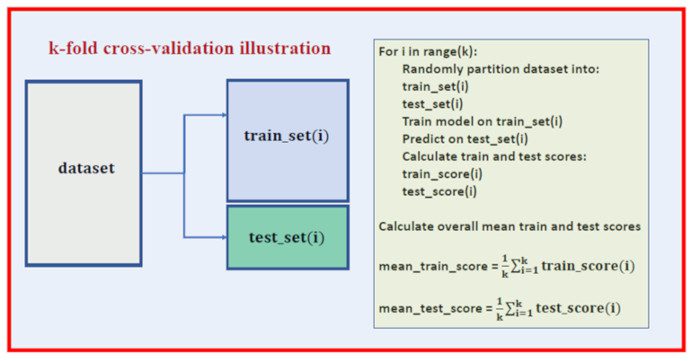 In statistics and machine learning, the bias-variance tradeoff is the property of a set of predictive models whereby models with a lower bias in parameter estimation have a higher variance of the parameter estimates across samples and vice versa. The bias-variance dilemma or problem is the conflict in trying to simultaneously minimize these two sources of error that prevent supervised learning algorithms from generalizing beyond their training set: 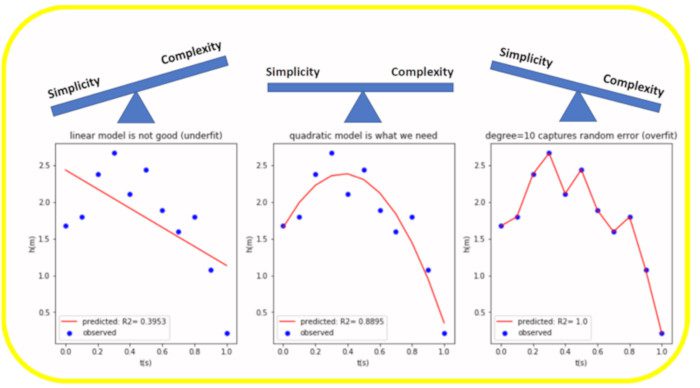 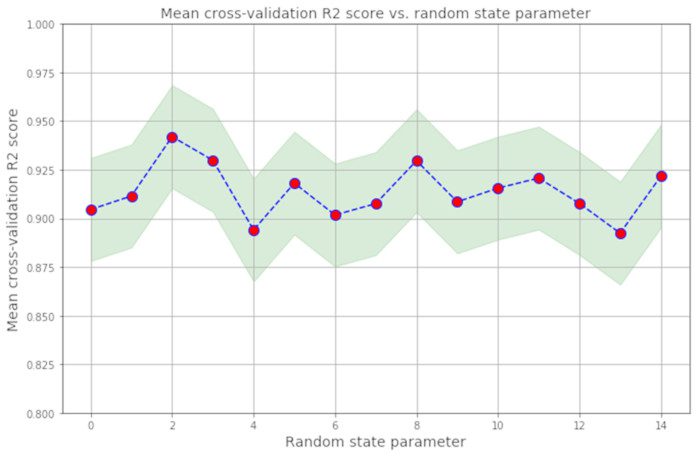 b) Basic Linear Algebra: Linear algebra is the most important math skill in machine learning. A data set is represented as a matrix. Linear algebra is used in data preprocessing, data transformation, dimensionality reduction, and model evaluation. Here are the topics you need to be familiar with:

c) Optimization Methods: Most machine learning algorithms perform predictive modeling by minimizing an objective function, thereby learning the weights that must be applied to the testing data in order to obtain the predicted labels. Here are the topics you need to be familiar with:

Statistics and Probability are used for visualization of features, data preprocessing, feature transformation, data imputation, dimensionality reduction, feature engineering, model evaluation, etc. Here are the topics you need to be familiar with:

Here are some educational resources on Central Limit Theorem and Bayes Theorem:

A typical data analysis project may involve several parts, each including several data files and different scripts with code. Keeping all these organized can be challenging. Productivity tools help you to keep projects organized and to maintain a record of your completed projects. Some essential productivity tools for practicing data scientists include tools such as Unix/Linux, git and GitHub, RStudio, and Jupyter Notebook. Find out more about productivity tools here: Productivity Tools in Machine Learning