Accelerate Your Career in Data Science


Fast-track your promotion with a degree in data science. The part-time Master of Science in Analytics allows you to balance your personal and professional life while mastering the cutting-edge technology defining the industry today. 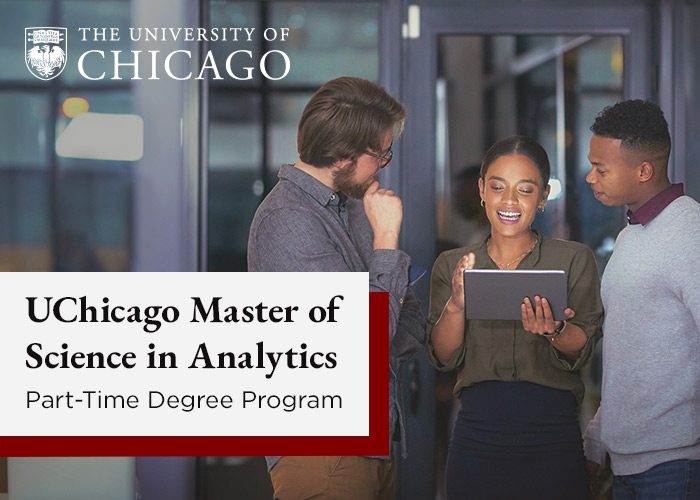 Nick Caldicott was working as an analytics manager at food giant ConAgra when he enrolled in the part-time Master of Science in Analytics program at the University of Chicago. Since earning his BS in Management Information Systems and Marketing, Caldicott had worked as an analyst—first in health marketing, next as a consultant. But he wanted something more.

“I wanted to become a data scientist,” he says.

Designed for working professionals, the part-time MS in Analytics program’s flexible schedule and hybrid learning model seemed like the right fit. Although Caldicott had been hired at ConAgra only shortly before he began his studies, his company encouraged him to pursue the degree—and the benefits of that decision became immediately apparent.

“Very frequently, there were projects I was working on where I would make connections to something I learned in class and then overlaid that on a food data set,” he says. “I was able to talk through what I learned with my managers and my stakeholders at my company. There was a great back and forth between what I learned and what I was doing at work.”

In addition to providing him with new skills, Caldicott’s classes led him to experience a paradigm shift in how he thought about data and its uses: what once seemed purely academic became practicable.  “The professors did a great job of bringing real-world data sets and real-world problems to class,” he explains.

An important part of the MScA program is the Capstone Project, an ongoing exercise that pairs students with a business in need of data science to solve a challenge it faces. Caldicott learned much from his efforts.

“Being able to do a project end-to-end and make sure it’s valuable for a business to use, having that in mind at all times, and making a business problem into an analytics problem, then solving the analytics problem and turning it into a business solution was incredibly helpful,” he says. “That the Capstone project was a professional partnership was really important.”

After matriculating last spring, Caldicott was promoted to Lead Data Scientist at ConAgra. He attributes his success to completing the program. “It’s been incredibly helpful,” he says.

Find out how you can transform your career in data science on your schedule.