Optimizing Genes with a Genetic Algorithm

In the simplest terms genetic algorithms simulate a population where each individual is a possible “solution” and let survival of the fittest do its thing.

By David Wells, Bioinformatician on April 22, 2022 in Machine Learning 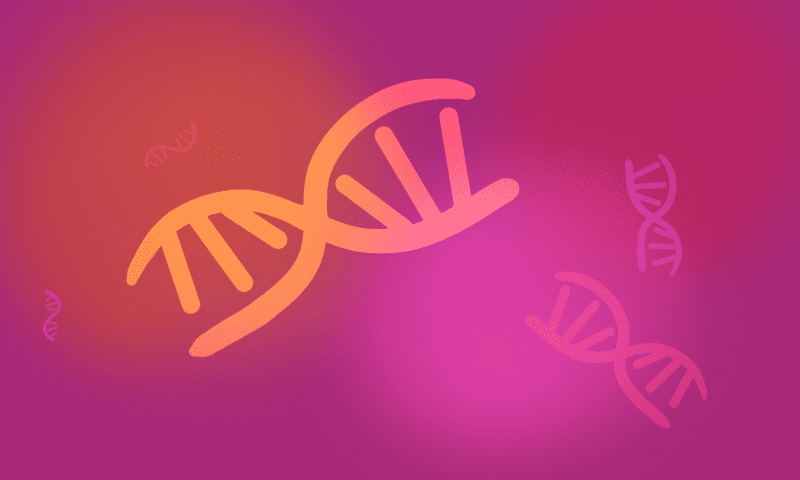 Genetic algorithms can be a great way to tackle an optimisation problem because they can reliably find a good solution, even in a complex fitness landscape with many local optima. I’m using this technique for optimising a DNA sequence to accurately produce lots of a useful protein. Here we will be looking at the key, big picture steps of implementing a genetic algorithm rather than diving into the theory behind them, but there are plenty more detailed descriptions out there, such as here and here.

In the simplest terms genetic algorithms simulate a population where each individual is a possible “solution” and let survival of the fittest do its thing. The difficult part, as with much of data science and machine learning, is how to frame the question for the computer. We will see how to improve your solutions just by framing the question better.

All the code is available at https://github.com/DAWells/codon_path

DNA codes for amino acids, the building blocks of proteins. Three DNA letters (A, T, G, or C) in a row code for a single amino acid and is called a codon. Several different codons could encode the same amino acid. For example CAA and CAG both code for the amino acid Glutamine. Given a known protein we want to code, determining the required sequence of codons should be straightforward. In reality when the protein is synthesised the previous codon may have an effect on adding the next amino acid, it may take longer or make a mistake. Although several codons can do the same job, not all pairs work well together. My aim is to preferentially use these pairs that work well together.

So why is this important? Optimising a gene in this way can allow you to get more of your desired protein. A protein you might need to catalyse a chemical reaction, or produce a therapeutic drug. Why is this difficult? Each codon is part of two pairs, this means you can’t select the best pairs individually. Instead you have to consider all pairs at once. In the example below, there’s a choice of two codons at each position and how well adjacent codons work together is indicated by the colour connecting them (green>yellow>red). A good codon pair may lock you into a bad pair next as shown below. 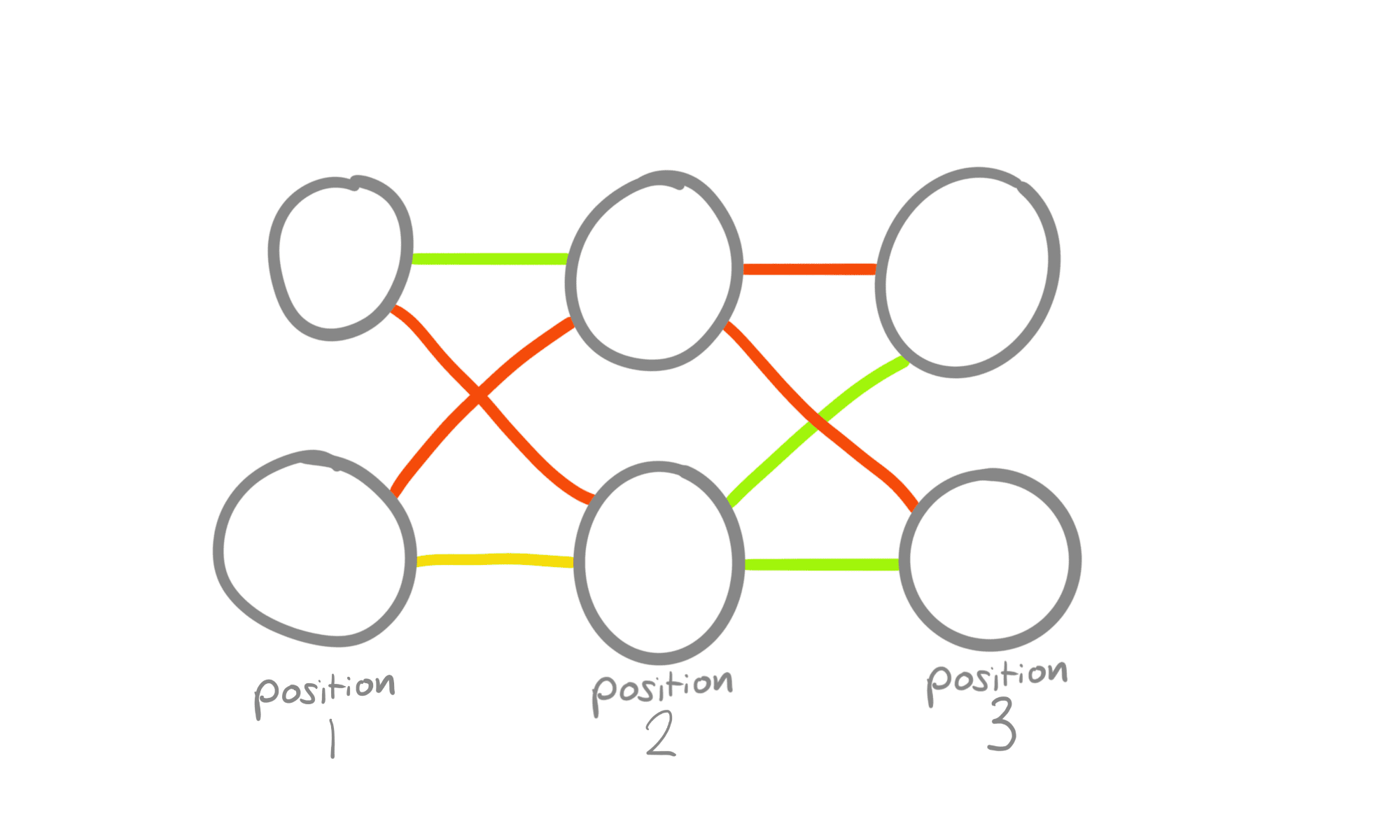 The first thing you need for a genetic algorithm is a score function, some way to measure the fitness of possible solutions to your problem. This is used to decide which solutions get to “reproduce”. Deciding how to calculate this number is a vital step to any optimisation problem as it has to capture all the complexity of the problem in this one value. Fortunately for me, Coleman et al 2008 calculated a score for each pair of codons for all 3,721 possible codon pairs and we are using this as a measure of how well a pair will work during protein synthesis. So for any DNA sequence I can add up this value for each consecutive pair of codons in my sequence and calculate a score; the higher this score, the better a solution it is for my problem.

Next we need to frame the question for the genetic algorithm, what form will each possible solution take while the algorithm optimises it? The most obvious representation for specifying codons would be a vector where each element is a codon, represented by a number 1-61 (for each of the 61 codons). But this is too much freedom for our algorithm because it can swap in a codon that produces the wrong amino acid.

A better formulation is each element representing one of the codons that encodes the correct amino acid. Figuring out what “the correct amino acid” is can be abstracted away to the scoring function, which means our genetic algorithm can’t break anything. Any single amino acid can be coded for by up to 6 different codons, so our solution vector contains integer values ranging 0-5 encoding the 6 codons, and is as long as the string of amino acids we’re optimising (or a third as long as the DNA gene).

Another key benefit of making our solution vectors from 1-6 rather than 1-61 is a massive reduction in problem space. If L is the length of our vector there are 6L rather than 61L possible solutions to explore. A smaller problem space means a faster answer, which is particularly important with genetic algorithms. Although they find good solutions, they do it slowly. If I hadn’t reformatted to a smaller problem space I wouldn’t have had time to optimise genes.

There is an issue with using 0-5 to represent codons though, not all amino acids have 6 codons e.g. Lysine only has 2. The genetic algorithm might use the 5th Lysine codon (which doesn’t exist); what then? You could have the score function deduct points every time an invalid codon is used and hope that this pushes you towards good and valid solutions but this is not using our problem space efficiently. Every possible solution with an invalid codon in it is definitely not the best solution. This means lots of tried solutions in our 6L space (which is still an awful lot) are wasted effort.

Instead of a penalty, a better solution is modulo remainders. Whenever the genetic algorithm asked for a codon outside of the list of real codons, I looped it back to the start of the list. So if it asked for the 5th codon when there were only 3, it looked back to the start and counted the remaining 2. This means that any solution explored by the genetic algorithm could potentially be the optimal solution. Because of this, we should get better answers, faster. In the plot below we can see that the penalty algorithm is always behind the modulo algorithm and takes 30 generations just to get to the same start point. 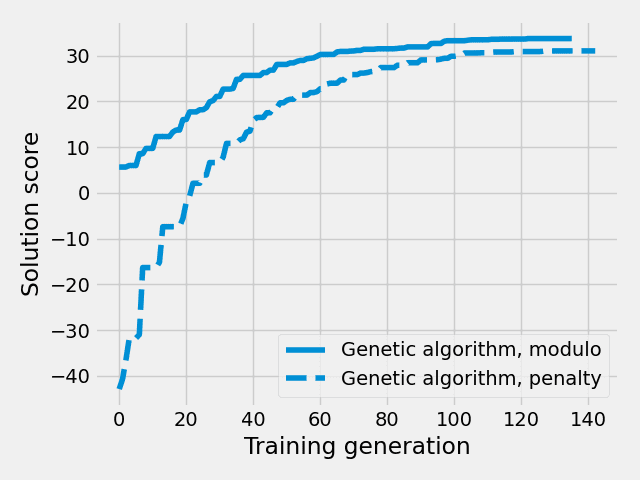 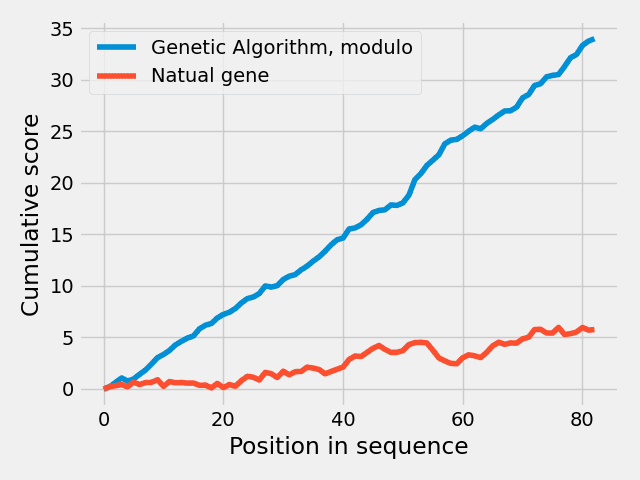 To get the most out of your genetic algorithms you need to frame your question such that problem space is as small and efficiently explored as possible. You also need a fitness function that accurately captures the essence of what you’re trying to achieve. So much of data science is just this, translating real world problems into numbers so the computer can help you. With practice you can frame the same question in multiple ways. Hopefully this post has shown that the same question, if framed properly, can get you a better answer.

David Wells is a bioinformatician applying machine learning to genomics to develop vaccines.