Machine Learning Is Not Like Your Brain Part Two: Perceptrons vs Neurons

An ML system requiring thousands of tagged samples is fundamentally different from the mind of a child, which can learn from just a few experiences of untagged data.

By Charles Simon, CEO of FutureAI on May 24, 2022 in Artificial Intelligence

While today’s artificial intelligence (AI) is able to do some extraordinary things, its functionality has very little to do with the way in which a human brain works to achieve the same tasks. AI – and specifically machine learning (ML) – works by analyzing massive data sets, looking for patterns and correlations without understanding the data it is processing. As a result, an ML system requiring thousands of tagged samples is fundamentally different from the mind of a child, which can learn from just a few experiences of untagged data.

With that in mind, this nine-part series examines in progressively greater detail the capabilities and limitations of biological neurons and how these relate to ML. In Part One, we examined how a neuron’s slowness makes its approach to learning through thousands of training samples implausible. In Part Two, we’ll take a look at the fundamental algorithm of the perceptron and how it differs from any model of a biological neuron which involves spikes.

The perceptron underlying most ML algorithms is fundamentally different from any model of a biological neuron. The perceptron has a value calculated as a function of the sum of incoming signals via synapses, each of which is the product of the synapse weight and the value of the perceptron from which it comes. In contrast, the biological neuron accumulates charge over time until a threshold is reached, giving it a modicum of memory.

To provide an illustration, synapses with positive weights contribute to the internal charge of a neuron and stimulate it to fire when the accumulated charge exceeds a threshold level (defined as 1), while negatively weighted synapses inhibit firing. Consider a neuron stimulated by two inputs weighted .5 and -.5. If the input sequence is .5, -.5, .5, -.5, the neuron will never fire because each positive input is followed by a negative input which zeros out the accumulated charge. If the inputs fire in the sequence of .5, .5, -.5, -.5, the neuron will fire after the second positively-weighted spike. 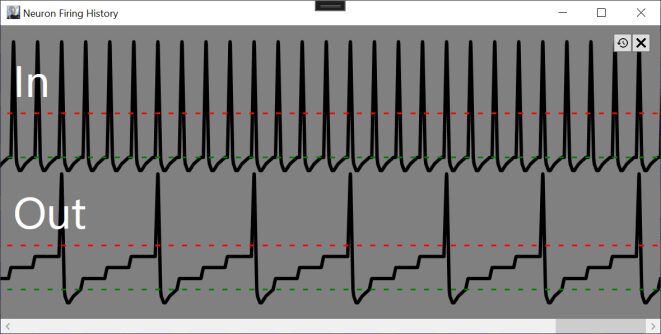 Illustrating how a neuron (Out) stimulated with a weight of .25 will accumulate charge and fire every 4th input spike of the input neuron (In). 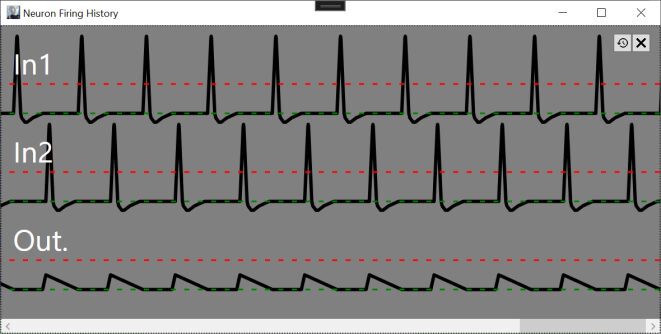 With In1 and In2 stimulateing with weights of .5 and -.5 respectively Out will never fire. 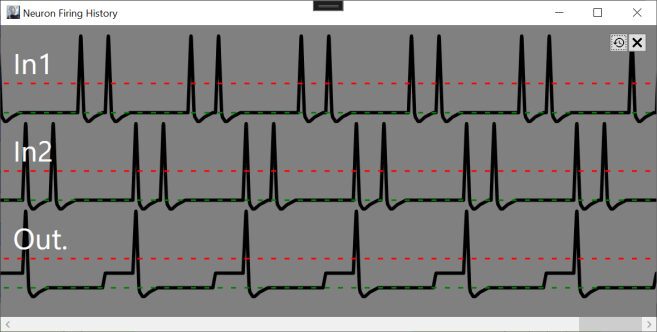 But changing the timing of the incoming spikes lets Out fire. The perceptron model doesn’t support this function because it ignores the timing/phase of incoming signals.

In both cases, the average input frequency is .5 (half the maximum firing rate). The perceptron model will give the same output, 0, in either case, because the summation of weighted inputs or .5*.5 + .5*-.5 will always equal 0 regardless of the input timing. This means that the perceptron model cannot be reliably implemented in biological neurons and vice versa.

This is such an essential difference between the neural network and the biological neuron that I will devote a separate article to exploring it, along with the other biological factors which make today’s AI different from the brain’s function at a very fundamental level.

The biological neuron models allow for single spikes to have meaning. The overwhelming majority of the brain’s neurons spike only rarely, so it is likely that many neurons do have specific meanings. For example, since you understand what a ball is, it is likely that your brain contains a “ball neuron” (or perhaps many) that fires if you see a ball or hear the word. In a biological model, that neuron might fire only once when a ball is recognized. The perceptron model of firing rates doesn’t allow this, however, because the firing rate of a single spike isn’t defined.

In the next article, I’ll discuss how the connections in the brain are not organized in the orderly layers of ML, and how this requires some modification to the basic perceptron algorithm which may prevent backpropagation from working at all.

Next up: Fundamental Architecture

KDnuggets Home » » Machine Learning Is Not Like Your Brain Part Two: Perceptrons vs Neurons