A Comprehensive Guide to SHAP and Shapley Values

Imagine you are trying to train a machine learning model to predict whether an ad is clicked by a particular person. After receiving some information about a person, the model predicts that a person will not click on an ad. 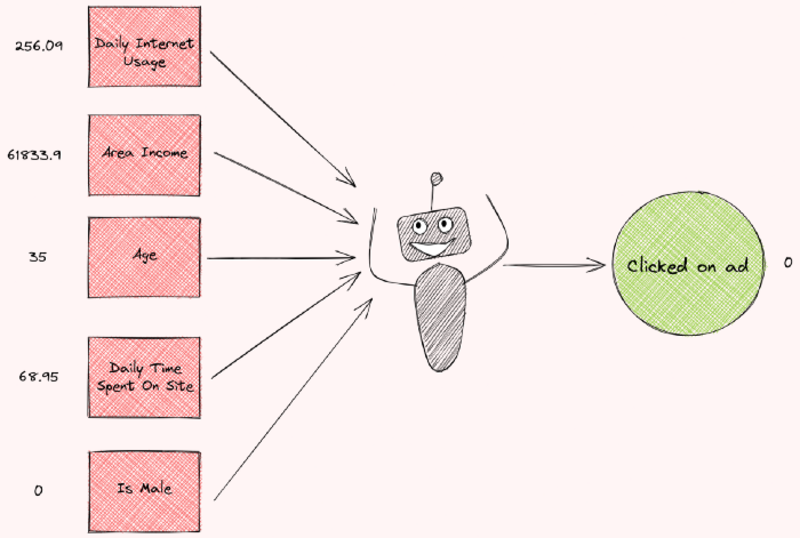 That is when Shapley value comes in handy.

What is Shapley Value?

The Shapley value is a method used in game theory that involves fairly distributing both gains and costs to actors working in a coalition.

Since each actor contributes differently to the coalition, the Shapley value makes sure that each actor gets a fair share depending on how much they contribute.

Shapley value is used for a wide range of problems that question the contribution of each worker/feature in a group. To understand how Shapley value works, let’s imagine that your company has just done A/B testing, where they test different combinations of advertisement strategies.

The revenues for each strategy in a specific month are: 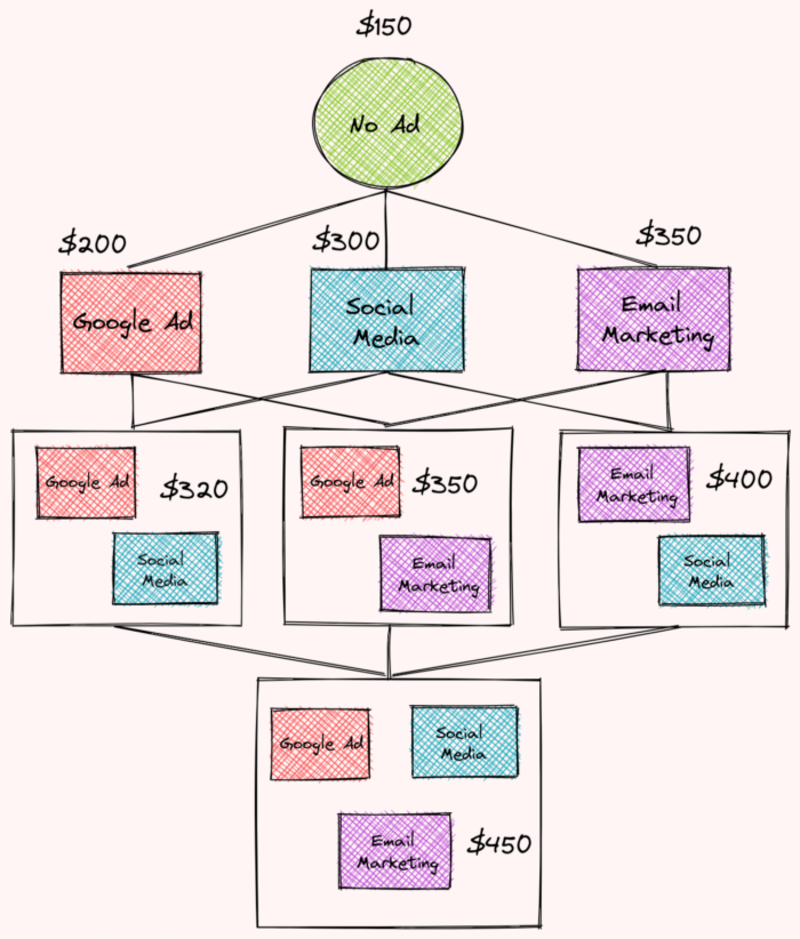 The difference in revenues between using three ads and using no ad is $300. How much does each ad contribute to this difference? 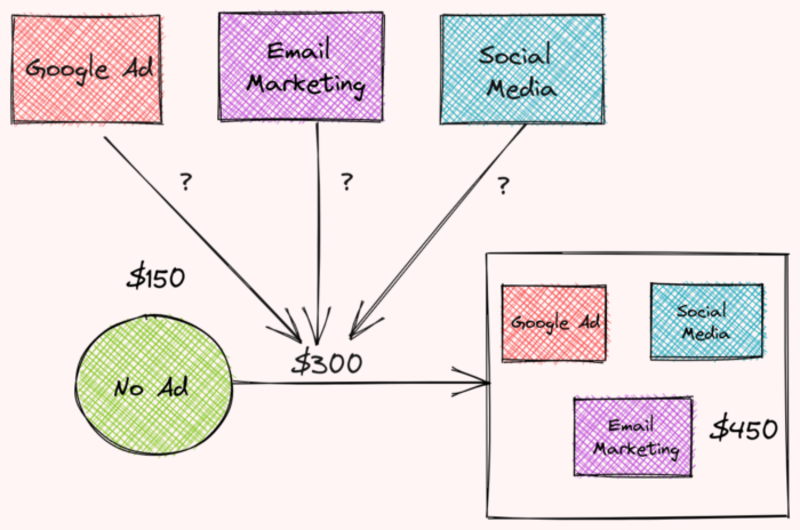 We can figure that out by calculating the Shapley value for each type of advertisement. This article provides an excellent way to calculate the Shap value. I will summarize it here.

Let’s find the marginal contribution of Google advertisement and its weights.

First, we will find the marginal contribution of Google advertisement to the following groups: 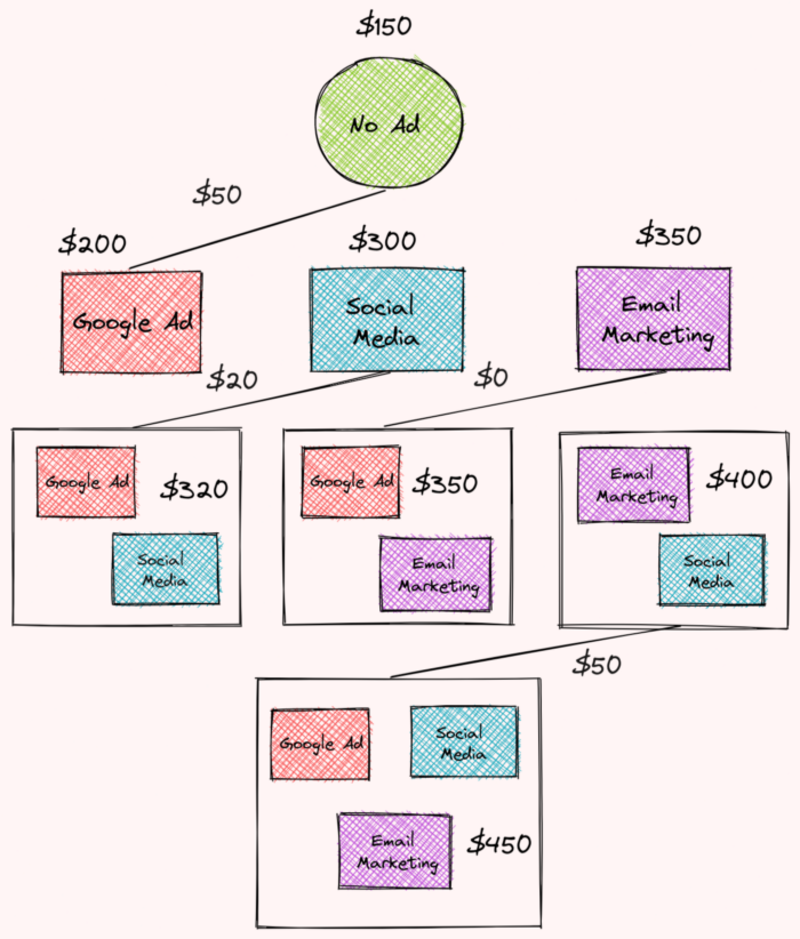 Then we will assign weights based on the number of edges in each level. We saw that: 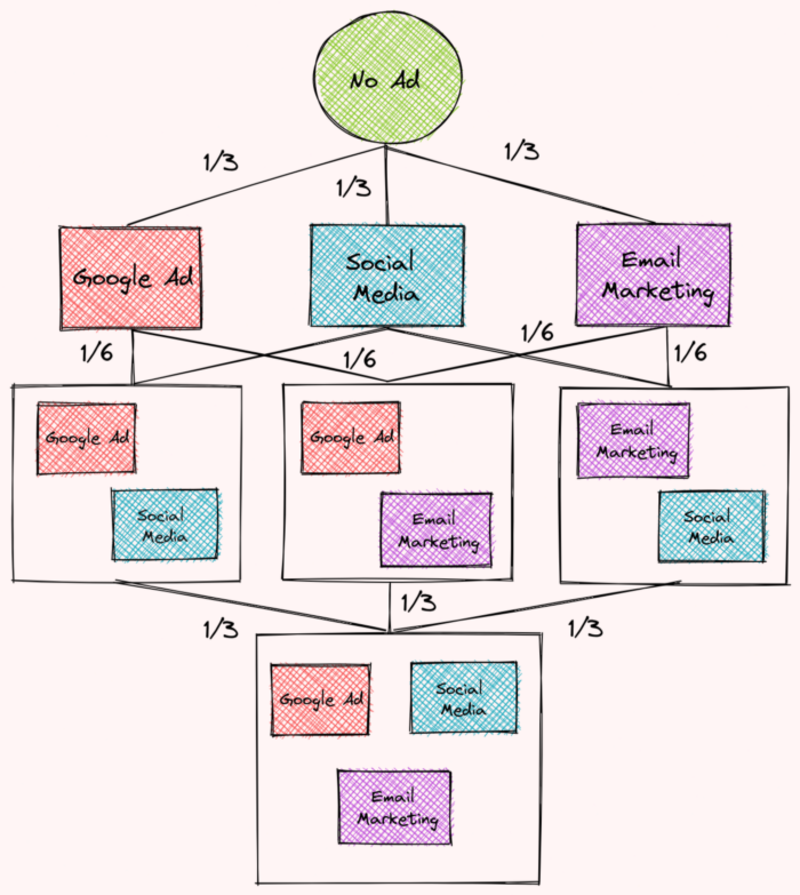 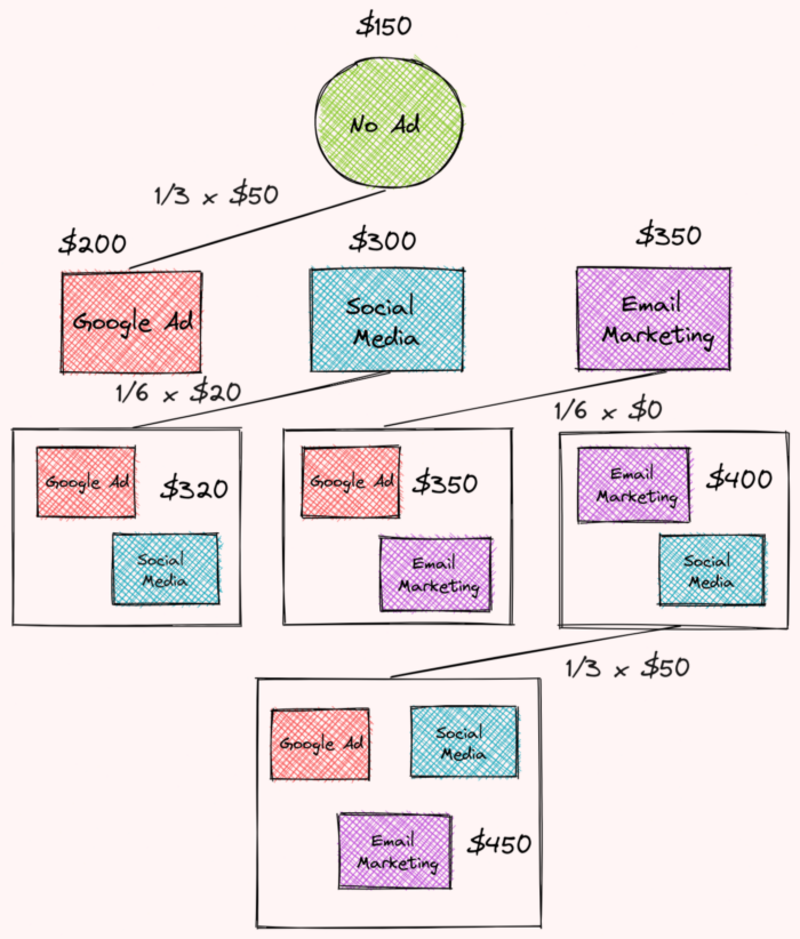 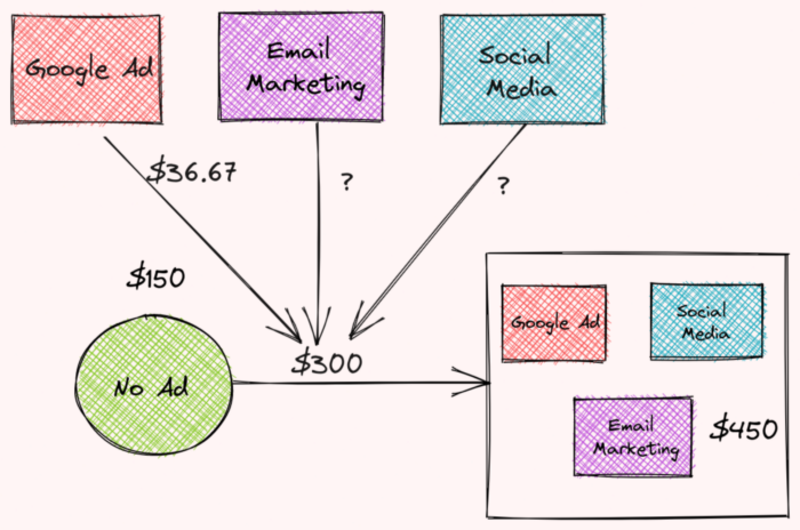 Repeat the steps above for two other advertisement strategies, we can see that:

Together they contribute $300 to the difference between using 3 different types of advertisement and using no advertisement! Pretty cool, isn’t it?

Now that we understand the Shapley value, let’s see how we can use it to interpret a machine learning model.

SHAP is a Python library that uses Shapley values to explain the output of any machine learning model.

To understand how SHAP works, we will experiment with an advertising dataset:

We will build a machine learning model to predict whether a user clicked on an ad based on some information about that person.

We will use Patsy to turn the DataFrame into an array of features and an array of target values:

Split the data into train and test sets:

Next, we will use XGBoost to build a model and make predictions:

To see how well the model performs, we will use the F1 score:

The model did a good job of predicting whether a user clicked an ad. But how did it come up with such predictions? How much did each feature contribute to the difference between the final prediction and the average prediction?

Note that this problem is very similar to the problem we addressed at the beginning of the article.

That is why finding the Shapley value of each feature can help us determine their contribution. The steps to get the importance of the feature i, where i is the index of features, is similar to before:

Aha! Now we know the contribution of each feature to the first prediction. Explanations for the graph above:

For each of these subsets, SHAP doesn’t remove a feature then retrain the model but replaces that feature with the average value of that feature, then generates the predictions.

We should expect the total contribution to be equal to the difference between the prediction and the mean prediction. Let’s check that:

Instead of looking at each individual instance, we can visualize the overall impact of these features across multiple instances using SHAP summary plot:

The SHAP summary plot tells us the most important features and their range of effects over the dataset.

From the plot above, we can gain some interesting insights into the model’s predictions:

We can also get a global feature importance plot using the SHAP bar plot.

We can observe the effect of a single feature on all predictions made by the model using the SHAP dependence scatter plot. 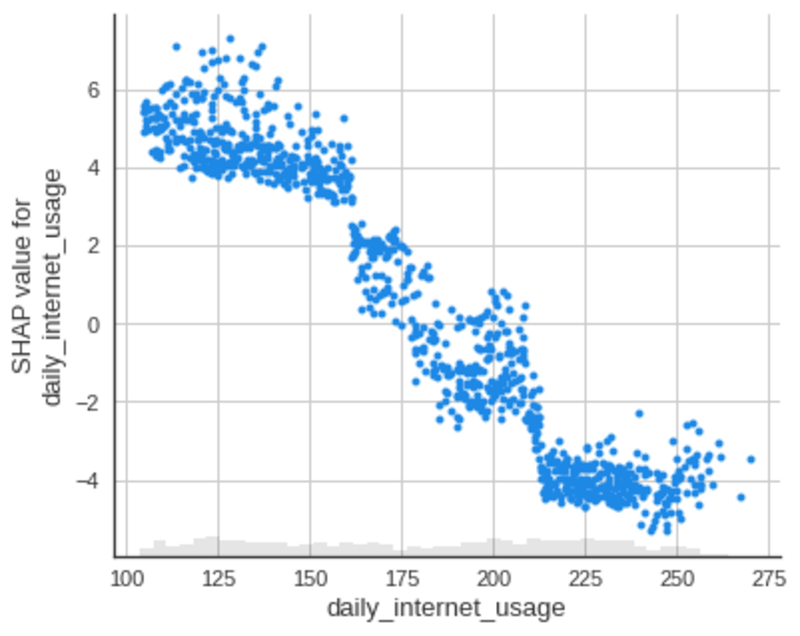 We can also observe the interaction between the daily internet usage feature with other features in the same plot by adding color=shap_values .

The scatter plot will attempt to pick out the feature column with the strongest interaction with daily internet usage, which is daily time spent on site. 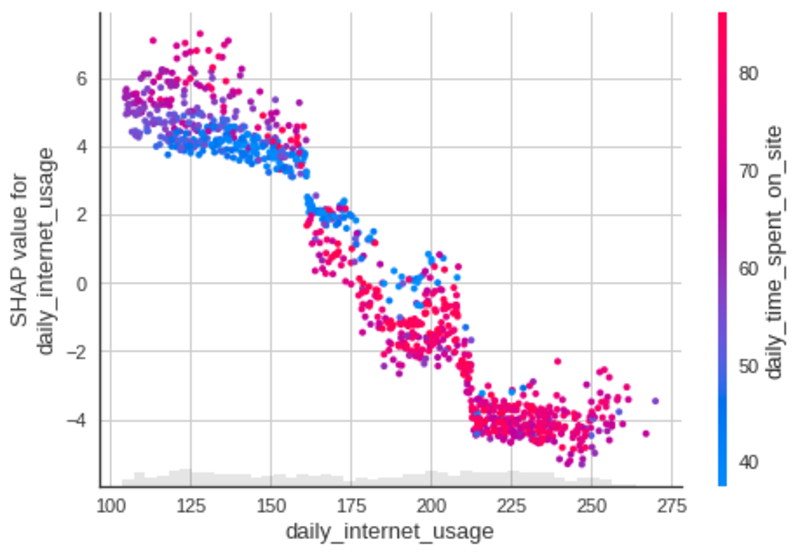 Cool! From the plot above, we can see that a person who uses the internet for 150 minutes per day and spends a small amount of time on the website per day is more likely to click the ad.

Let’s look at the scatter plots of some other features: 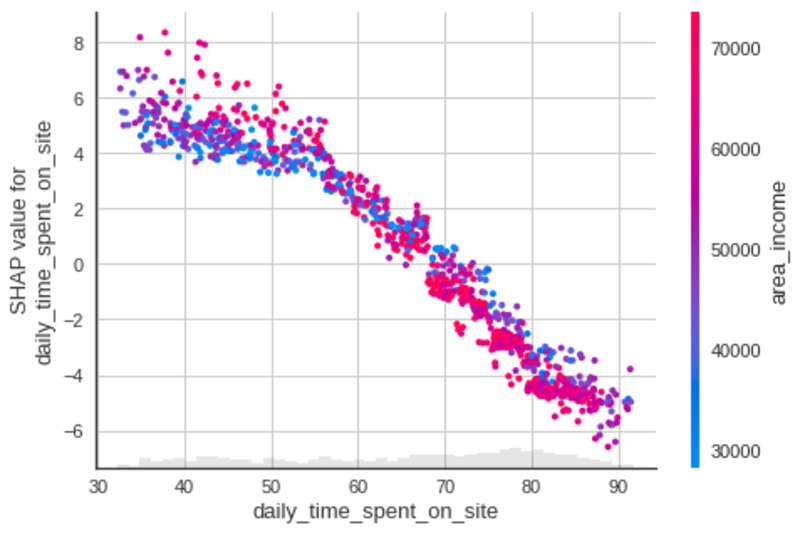 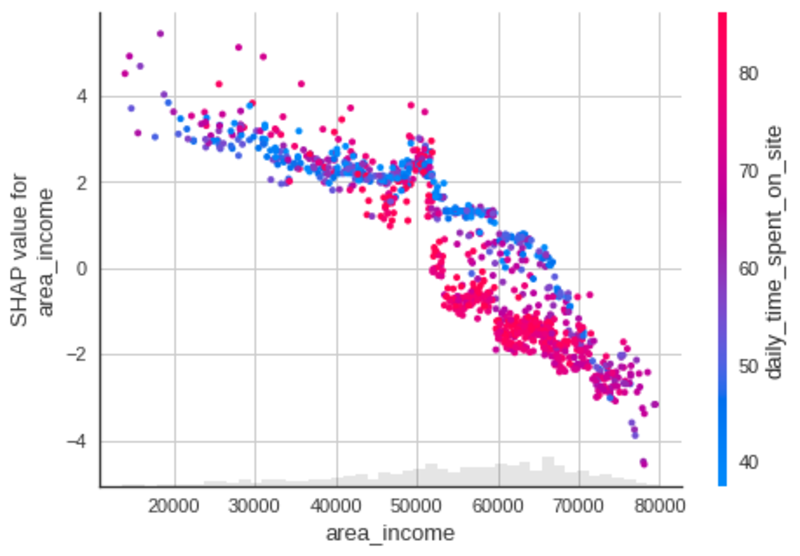 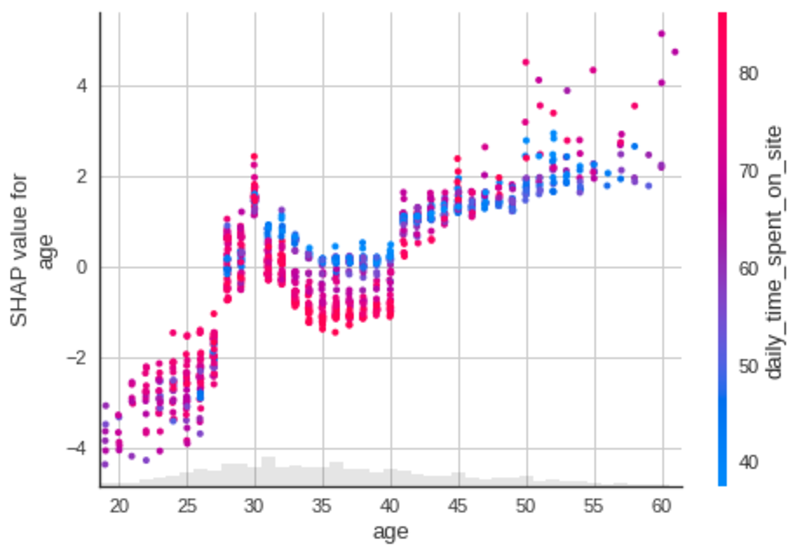 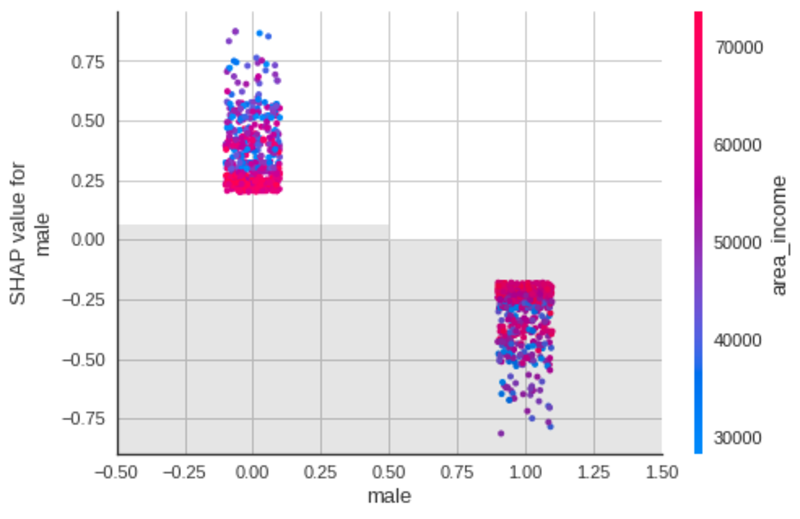 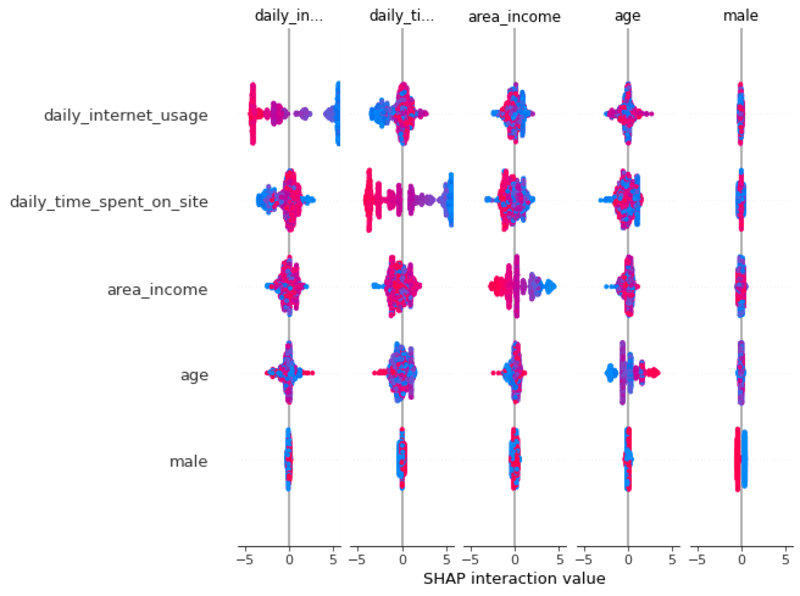 I recommend checking out SHAP’s documentation to learn more about other applications of SHAP.

Feel free to play with the source code in this interactive notebook or fork my repository.

Mazzanti, S. (2021, April 21). SHAP explained the way I wish someone explained it to me. Medium. Retrieved September 23, 2021, from https://towardsdatascience.com/shap-explained-the-way-i-wish-someone-explained-it-to-me-ab81cc69ef30.

Khuyen Tran is a prolific data science writer, and has written an impressive collection of useful data science topics along with code and articles. Khuyne is currently looking for a machine learning engineer role, a data scientist role, or a developer advocate role in Bay Area after May 2022, so please reach out if you are looking for someone with her set of skills.