The latest KDnuggets Poll asked:
What was the largest database / dataset you analyzed? 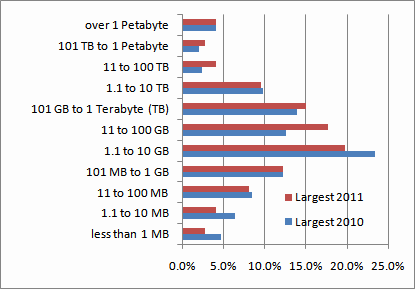 Regional breakdown shows that US leads in percent of data miners who worked with terabyte range datasets (about 30%).
(Note: Australia/NZ region not included, since not enough responses were received).


Here is another breakdown of Largest Dataset Analyzed by region. Gregory Piatetsky
see next KDnuggets Poll: Which data mining/analytic tools you used in the past 12 months for a real project
www.kdnuggets.com/2011/05/new-poll-analytics-data-mining-tools.html

Zoltán Prekopcsák
It would be interesting to know what tools they use for analyzing TBs of data.