KDnuggets Home » News » 2011 » Sep » News Briefs » Statistics could have detected manipulated Greek finances  (  )
Analysis of official statistics of the EU member states for the last 11 years clearly shows that Greek financial data was the most suspect.

If we had known what we know today, Greece would not have been able to enter the Euro area. The macroeconomic data the country reported to Eurostat in Luxembourg were heavily tweaked. Unfortunately, however, this only became clear years after it was too late.

An early warning system could have avoided such a rude awakening - and, astonishingly, it could be set up rather easily. 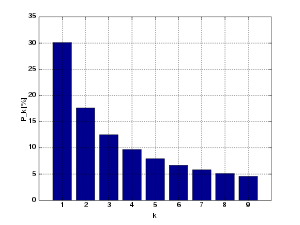 From Wikipedia: The distribution of first digits, according to Benford's law. Each bar represents a digit, and the height of the bar is the percentage of numbers that start with that digit.

Benford's law delivers circumstantial evidence about data manipulation, as four German economists show in a paper entitled Fact and Fiction in EU-Governmental Economic Data that is forthcoming in the German Economic Review.

The authors of the forthcoming paper analysed official statistics of the EU member states from the last eleven years by counting the first digits. They looked at 130 different values per country and year. Among other things, they looked at the total level of debt, the cash reserves of the government and the pensions of retired civil servants.

The result is straightforward. Judged by Benford's Law, Greece produces the dodgiest data. The distribution of the digits differ the most from the Benford distribution. This is a strong indication of creative accounting by the Greek government.

Benford's Law could raise a flag with regards to potential manipulation and could guide the supervisory effort. For example, the Benford test shows that in the year of 2000 the Greek statistics were particularly shady. One year later Greece finally joined the Euro area.