)
computational journalism is a rich field worthy of attention from the database (and analytics) community, from both intellectual and social perspectives.

Computational Journalism: A Call to Arms to Database Researchers 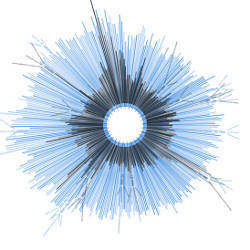 Visualization of the frequency of the words "hope" (blue) and "crisis" (graphite) published in The New York Times, 1981-2010. Credit: Jer Thorp,
from CACM Oct 2011 article on computational journalism

The digital age has brought sweeping changes to the news media. While online consumption of news is on the rise, fewer people today read newspapers. Newspaper advertising revenues fell by a total of 23% in 2007 and 2008, and tumbled 26% more in 2009 [1]. This continuing decline of the traditional news media affects not only how news are disseminated and consumed, but also how much and what types of news are produced, which have profound impact on the well-being of our society. In the past, we have come to rely heavily upon the traditional news organizations for their investigative reporting to hold governments, corporations, and powerful individuals accountable to our society. The decline of traditional media has led to dwindling support for this style of journalism, which is considered as cost-intensive and having little revenue-generating potential.

...
Luckily, a second trend is on our side: the continuing advances in computing. We are connecting people together on unprecedented scales. Data collection, management, and analysis have become ever more efficient, scalable, and sophisticated. The amount of data available to the public in a digital form has surged. Problems of increasing size and complexity are being tackled by computation. Could computing technology-which has played no small part in the decline of the traditional news media-turn out to be a savior of journalism's watchdog tradition?

We present a more focused perspective from database researchers by outlining a vision for a system to support mass collaboration of investigative journalists and concerned citizens. We discuss several features of the system as a sample of interesting database research challenges. We argue that computational journalism is a rich field worthy of attention from the database community, from both intellectual and social perspectives.

Computational Journalism, Communications of the ACM, Oct 2011
How computer scientists can empower journalists, democracy's watchdogs, in the production of news in the public interest.