)
the winner is Dr. Christopher Clifton (Purdue University), recognized for a long history of promoting ICDM and the data mining field in general.

The IEEE ICDM Outstanding Award is given to one individual or one group who has made major service contributions that have promoted data mining as a field and ICDM as the world's premier research conference in data mining. The 2011 IEEE ICDM Outstanding Service Award goes to Dr. Christopher Clifton, Associate Professor of Computer Science and (by courtesy) of Statistics at Purdue University. Clifton has a long history of promoting ICDM and the data mining field in general. 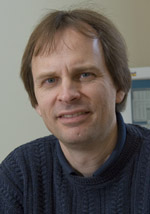 He has been active in ICDM since it's 2001 inception, serving as Tutorials Chair and as a member of the Program Committee in that inaugural year. He has served as Program Co-Chair (ICDM '06), General Co-Chair (ICDM '07), Program Vice-Char (ICDM '03), and Program Committee in '04, '08, and '09. He also organized the first workshop on Privacy, Security, and Data Mining at ICDM '02, and co-organized the workshop on Privacy-Preserving Data Mining at ICDM '03.

He has served the broader data mining community as well, serving as Program Co-Chair (2011) and Area Chair (2008) of the SIAM International Conference on Data Mining. He served as Teasurer (2005) and a Senior Program Committee member (2007, 2009, 2010) of the ACM SIGKDD conference. He served as an associate editor of IEEE Transactions on Knowledge and Data Engineering from 2003-2007, and Survey Editor 2007-2011. He has been on the Editorial Board of Knowledge and Information Systems since 2000.

Clifton has been particularly active in promoting privacy-preserving data mining, in the wake of the proposal in the U.S. Senate of the Data Mining Moratorium Act of 2003. He has over 50 publications on this topic, has given tutorials at KDD and ECML/PKDD, and founded workshops. He has also reached outside the computing community, giving talks and participating in panels at several forums for law and public policy experts, advising them on the reality of data mining and the difference from the perceived risks.